Arts & Culture
MNopedia
This content is shared with MinnPost by MNopedia, the digital encyclopedia created by the Minnesota Historical Society and supported by the Legacy Amendment’s Arts and Cultural Heritage Fund.
Sept. 30, 2014 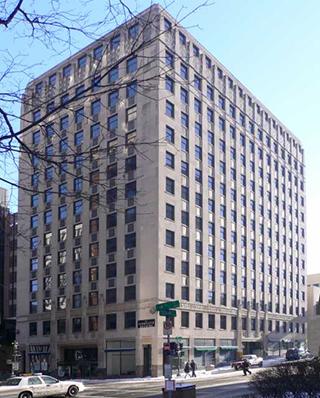 Built in 1929, the Minnesota Building represents a turning point in the economic history of downtown St. Paul and the architectural history of the entire Twin Cities area.

In 1922 business and government leaders in St. Paul met to discuss the development of the city. Their main concern was defining a downtown and, within it, a business district. For decades business had been divided between Lowertown, along the river, and the office buildings north of it. Some argued for a broad geographic definition of downtown. They defined its borders as the Mississippi River to the south, the Summit neighborhood to the west, and Dayton’s Bluff to the east.

A more focused definition won in the end. The leaders decided to center their attention on a new business district. The district became known as the “business loop.” The loop was encompassed by modern-day Kellogg Boulevard, Wacouta Street, Twelfth Street, and Main Street (now mostly eliminated). The district included existing business buildings but new construction was desired. Except for the Hotel Lowry, no multistory buildings were erected in downtown St. Paul from 1919 to 1929.

In 1928 developers purchased the Minnesota Club building and razed it. They commissioned St. Paul native and architect Charles Hausler to design a new office building. Hausler had apprenticed with Louis Sullivan in Chicago. He then served as St. Paul’s city architect from 1914 to 1923.

Construction of the Minnesota Building began in June of 1929 and progressed smoothly. It was dedicated in October of 1929, having cost $950,000 to build. On November 12, 450 people attended an open house celebrating its completion. Its creation ended a decade-long drought of construction in downtown St. Paul. The building was the first in a new series to be built in the “business loop.” It housed upscale offices and provided a prestigious address for companies.

The exterior of the building features traditional art-deco styling. It emphasizes geometric forms and symmetry. The pedestrian level has tile and terracotta stone work. The main entrances are flanked by large display windows. Over the main entrance is a stone medallion of the state of Minnesota guarded by two stylized eagles. The secondary facades display the words “MINNESOTA BLDG” between the twelfth and thirteenth floors. The interior has bright terrazzo floors, marble walls, geometric plaster work, bronze lamps, and hardware.

Throughout the twentieth century the Minnesota Building served St. Paul as an office building and business center. At the beginning of the twenty-first century the Twin Cities office market declined. Businesses consolidated, or left the cities for more modern accommodations in the suburbs. By 2006 the building was vacant. Through public investment it was renovated into a housing complex. Several government-subsidized apartments were set aside for chronically homeless people. On February 24, 2011 the Minnesota Building was rededicated by St. Paul Mayor Chris Coleman and St. Paul developers. It provided affordable housing for working class St. Paul residents along with business space on the ground level.

Aside from the early addition of the thirteenth floor, the structure is mostly unaltered. The exterior and public spaces of the interior are well preserved. As part of the building’s redevelopment efforts were made to protect it. In 2009 the Minnesota Building was added to the National Register of Historic Places.