Arts & Culture
MNopedia
This content is shared with MinnPost by MNopedia, the digital encyclopedia created by the Minnesota Historical Society and supported by the Legacy Amendment’s Arts and Cultural Heritage Fund.
Sept. 16, 2014 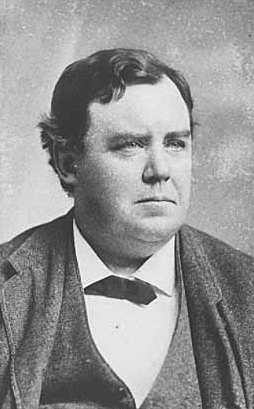 Ignatius Donnelly was the most widely known Minnesotan of the nineteenth century. As a writer, orator, and social thinker, he enjoyed fame in the U.S. and overseas. As a politician he was the nation’s most articulate spokesman for Midwestern populism. Though the highest office he held was that of U.S. congressman, he shaped Minnesota politics for more than thirty years.

Donnelly was born into an Irish Catholic family in Philadelphia in 1831. He was christened Ignatius Loyola. He later dropped his middle name along with the Catholic faith. Trained in a prestigious law office, he was swept up in the land boom of the 1850s. In 1857 he moved to Minnesota.

In partnership with John Nininger, Donnelly promoted a town site on the Mississippi River north of Hastings. The “city” of Nininger became a symbol of the speculative mania that gripped Minnesota. The town’s fortunes collapsed in the Panic of 1857, but Donnelly continued to live there throughout his life, in a large home surrounded by farm fields.

With the approach of the Civil War Donnelly became an antislavery Republican. He canvassed the state in 1859 as the running mate of Alexander Ramsey. Ramsey became governor (and Donnelly lieutenant governor) in 1860.

Three years later Donnelly was elected to the U.S. Congress. He served there from 1863 to 1869. His ambition to replace Ramsey’s leadership, however, earned him powerful enemies. Minnesota Republicans turned their backs on the young congressman.

In the 1870s Donnelly lectured around the state on behalf of the Patrons of Husbandry (the Grange). The organization of prairie farmers aimed to end their exploitation by railroads and banks. Donnelly urged political action, and at an 1873 convention he led the way in forming the Anti-Monopoly Party.

A year later he founded the Anti-Monopolist, a party newspaper. In 1876 he gave the keynote address at the national Greenback Party convention. With Donnelly’s influence, Minnesota’s Anti-Monopoly Party merged with the greenback movement.

Donnelly was elected to the state Senate three times. Nominated for U.S. Congress in 1878 by both his own party and the Democrats, he lost narrowly to Minneapolis mill owner William D. Washburn, the Republican candidate. Despite evidence of fraud at the polls, Washburn was seated.

Embittered by the stolen election, Donnelly turned from politics to writing and lecturing. In 1882 he published Atlantis: The Antediluvian World. It proved enduringly popular. He followed it in 1883 withRagnarok, another essay in pseudo-science.

The two books earned Donnelly the half-mocking nickname “the Sage of Nininger.” He justified the title further with a work in which he argued that Francis Bacon wrote the plays of Shakespeare.

In the 1880s a new wave of farm protest was rising, led by the Farmers Alliance. At the same time, a labor movement emerged in Minnesota’s cities. These new developments drew Donnelly back into politics. He ran unsuccessfully for Congress as a Democrat in 1884 and was elected to the Minnesota House as an independent candidate in 1886.

A temporary coalition of union labor and Alliance farmers nominated Donnelly for governor in 1888. He doubted its chances for success and soon withdrew. By 1890, however, a national third party had become viable.

The first national convention of the People’s Party was held in 1892. Donnelly presented the group’s platform, prefacing it with a ringing preamble that became the battle cry of populism throughout the country. Although named to head the ticket in the Minnesota governor’s race, he lost to RepublicanKnute Nelson.

Through the rest of the 1890s Donnelly continued to speak for the People’s Party. He edited its state organ, The Representative. He also served two more terms in the Minnesota Senate (1891–1894) and one in the House (1897–1898).

Meanwhile, Donnelly had become a best-selling author after publishing a novel called Caesar’s Column(1890). The dystopian tale was set in the America of the 1980s. In it, Donnelly foretold the nation’s bloody collapse through inequality and corruption. He followed it with two more novels of social commentary.

Donnelly opposed the fusion of Populists with Democrats in 1896. In 1900 he became the vice presidential candidate for what remained of the Populist Party. He died at the age of sixty-nine on January 1, 1901.

Rhoda R. Gilman has published extensively in the fields of Minnesota and Upper Midwest history. She is a founding member of Women Historians of the Midwest and a former candidate for Lieutenant Governor of Minnesota on the Green Party ticket.

This guy is the most famous Minnesotan of the 19th century