Arts & Culture
MNopedia
This content is shared with MinnPost by MNopedia, the digital encyclopedia created by the Minnesota Historical Society and supported by the Legacy Amendment’s Arts and Cultural Heritage Fund.
Oct. 21, 2014 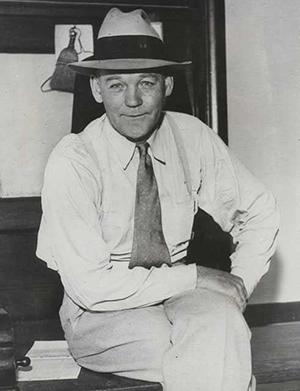 Francis H. Shoemaker’s 1931–1932 journey from a Leavenworth prison cell to a seat in the U.S. Congress ranks among Minnesota’s most bizarre political odysseys. But little about Shoemaker surprised those following the meteoric career of the radical newspaper editor from Red Wing.

Francis Shoemaker was born in Renville County to Francis M. and Regina D. Shoemaker on April 25, 1889. He later claimed working as a “known speaker” by age fourteen and a labor organizer by age seventeen. He also alleged aiding the prominent, radical labor leader “Big Bill” Haywood. Yet even Shoemaker’s political allies didn’t trust his statements. Henry G. Teigan, a founding father of the Minnesota Farmer-Labor Party (F-L), said Shoemaker leaned toward “spilling fabrications instead of facts.”

In the early 1920s Shoemaker was active in the farmer labor group Progressive Farmers of America (PFA). A PFA official charged him with misuse of funds in 1926, resulting in Shoemaker’s expulsion and a serious rift within the group. In 1928 Fred A. Scherf, a Nonpartisan League activist and former state legislator, chose Shoemaker as editor of the Scherf-owned Red Wing newspaper the Organized Farmer.

Shoemaker used the newspaper to denounce the area’s dominant Republican party and its leaders. Three-term Republican Congressman August H. Andresen became a popular target of the feisty editor. Shoemaker hoped to replace Andresen in Congress. “Jellyfish,” “rodent,” and “Wall Street tool” were among the names given to the incumbent in the Organized Farmer. Shoemaker, the Farmer-Labor party candidate, ran for Andresen’s Third District seat in 1930. He proclaimed, “Vote for me in November and make it the last of August.” Shoemaker lost.

A bigger challenge now faced the editor. He had written a letter to a Red Wing banker addressed to “Robber of Widows and Orphans, Red Wing, Minn. in care of Temple of Greed and Chicanery.” Local postal workers took note. Shoemaker found himself charged with improper use of the mail. U.S. District Court judge John B. Sanborn Jr. heard his case in St. Paul and sentenced the newsman to a $500 fine. Sanborn added a year and a day in federal prison but suspended that term.

An angry Shoemaker struck back, using his newspaper to question Sanborn’s decision. The now-irate federal judge sent the editor to prison. Shoemaker spent nearly his full term in Leavenworth Penitentiary before being released on November 4, 1931.

America’s Great Depression deepened while Shoemaker served his time. He returned to the newspaper, ready for another run at Andresen. A talented and combative speaker, Shoemaker campaigned aggressively. He knocked out a Clarkfield heckler. A Twin Cities radio station forced him off the air. A Faribault jury, meanwhile, heard an Andresen slander lawsuit against Shoemaker. It took just twenty minutes to find him not guilty.

Shoemaker caught a break when political stalemate resulted in Minnesota’s 1932 race for Congress being run on an “at large” basis. The top nine vote-getters statewide were to be sent to Washington, D.C., and 1932 appeared to be a Farmer-Labor year in the state.

Backed by voters from Greater Minnesota, Shoemaker captured the eighth of nine seats. Andresen placed tenth. Once in Washington, Congressman Shoemaker did little lawmaking. But he did take revenge on his old Minnesota enemies—“ravenous fiends” and “alley rats”—in a June 9, 1933 speech, “My Judicial Crucifixion—How a Judicial Oligarchy Railroaded Me to a Penitentiary.”

During his term, Washington police twice arrested the erratic Shoemaker for assault. Minneapolis officers topped that total, jailing him three times—most notably for a high-speed chase down Hennepin Avenue and during the 1934 Minneapolis truckers’ strike.

Shoemaker overreached in March 1934 when he challenged Farmer-Labor Party leader Henrik Shipstead for his U.S. Senate seat. A bombastic Shoemaker speech nearly stampeded F-L convention-goers to his cause. Party regulars finally put down his mutiny.

Shoemaker ran for Congress four more times, but without success. In July 1934 he claimed he was going overseas as a foreign correspondent. A St. Paul Pioneer Press editorial noted archly, “Never have the citizens of the state more anxiously and passionately desired to believe the congressman’s word.”

Shoemaker later moved to Redwood Falls, where he was arrested for assault in 1938 and 1939. He died in Minneapolis in 1958.