Arts & Culture
MNopedia
This content is shared with MinnPost by MNopedia, the digital encyclopedia created by the Minnesota Historical Society and supported by the Legacy Amendment’s Arts and Cultural Heritage Fund.
Nov. 25, 2014 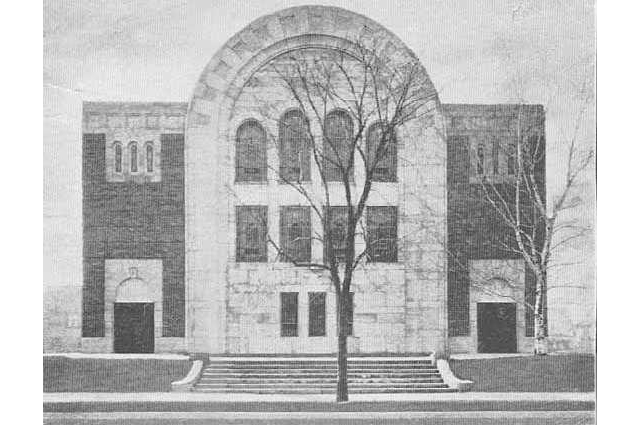 Founded in 1922, Beth El was the last synagogue to be formed on the North Side of Minneapolis. It was the only one to affiliate with Judaism’s Conservative movement. In the 1960s, Beth El, like other North Side synagogues (all of them Orthodox), moved to St. Louis Park.

The seeds of Beth El were planted as early as 1913. Young people at the leading North Side congregation, Kenesseth Israel, tried unsuccessfully to establish a modern worship service conducted in English. The generation gap between the immigrant, Orthodox parents and their children led to the formation of the Young People’s Synagogue in 1920.

These high school- and college-aged youth were alumni of the Talmud Torah (study of Torah), a community-wide religious school for children and adolescents. They conducted their own Sabbath-eve services at the Talmud Torah building at Eighth Street and Fremont Avenue North. These services were shorter and more decorous than those at the Orthodox synagogues on the North Side. Soon, some parents joined the young people, and Beth El (House of God) was born.

Within a year, the energetic group numbered close to 150 families. It soon outgrew the Talmud Torah facility. Beth El purchased a lot at Fourteenth Avenue and Penn Avenue North in 1922. This was in the Homewood neighborhood, west of the main North Side Jewish community. Rabbi David Aronson of Duluth was hired in 1924 to lead the congregation. He would remain for the next thirty-five years.

Worship services and activities were held in a small house on the site until a new synagogue could be built. Beth El hired the Minneapolis firm of Liebenberg and Kaplan to design its new building. Liebenberg was the first Jewish architect in Minnesota.

The clean, modern lines of the neoclassical building reflected the congregation’s forward-looking style of Judaism. It opened in 1926. Liebenberg and Kaplan also designed new Minneapolis synagogues around the same time for Temple Israel and Adath Jeshurun Congregation.

The Depression years were financially difficult for the young synagogue. Still, by 1948, Beth El membership had grown to about 450 families, making it the largest congregation on the North Side. Facilities expanded to accommodate many activities: religious education for all ages; clubs for men, women, and young married couples; and cultural events such as an annual interfaith Thanksgiving service and performances of Yiddish plays.

To counter the influence of an outside organization operating under his roof, Aronson created a synagogue-based youth group called United Synagogue Youth (USY). USY spread to other Conservative synagogues regionally, nationally, and, eventually, internationally. As of 2013, USY was still in existence. Aronson’s influence was so pervasive on the North Side that he was known, not always affectionately, as “the Pope of Penn Avenue.” He retired in 1959.

By the 1960s many of Beth El’s approximately nine hundred families had moved from the North Side to St. Louis Park. The congregation purchased land on West Twenty-Sixth Street (later renamed Barry Street), facing Highway 100. Beth El built its Youth and Activities Building there in 1963.

By 1967, only 10 percent of Beth El members still lived on the North Side. It was time to consolidate all activities in a new synagogue on the St. Louis Park site. Beth El held its last Sabbath service on Penn Avenue in June 1968. The building was later sold to the city of Minneapolis for use as Pilot City Health Services. It was razed in 1995.

Architect Bertram Bassuk designed Beth El’s new building, which was dedicated in 1970. The curved wooden roof over the sanctuary swoops skyward, evoking the Tent of Meeting, the portable sanctuary in which the ancient Israelites carried the Ark of the Covenant.

Beth El has never merged with another group or split apart into smaller groups — a rarity among Minneapolis-area synagogues. The thriving congregation numbered about 1,400 member families in 2008. A major expansion of its building, designed by Miller Dunwiddie Architecture, was completed in 2012.