Arts & Culture
MNopedia
This content is shared with MinnPost by MNopedia, the digital encyclopedia created by the Minnesota Historical Society and supported by the Legacy Amendment’s Arts and Cultural Heritage Fund.
Jan. 6, 2015 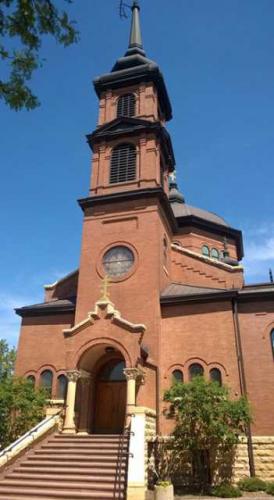 St. Mary’s Orthodox Cathedral was completed in 1906. It is the home church of a small community of Rusyns (also called Ruthenians or Carpatho-Ruthenians) who immigrated to Minneapolis from the Austro-Hungarian Empire in the late nineteenth century.

In 1877 Northeast Minneapolis began to attract immigrants from a small Central European ethnic group. They were called, variously, Rusyns, Ruthenians, and Carpatho-Ruthenians (since many lived in or near the Carpathian Mountains). Rusyns today live mostly in Slovakia, Hungary, Romania, and Ukraine. In the late nineteenth century they were subjects of the Austro-Hungarian Empire.

Rusyns belonged to the Eastern Rite Catholic tradition. They were part of the Roman Catholic Church, but only for political reasons rooted in the histories of their home countries. Rusyns considered themselves Orthodox—a tradition based in Constantinople rather than Rome. They did not use the Latin mass and their priests could marry.

Too few at first to support their own church, the religious among the Rusyns who came to the Twin Cities attended mass at a Polish Roman Catholic church in their Northeast Minneapolis neighborhood. They arranged occasional visits by Eastern Rite priests from Pennsylvania. By 1887 their numbers had grown to about eighty. In that year, a group organized to form and build a church. St. Mary’s Greek Catholic Church, a small frame building, opened in 1888 at the corner of Fifth Street Northeast and Seventeenth Avenue Northeast.

In 1889 St. Mary’s first resident priest, a widower named Alexis Toth, arrived from Austria-Hungary. He held his first services—not in Latin but in Church Slavonik—on Thanksgiving Day. A few weeks later, on December 19, Toth went to St. Paul to present his credentials to John Ireland, the Roman Catholic Archbishop of St. Paul and Minneapolis.

The meeting did not go well. Upon learning that Toth had been married, Ireland rejected his credentials and denied him the authority to act as a Catholic priest. Ireland forbade use of the Eastern Rite liturgy and directed the Rusyns to worship at the Polish Catholic Church.

With the support of the St. Mary’s congregation, Toth ignored Ireland. He took up the position of parish priest, supporting himself by running a grocery. At the same time, he and his parishioners looked for a solution to their differences with Ireland.

The original frame church burned in 1904. Most of the sacred decorations, imported from Europe, were lost in the fire. To rebuild, the congregation hired Minneapolis architect Victor Cordella to design something grander and more durable. Construction began in 1905.

Cordella reportedly based his design on the Saint Nicholas Cathedral in Omsk, Siberia. St. Mary’s does resemble it. Both have a portico with a steeple and bell tower in front and a tall dome rising behind it over the sanctuary. The base of the St. Nicholas dome, however, is circular, while St. Mary’s is hexagonal.

When the cathedral opened in 1906 its congregation had nearly nine hundred members. Still, the building’s $40,000 cost drained the church’s resources. Despite an annual subsidy of $1100 from the Russian government and a $1029 gift from Czar Nicholas II, the cathedral opened without furnishings, decoration, or central heating. Those arrived as money permitted. Pews were installed in 1934.

The decorations added over the years include a white icon screen at the front of the sanctuary, a large chandelier, a painted dome, and stained glass. There are also icon-style paintings—some life size—of Jesus, Mary, and Orthodox saints. A 1982 redecoration restored the building’s vibrant appearance for the twenty-first century.

St. Mary’s Orthodox Cathedral in Minneapolis was Catholic until Archbishop Ireland stepped in