Arts & Culture
MNopedia
This content is shared with MinnPost by MNopedia, the digital encyclopedia created by the Minnesota Historical Society and supported by the Legacy Amendment's Arts and Cultural Heritage Fund.
Feb. 24, 2015 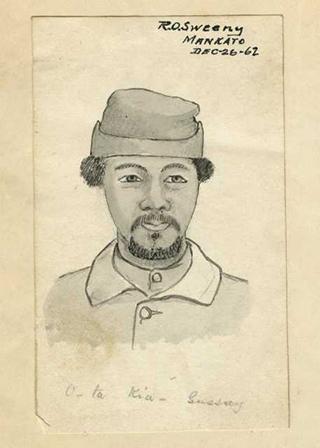 Courtesy of the Minnesota Historical Society
Hand-drawn image of Godfrey by Robert O. Sweeny
from the time of the trials in 1862.

The U.S.–Dakota War of 1862 was a turning point in Minnesota history. Joseph Godfrey, an escaped slave, joined the Dakota in their fight against white settlers that summer and fall. He was one of only two African Americans to do so.

Joseph Godfrey was born a slave around 1830 in Mendota. He was the son of a French Canadian voyageur named Joseph Godefroi and Courtney (sometimes known as Polly), a female slave brought to Fort Snelling by an American army officer and later sold to Alexis Bailly. Godfrey spent his first few years in the Bailly household with his mother. Not much is known about his childhood except that he received little to no education. As he grew older, Godfrey was hired out to serve as an aide for Henry H. Sibley, a prominent trader (and later the first governor of Minnesota) who played a key role in the U.S.–Dakota War.

Having suffered ill treatment from his owners, Godfrey ran away to seek refuge among the Dakota as a fugitive slave. He later moved with them to the Lower Sioux Agency, where he married the daughter of Wahpaduta (Red Leaf) in 1857. In August 1862, while helping local Dakota load hay onto a wagon, Godfrey was approached by a Dakota man who announced that all the white people had been killed at the agency. On the spot, Godfrey was asked what side he would take. Afraid for his life and family, Godfrey felt compelled to join the war.

Later that fall, Godfrey was accused by Sibley of joining the Dakota between August 18 and September 26, 1862, and actively participating in attacks. Dakota warriors awarded him the name “Atokte,” meaning “slayer of many” in Dakota. Godfrey denied he had killed anyone. However, there were conflicting reports about his role in the conflict and how active he really was.

Godfrey surrendered along with a group of about one thousand Dakota on September 26, after the September 23 Battle of Wood Lake. He was the first person tried by the military commission on September 28, 1862. In an effort to escape execution, Godfrey testified against eleven of the thirty-eight Dakota warriors who were eventually hanged on December 26, 1862. Although he was not convicted of murder, he was convicted of participating in the fighting and sentenced to death by hanging. In exchange for Godfrey’s testimony, the commission recommended that President Lincoln commute his sentence to ten years imprisonment. In its recommendation to Lincoln, the court commission stated that “a large number of men of the very worst character would have gone unpunished” without Godfrey’s testimony. Lincoln agreed to the commutation and later issued a full pardon.

Godfrey was sent to Camp McClellan in Davenport, Iowa, to serve his prison sentence. After serving three years, he was pardoned and freed in 1866. Upon his release, he settled on the Santee Reservation in Nebraska.

Godfrey spent the rest of his life on the Santee Reservation, where he passed away from natural causes in July 1909. Godfrey’s body was buried at the Episcopalian Cemetery on the reservation.

Sherick Francois is currently enrolled at Gustavus Adolphus College pursuing a major in African American History along with a double minor in African and Peace Studies.

Caught between two worlds: Joseph Godfrey and the U.S.–Dakota War of 1862