Arts & Culture
MNopedia
This content is shared with MinnPost by MNopedia, the digital encyclopedia created by the Minnesota Historical Society and supported by the Legacy Amendment’s Arts and Cultural Heritage Fund.
Feb. 10, 2015 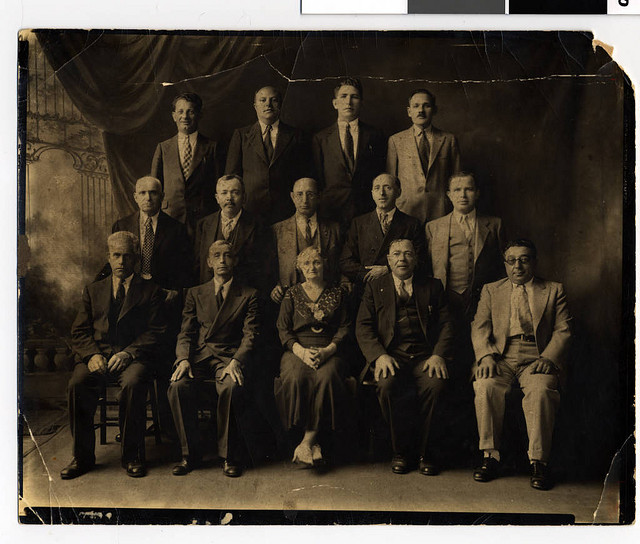 CC/Flickr/Jewish Historical Society of the Upper Midwest
Members of the Workman’s Circle at the Labor Lyceum on the North Side, Minneapolis, 1919.

A small, committed group of Jewish immigrants raised the funds needed to build the Labor Lyceum at 1426 Sixth Avenue North in Minneapolis in 1915. The two-story brick and stucco building was a hub for radical Jewish cultural, political, and social activities for the next thirty-five years.

The first Eastern European Jewish immigrants to Minnesota were working-class wage earners. In 1912, more than half were factory workers. Most followed traditional religious ways, but a minority were secular and radical. These Jews felt socialism was the means to create a just and equal society. They also wished to maintain a vibrant Jewish cultural life. Speaking Yiddish was a central part of their identity.

Years later, one Jewish man recalled his experience arriving in Minneapolis as an immigrant in 1906. He found hundreds of other young men and women like himself, secular Yiddish speakers, “imbued with the spirit of socialism.” They put on Yiddish plays at the Finnish Hall on Glenwood Avenue and started a Yiddish library in 1907. The library was in Kistler’s Hall at Sixth Street and Lyndale Avenue North in the heart of the North Side neighborhood.

Local branches of a national group, the Workmen’s Circle (also known by its Yiddish name, Arbeiter Ring), became a primary focus of such socialist activity. The group was founded in 1900 in New York. It was (and remains, in 2015) dedicated to Yiddish culture, trade unionism, and mutual aid. Chapters of the Workmen’s Circle formed in Minneapolis, St. Paul, and Duluth in 1910 and 1911.

When the Workmen’s Circle raised the $35,000 needed to build the Labor Lyceum from allies around the state, it was at the height of its influence. The building had facilities to hold mass meetings and social events. Many groups rented space in the building. The rents provided a major source of the Workmen’s Circle budget.

From 1915 to 1920, the Labor Lyceum maintained a Yiddish school for children. Sixty children were enrolled at its peak. A second attempt to establish a Yiddish school in 1936 began with forty-five children. Enrollment dropped by half within a few years. Most North Side immigrants and their children wanted to speak English, not Yiddish, in their daily lives.

A 1936 Jewish communal survey reported that membership of all organizations that used the Labor Lyceum as their headquarters was close to 1,200. The three Workmen’s Circle branches had about 150 total members. The Jewish population of Minneapolis at the time numbered between sixteen thousand and twenty thousand.

Power struggles in the Soviet Union in the 1920s and 1930s split the Workmen’s Circle into two camps. The socialists believed in change through established institutions. Others believed in the Soviet brand of communism under Joseph Stalin. Long-standing friendships were tested. Shouting matches and character attacks broke out in the halls of the Labor Lyceum. The arguments led to a 1937 split in the Duluth Workmen’s Circle chapter; the two branches reunited in 1960.

In 1938, the Labor Lyceum building was among those moved when Sixth Avenue North was expanded to create Floyd B. Olson Memorial Highway. The building’s new address was 1800 Olson Highway, about four blocks west of its original location.

The Labor Lyceum celebrated its twenty-fifth anniversary in 1940. Membership in the three Workmen’s Circle chapters totaled 129. The Ladies’ Auxiliary had about thirty-five members. National membership was about seventy-five thousand. Minneapolis mayor Hubert Humphrey was the keynote speaker for the Lyceum’s thirtieth anniversary celebration in 1945.

In 1953, the Workmen’s Circle moved to a new, smaller building at 2418 Plymouth Avenue. In 1966, the “Workmen’s Circle Center Hall” moved a few doors down the street to 2428 Plymouth. It remained there for three years. After that, it disappeared from the city directory.

In industrial Duluth, Workmen’s Circle membership reached a peak of about three hundred in the 1930s. In 1961, the group celebrated its fiftieth anniversary. The Northern District of the national Workmen’s Circle held its annual conference in Duluth that year in their honor. The Duluth chapter had sixteen members in 1985.

Several factors led to the demise of the Workmen’s Circle in Minnesota. These included the end of unrestricted immigration to the U.S. in 1924, the decline of the Jewish garment industry in Minneapolis, and the movement of the Jewish community into the middle class after World War II.

Labor Lyceum was center for Yiddish, socialist culture in Minneapolis