Arts & Culture
MNopedia
This content is shared with MinnPost by MNopedia, the digital encyclopedia created by the Minnesota Historical Society and supported by the Legacy Amendment’s Arts and Cultural Heritage Fund.
March 31, 2015 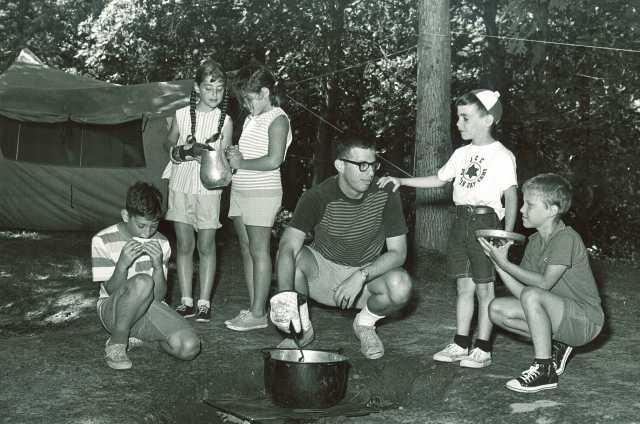 Organized youth camping became popular in the late nineteenth century against the backdrop of the Progressive Era. In Minnesota and across the United States, reformers believed that offering fresh-air vacations to poor children living in crowded cities would contribute to public health. Another motive was Americanizing the children of immigrants. The earliest Jewish camps pursued the same goals, with one addition: teaching the Jewish faith.

The Jewish Working Girls Vacation Society in New York founded the first Jewish camp in the United States in 1893. Minnesota was the home of the first kosher camp in the Northwest, the Lake Rest Vacation Home. It was established in 1911 at White Bear Lake for the “benefit of overtired mothers and their children.” The camp was soon renamed Sophie Wirth Camp. Wirth was the leader of the camp’s founding organizations, the Jewish Relief Society (an auxiliary of Mount Zion Temple) and the St. Paul chapter of the National Council of Jewish Women (NCJW).

Sophie Wirth Camp’s capacity in 1926 was ninety campers. The staff numbered twenty-five. Providing good nutrition to the campers, many of whom were underweight, was crucial. Two-week sessions for older children alternated with sessions for mothers with small children. One former camper recalled, “The staff and Council of Jewish Women were all for education, developing good health habits, even for Americanization, but the kids were there to have fun.”

By the 1920s, children of the immigrant generation were drifting away from their parents’ Old World religious observance. Zionism became a mass movement among American Jews. Racial tensions, fear of immigrants, and anti-Semitism increased across the U.S.

Hundreds of Jewish camps sprung up in the U.S. between the 1920s and 1950s, an era called the “heyday” of Jewish camping. A few were located in Minnesota and Wisconsin. Some camps had a religious focus, while others had Zionist, Hebrew, or socialist missions. All included American-style camping and outdoor activities.

Minneapolis’s Council Camp, later known as Camp Tikvah, illustrates the evolution of Jewish camping philosophy. In 1930, Sam Finklestein, youth director at South Side Neighborhood House in Minneapolis, secured a “mosquito and weed-infested” campsite near Tonka Bay. He aimed to provide an outdoor experience that would physically and emotionally benefit children of the settlement house, which was sponsored by the Minneapolis chapter of the NCJW.

In 1937 Finklestein learned of an opportunity to lease a better campsite in Hinckley for one dollar a year. It was one of a series of campsites built nationwide by the New Deal. The Jewish camping program got permission to use the Hinckley site on the condition that one-third of campers be “low-income.” The camp was nonsectarian but based on Jewish principles. For instance, Friday night Shabbat services were held weekly.

The federal government withdrew the camp’s lease in 1947. By then, Council Camp had become a fixture of the Jewish community. A group led by Finklestein looked for a permanent location. They found a former resort located on three hundred acres near Aitken.

The Minneapolis Jewish Federation created the Jewish Camping Association and purchased the site. The camp was renamed Camp Tikvah (Hope). The Emanuel Cohen Center (soon to become the Jewish Community Center of Minneapolis) took over operations in the late 1950s. Camp Tikvah closed in 1983.

More overnight camps for the Jewish youth of Minnesota and the Upper Midwest arose in the 1940s and 1950s. First came Herzl Camp, in 1946. The independent Zionist camp was founded by a group of fifteen to twenty Jews from the Twin Cities led by Harry Rosenthal. Herzl Camp initially used the old Sophie Wirth Camp in White Bear Lake, which had closed in 1943.

In its first year, Herzl Camp used a merit-based application process to select sixty campers. Criteria included personality, Jewish background, leadership potential, and interests. The process was similar to that used by East Coast camps, including one Rosenthal’s daughter had attended. The process was soon abandoned. About one thousand campers attended Herzl Camp in its first four years.

When the White Bear Lake camp property was sold to developers, Herzl Camp purchased sixty acres on Devil’s Lake in Webster, Wisconsin, in 1947. A 1948 article in the American Jewish World praised the camp’s impact on children from “scores of small Jewish communities of the Northwest” where they were “bereft of almost all inspiring Jewish influences.” By 2012, Herzl claimed some 30,000 alumni, many second- and third-generation, from all over the U.S. During most years in the 2010s, virtually all the counselors are camp alumni.

The St. Paul Jewish Community Center created an overnight camp in 1957. Previous efforts at day camping at Como Park and Lake Phalen proved “unsatisfying.” An earlier attempt to make arrangements with Council Camp did not succeed. For three or four years in the early 1950s, the St. Paul Jewish Community Center (JCC) used a New Deal-built camp near New Ulm for overnight camping.

In 1957, Rose Butwin, the widow of local clothing manufacturer Jack Butwin, donated funds to the St. Paul JCC to purchase land on Lake O’Brien in Eagan. Camp Butwin, for children in grades K-9, was dedicated in June 1958. By 2013, it had expanded to encompass eighty-eight acres and added a retreat center with kosher facilities.

Camps sponsored by Jewish community centers and the Conservative and Reform denominations developed after World War II. These camps added a new goal: cultivating leaders for Jewish organizations. The first of the denomination-sponsored camps were established in Wisconsin. This made them accessible to Minnesota youth.

The Conservative movement’s Camp Ramah was founded in 1947 in Conover, near the border with Michigan’s Upper Peninsula. Olin-Sang-Ruby Union Institute (OSRUI) camp in Oconomowoc was the Reform movement’s first summer camp, founded in 1952.

The popularity of Herzl Camp, Camp Ramah, and OSRUI undoubtedly contributed to Camp Tikvah’s closing in 1983. The Aitken property was sold to a developer. Meanwhile, local synagogues provided day camps for younger children. The best known is Camp TEKO, sponsored by Temple Israel in Minneapolis. Located west of the city at Long Lake, Camp TEKO dates to about 1970. It also offers overnight camping for children in grades three to six.

In the 2010s, about seventy thousand children nationwide attend Jewish overnight camp each year. Studies consistently show the positive, long-term impact of the Jewish camping experience on Jewish identity and affiliation. Those who have attended Jewish camps are more likely to donate to a Jewish charity, feel attached to Israel, and report that being Jewish is important to them than those who have not attended camp.

The 2014 edition of the American Jewish World’s annual community guide listed eighteen Jewish camps in Minnesota and Wisconsin. They included overnight programs as well as day camps sponsored by synagogues and religious schools — some Orthodox and Hasidic.