Arts & Culture
MNopedia
This content is shared with MinnPost by MNopedia, the digital encyclopedia created by the Minnesota Historical Society and supported by the Legacy Amendment’s Arts and Cultural Heritage Fund.
March 10, 2015 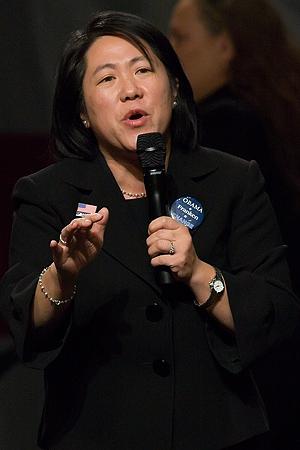 CC/Wikimedia/Calebrw
Minnesota state senator Mee Moua speaks at a rally on
October 30, 2008, in support of Barack Obama, Al
Franken, and other Democratic candidates.

In a special state Senate election held in January of 2002, Mee Moua became the first Asian woman chosen to serve in the Minnesota Legislature and the first Hmong American elected to any state legislature. Her win in St. Paul’s District 67 made national news and had lasting political and cultural impacts on the Hmong community.

Randy Kelly’s successful run for St. Paul mayor in November 2001 left a Senate seat open in District 67. The ethnically diverse East Side district had a history of supporting the Democratic–Farmer–Labor party (DFL). A DFL convention was scheduled for January 15, 2002, and a special election for January 29, 2002.

The five DFL candidates vying for the seat had less than two months to organize their campaigns. Tim Mahoney, a state representative and party favorite, was endorsed by Kelly. Most analysts predicted that he would win the primary.

Moua, a St. Paul lawyer, announced her intention to run in late November. With about a month remaining before the primary, Moua needed to mount an aggressive and expansive campaign that would garner her support as a first-time candidate.

Moua stood out from the field because of her refugee background. Born in Laos in 1969, she moved to the U.S. with her family in 1978 after the Vietnam War. She grew up in Wisconsin, where she experienced poverty and discrimination living in a mostly white neighborhood.

While attending Brown University, Moua became a passionate activist on campus, which led her to pursue a political career. She earned a master’s degree in public policy at the University of Texas in 1995 and a law degree from the University of Minnesota in 1997. Prior to her run for Senate, Moua worked as an attorney and a community organizer in St. Paul.

Moua’s 2002 campaign platform focused on education, housing, the economy, and public safety. With her background and experience, she wanted to reach out to the most marginalized people in her precinct. Disadvantaged groups, she reasoned, were often the most distant from politics. First-time and nontraditional voters, most of whom were low-income and recent immigrants, became the targets of her outreach.

Even as a novice candidate, Moua knew firsthand how to run an effective campaign. In 1995 she had helped run her uncle Neal Thao’s successful bid for St. Paul School Board. As her 2002 race progressed, mentors like Senator Paul Wellstone offered key advice.

At first, Hmong clan leaders hesitated to endorse Moua. Many were new to U.S. politics and unsure of her prospects. Eventually, however, they came together to support her. Moua also received strong backing from Progressive Minnesota. The political group focused on community organizing, citizen education, student advocacy, and feminist issues.

With just weeks left before the DFL convention, young Hmong professionals contributed by serving as volunteers and campaign staff. They used their connections to build a strong voter base and reach out to residents in East Side St. Paul. By connecting with Hmong real estate agents, Moua’s staff was able to get valuable information on Hmong home ownership in District 67.

In just two months, Moua’s 250 volunteers visited every one of the twenty-seven thousand households in the district three times. Through canvassing, they were able to register over five hundred first-time voters. At least three hundred of them were Hmong.

On January 15, the day of the primary, Moua’s volunteers and staff provided Hmong translators. They also offered transportation to and from polling places. Although no candidate received the DFL’s endorsement, Moua obtained 1,751 votes (44.01%)—170 more than Mahoney.

On January 29, the day of the special general election, Moua was elected by a margin of more than one thousand votes. She received a total of 3,055 (51.19%). Her Republican opponent, Greg Copeland, received 1,738. Independence Party candidate Jack Tomczak won 1,055.

Moua’s victory broke barriers for Hmong women living within a patriarchal culture. It also signaled a change in mentality about their political participation. By winning the Senate seat, Moua increased the visibility of Hmong women and of Hmong people throughout Minnesota.

Tiffany Vang writes for the Minnesota Women’s Press, Hmong Today, and Twin Cities Daily Planet. She also writes for Matador Network, where she blogs about traveling, human rights, and culture.