Arts & Culture
MNopedia
This content is shared with MinnPost by MNopedia, the digital encyclopedia created by the Minnesota Historical Society and supported by the Legacy Amendment's Arts and Cultural Heritage Fund.
April 14, 2015 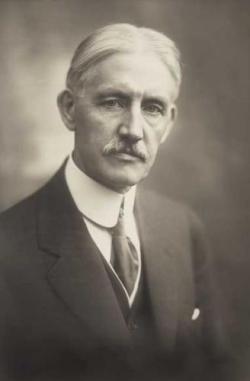 Though he died in 1936, Johnston remains the most abundantly and persistently present of all Minnesota architects. He is best known for his houses, but his career had another dimension. In his long tenure as state architect and in commissions for institutional clients, he designed for multitudes. Johnston’s works have touched the full spectrum of Minnesotans and continue to do so in the twenty-first century.

Johnston was born in Elysian, Waseca County, in 1859. His parents, Alexander and Louise Buckhout Johnston, were originally from New York state. At age fifteen Johnston went to work for St. Paul architect Abraham Radcliffe. He studied architecture at MIT—the only formal training he ever received—but left after one term due to a lack of money. He then worked briefly for architects in St. Paul and New York, where he lived with Cass Gilbert. In 1882 he settled into his own practice in St. Paul.

Even at the start of his career Johnston knew how to think big. His first commission, at age twenty-four, was for future governor William Merriam’s mansion overlooking downtown St. Paul. He designed Glensheen—thirty-nine rooms and fifteen baths on seven acres overlooking Lake Superior. The house, finished in 1904, became one of Duluth’s main tourist attractions.

Stonebridge (built in 1914, razed in 1953) stood near the Mississippi a mile south of the foot of Summit Avenue in St. Paul. Smaller than Glensheen, with nineteen rooms, it had classical touches— six enormous columns at the main entrance—and conspicuous modernities, such as a heated garage with maintenance pits. The landscaped, forty-acre campus made it the biggest estate in St. Paul. 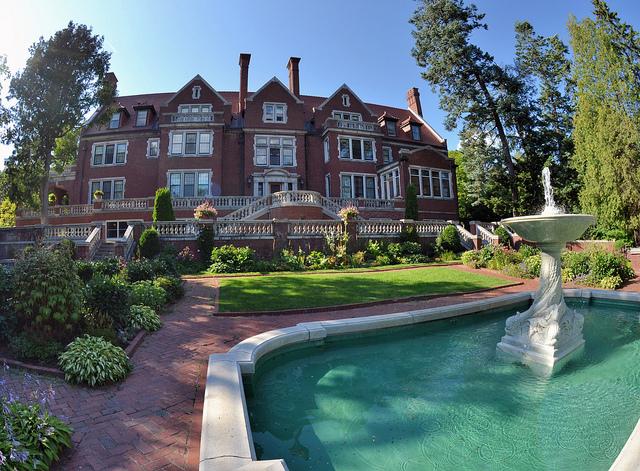 None of Johnston’s other houses approached these in scope. But he designed many, mostly in St. Paul’s wealthy neighborhoods and along Summit Avenue. There was no such thing, however, as a Clarence Johnston style; he composed in great variety.

From 1901 to 1931 Johnston served as Minnesota State Architect while continuing his private practice. In this role Johnston designed public buildings for many people: employees, residents, guests, and managers—rather than private homes intended to please single clients.

Johnston’s institutional creations supported diverse arenas of public life, including sports (the St. Paul Curling Club, 1913); health care (the Ah-Gwah-Ching Center, 1907); politics (the State Office Building, 1932); and farming (the State Fair Cattle Pavilion, 1920). The Crispus Attucks Home (1883) is a Johnston design, as is the Salvation Army Home for Girls (1913) and the Jewish Home for the Aged (1920), later known as Sholom Home.

Johnston’s other works include the 1905 incarnation of Stillwater State Prison; two state reformatories; twenty-two churches; six public schools; and more than twenty buildings for the University of Minnesota, among them Williams Arena, Walter Library, and Northrop Auditorium. Even this list falls short of portraying the whole. Paul Clifford Larson, Johnston’s biographer, believed his own fourteen-page catalog of Johnston’s works to be incomplete.

Johnston slowed down in the early 1930s and died in 1936. His son, Clarence Johnston, Jr., also had a notable career as an architect.