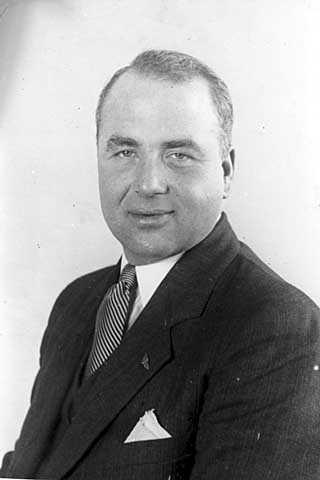 Courtesy of the Minnesota Historical Society
Melvin Maas in 1931

Though he lived in a Democratic city and a Democratic political era—the Great Depression and World War II—the conservative Republican Melvin Maas represented St. Paul in Congress from 1927 to 1945, with one short interruption. He also received two World War II combat decorations, was awarded a Carnegie Hero Fund medal, and served the public for two decades after leaving politics.

When the U.S. entered World War I, nineteen-year-old Duluth native Melvin J. Maas joined the Marines, learned to fly, and flew reconnaissance missions over the Atlantic. In St. Paul after the war he joined one of his brothers in the insurance and bonding business.

Maas first ran for Congress in 1926 on an anti-Prohibition platform. In the Republican primary that year he defeated incumbent Oscar Keller, then won the general election easily. When he entered Congress in March 1927 he became its youngest member at age twenty-eight.

Maas won re-election in the Herbert Hoover Republican landslide of 1928. Then, however, the world changed. The stock market crash of 1929 and the Depression that followed threw scores of Republicans out of Congress and nearly crushed the party. While Maas prospered in the 1930 election, winning with his biggest majority ever (66% of the vote), harder times awaited him.

Maas lost his seat in 1932. Minnesota’s failure to redistrict after the 1930 census led to a statewide, at-large primary. Only nine candidates could go on to the general election; Maas did not make the cut. One of his final acts in that Congressional session was to talk an unbalanced young man in the House gallery into dropping—into Maas’s waiting hands—the loaded pistol he had been waving. For this, Maas received a Carnegie Hero Fund Commission award and medal.

By 1934, when Maas presented himself as a candidate for Congress once again, Congressional Republicans had been reduced to just over one hundred, and St. Paul loved the arch-Democrat Franklin Roosevelt. Maas still won, though not by much. He received only 36% of the vote, but his two main opponents split the vote against him. In 1936 Roosevelt won every ward in St. Paul, and handily. Maas won just three wards of twelve but was sent back to Congress by a margin of 360 votes—thanks once again to the divided Farmer-Labor and Democratic opposition.

In Congress Maas had always focused on military issues, advocating especially for a bigger Navy. The threat and later the onset of World War II vindicated his position and may have helped him at home. He won easily in 1938, 1940, and 1942.

In Congress and out, Maas kept his Marine officer commission and his pilot’s license. He flew all over the country. After war with Japan began, he flew in the South Pacific. He volunteered for combat in the summer of 1942 and won a Silver Star for action over New Guinea.

This did not help him in politics. He lost in 1944 when the Democrats and Farmer-Laborites united behind a single candidate, Frank Starkey. Though only forty-six at the time, Maas never ran for office again. He returned to active Marine duty in 1945 as an airbase commander on Okinawa. While there, he suffered shrapnel wounds to the face and won another combat medal, the Legion of Merit.

After the war, having been promoted to general, Maas stayed on active military duty. In 1949 President Truman appointed him to the President’s Committee on the Employment of the Handicapped. The appointment proved prophetic. Over the course of a few weeks in August 1951 Maas lost his eyesight—a delayed response to his injuries on Okinawa.

In 1954 President Eisenhower appointed Maas chairman of the Committee on Employment of the Handicapped. For his energetic work there he won many certificates and commendations, including the Migel Medal, the highest award of the American Foundation for the Blind, presented to him by Helen Keller. In 1955 he was elected national commander of the Disabled American Veterans.

Maas died in April 1964 of heart disease and diabetes.