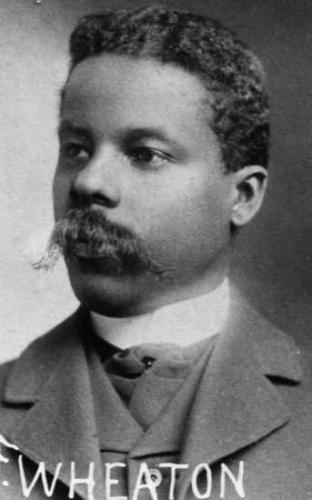 John Francis (J. Frank) Wheaton, a Twin Cities lawyer and orator, became the first African American elected to serve in the Minnesota legislature in 1898. A target of racial prejudice throughout his life, Wheaton believed in the political process as a means to improve the state’s civil rights laws.

Wheaton was born on May 8, 1866, in Hagerstown, Maryland, to Jacob Francis and Emily Green Wheaton. He valued education and worked hard to attain it. At Storer College in Harper’s Ferry, Virginia, he earned a teaching degree and taught school while studying law. Later, he took a summer business course at Dixon Business College in Illinois. In 1892, he obtained a law degree from Howard University Law School in Washington, DC. After months of struggle against discriminatory practices, Wheaton was admitted to the Maryland Bar and permitted to practice law.

Wheaton’s strong interest in politics was perhaps inspired by his father, who claimed to be the first African American to cast a vote in Maryland after blacks achieved suffrage in 1879. Young Wheaton was named a delegate to the Maryland Republican State Convention three times, in 1887, 1889, and 1891. He campaigned for presidential candidate Benjamin Harrison in 1888, giving speeches at local meetings. That year, at age twenty-two, he was chosen as an alternate delegate to the Republican National Convention in Chicago.

Wheaton moved to Minnesota in 1893. He put himself through the University of Minnesota’s law school by working as a hotel waiter and railroad porter. In 1894, he received his degree. He was the first African American to graduate from the law school and only the fourth to earn a degree from the University.

Wheaton’s political career quickly advanced in Minnesota. He began work in the law office of Judge William A. Kerr in 1894. The judge helped the young lawyer obtain a position in 1895 as assistant file clerk for the Minnesota House of Representatives. There, Wheaton earned a salary of five dollars per day. Judge Kerr would later appoint him as second deputy clerk for the Minneapolis municipal court in 1897.

Despite his good education and respected standing in the community, Wheaton continued to encounter prejudice based on his race. In 1895, he went to lunch at the Creamery restaurant in Minneapolis with fellow attorney D.M. Scribner and State Representative George F. Wright. After Wheaton was refused service, all three men left the restaurant in protest. Wheaton filed suit against the owner for discrimination.

In 1897, Wheaton once again came face-to-face with racial prejudice. While eating at St. Paul’s Metropolitan Hotel with a friend, he was accused of stealing the wallet of a prominent white man. Wheaton and his companion were taken to a nearby police station. The accuser dropped the charges and they were not searched. Outraged, Wheaton filed suit against the man for twenty thousand dollars in damages from false arrest and imprisonment. No record has been found of the results of either lawsuit.

These events may have inspired Wheaton’s decision to run for public office in 1898. He ran on the Republican ticket to represent the Kenwood district of Minneapolis. The district had an estimated nine thousand eligible voters, fewer than fifty of whom were black. Some voters in the district expressed prejudicial concerns about a black candidate, but Wheaton won the election. He became the first African American to serve in the Minnesota legislature.

Representative Wheaton introduced fifteen bills during his one term in office (1899). Chief among them was an amendment to an 1885 civil rights bill that prevented businesses from refusing service to anyone on the basis of race or color. Wheaton proposed an addition that made the list of pertinent businesses exhaustive. The bill passed both the House and Senate and was signed into law byGovernor John Lind on March 6, 1899.

Wheaton did not run for re-election in 1900. Instead, he went to Chicago to help establish the United Brotherhood, an insurance company open to people of all races. He returned to Minnesota briefly before moving to New York City in 1902. There, he continued his career in law and public service.