Arts & Culture
MNopedia
This content is shared with MinnPost by MNopedia, the digital encyclopedia created by the Minnesota Historical Society and supported by the Legacy Amendment’s Arts and Cultural Heritage Fund.
June 30, 2015 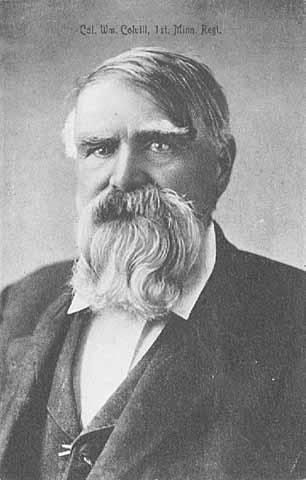 Courtesy of the Minnesota Historical Society
William Colvill, around 1890

The fate of the Union army hung in the balance on the second day of the Battle of Gettysburg in 1863. Confederate soldiers punched a hole in its defenses and only the men of the First Minnesota Infantry, led by Colonel William Colvill, stood in their way.

New York-born and educated, William Colvill came to Red Wing, Minnesota Territory, in 1854 to practice law. The twenty-four year-old attorney was a husky six-foot-five, quite large by mid-nineteenth-century standards. The Territorial Council chose him as secretary in 1856. He also established in the Red Wing Sentinel, a newspaper that backed the Democratic Party.

In April 1861, forces of the newly created Confederate States of America fired on Fort Sumter in Charleston, South Carolina. President Lincoln called for volunteers to support the Union. In Red Wing, William Colvill raced Hamline College student Edward Welch to be the first to sign enlistment papers in the Goodhue County unit.

Colvill’s fellow soldiers elected him captain of the 100-soldier Company F. The company boarded a steamboat to Fort Snelling on April 27, 1861. There, they joined with other units from around the state to become the First Minnesota Volunteer Infantry Regiment.

With Colvill at their head, Company F took part in the bloody campaigns of 1862. The unit’s historian reported their captain faced enemy fire bravely. Colvill and his men were severely tested. At Bull Run, the First Minnesota had forty-two killed and 108 wounded, with thirty missing.

On June 30, 1862, Captain Colvill took a bullet in the chest two inches below the collarbone. The Union Army was in retreat, and the seriously wounded Minnesotan was to be left behind, where he likely would have been captured. Colvill refused. Instead, he told the men nearby not to mention his injury. Then he walked to a field hospital, gripping a horse for assistance.

Captain Colvill, now recovered enough from his wound to resume command, returned to Company F at the end of August. By year’s end, he held the rank of lieutenant colonel and was the regimental second in command. In early summer 1863, William Colvill, now a full colonel, commanded the First Minnesota as it approached Gettysburg, Pennsylvania.

As sundown approached on July 2, day two of the fiercely fought Battle of Gettysburg, the Minnesota regiment waited in reserve. A strong Confederate assault broke apart the Union Army’s Third Corps. General Winfield Scott Hancock, in charge of the army’s entire center and left wing, fed several regiments into the fray, but the Southerners kept coming. Hancock discovered he had only one regiment remaining, the First Minnesota.

The general ordered Colvill and his men to make what most witnesses, Hancock included, believed to be a suicidal attack. Bayonets fixed, the 262-man regiment trotted down a slope toward a brigade of nearly 1600 Alabamians, picking up speed as they neared the enemy.

Colvill roared an order to open fire. The volley from his men halted the Confederates. The Southerners regained their balance and poured fire into the First Regiment. After the battle, the Minnesotans pulled back and reformed. Only forty-seven men were present. Colvill, shot twice, was not among them. The unit’s casualty rate was among the highest in a single engagement of any Union regiment in the Civil War.

Colvill survived his dangerous wounds, but the effects of his injuries would last his lifetime. Nevertheless, he accepted command of a Minnesota artillery unit during the final month of the war. He returned to Red Wing following the war’s end and resumed work as a lawyer. As a famed hero, he won election to the Minnesota House of Representatives in 1865 and was named state attorney general a year later.

In 1867, the thirty-seven year old Colvill married Elizabeth Morgan, a well-born New Yorker of some wealth. The marriage helped improve his worrisome financial situation. President Cleveland appointed Colvill federal registrar of the United States Land Office in Duluth in 1887. When Elizabeth died in 1894, Colvill moved to a Lake Superior homestead near Grand Marais. The colonel returned to Red Wing in 1900.

William Colvill died on June 13, 1905, just before a scheduled reunion with the First Minnesota. His body lay in state in Minnesota’s new capitol building.