Arts & Culture
MNopedia
This content is shared with MinnPost by MNopedia, the digital encyclopedia created by the Minnesota Historical Society and supported by the Legacy Amendment’s Arts and Cultural Heritage Fund.
July 21, 2015 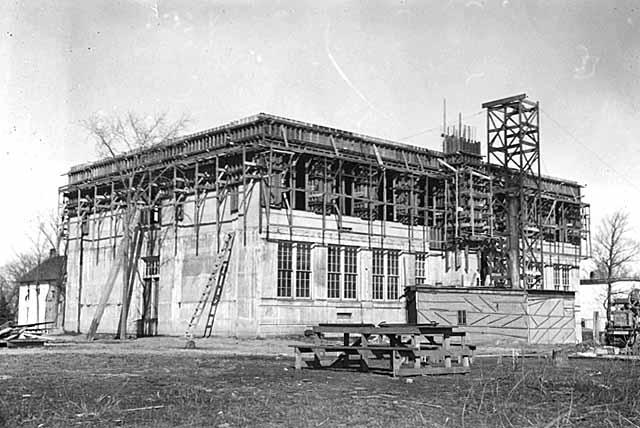 Courtesy of the Minnesota Historical Society
The Works Progress Administration (WPA) built Hanley Falls School between June 1938 and November 1939. By 1978, neighboring Granite Falls had absorbed all of Hanley Falls’ students and the building was ready for a new use.

When Hanley Falls School closed in the late 1970s, a few local residents saw an opportunity. Committed to sharing the history of their community, they transformed the white, two-story building on the town square into the Minnesota Machinery Museum. Since 1980, the museum has collected vintage farm equipment and created exhibits celebrating the history and agricultural tradition of Yellow Medicine County.

In the summer of 1976, Hanley Falls residents Lowell Gustafson and Galen Redetzke had an idea. To celebrate the town’s history, they planned to show old-fashioned, steam-powered farm equipment in action during the U.S. Bicentennial celebration. Their threshing spectacle was a hit. Locals and visitors began gathering in Hanley Falls every summer for the event, later called the Good Old Days Threshing Show.

While the show was still in its early years, Gustafson, Redetzke, and others decided to turn the nearly obsolete Hanley Falls School into a museum for farm machinery. By 1978, neighboring Granite Falls had absorbed all of Hanley Falls’ students. Hanley Falls no longer needed its New Deal-era school. Locals thought it would be perfect for displaying antique farm implements year-round—not just during the Threshing Show.

The Works Progress Administration (WPA) built Hanley Falls School between June 1938 and November 1939. The WPA employed 108 men, including some locals, and paid workers between sixty-five and seventy-five cents per hour. A fire—supposedly started by a stove used to keep concrete from freezing in the winter—briefly delayed work. The new school could fit 160 elementary school students and one hundred high school students.

After years of rising costs and a shrinking student body, the district began to dissolve. Hanley Falls’ last senior class graduated in 1968. By 1978, only fifth- and sixth-grade classes still used the building. But the school was not empty for long. That November, the local farm machinery enthusiasts paved the way for Yellow Medicine County to buy the building for one dollar.

With grants from the Minnesota Historical Society and the county, a Museum Board formed. The Yellow Medicine County Agricultural and Transportation Museum opened less than two years later. It featured a traveling Smithsonian exhibit, “The Tall Grass Prairie.” Dedication ceremonies were held in early August of 1980 during the annual Threshing Show. Lowell Gustafson proclaimed the crowd that weekend to be the biggest Hanley Falls had ever seen.

Conrad and Alice Velde of Granite Falls donated the museum’s first artifact: a high-wheeled wooden farm wagon. The collection grew, and in 1982, a steel building opened to house larger machinery. A few years later, the Oliver H. Kelley Farm donated a replica of the first McCormick reaper. In 1994, the museum changed its name to the Minnesota Machinery Museum.

In the 2010s, the Minnesota Machinery Museum manages a collection spread among five buildings on a six-acre lot. Visitors can see plows dating back to 1877. The oldest tractor in the collection is from 1912. One of the horse-drawn scrapers that WPA workers used on the school building sits in the old gymnasium.

Collections also include old farm toys, blacksmithing tools, horse equipment, interviews with local residents, and art similar to what might have hung in turn-of-the-twentieth-century farmhouses. Rooms in the school building feature different themes: 4-H, Future Farmers of America, railroads, local history, and the school itself. Trophies, sweaters, pennants, and yearbooks from the old Hanley Falls School are on display. The building still hosts high school reunions for Hanley Falls alumni.

Above the main entrance, a bas-relief sculpture by an anonymous WPA artist depicts an American Indian and a fur trader shaking hands. It was moved from St. Paul to Hanley Falls for the new school building in 1939. Artist Mark Lamin painted the mural, which was originally white, in 1983.

The museum has housed other Smithsonian exhibits, including “Barn Again!” in 2005 to celebrate its twenty-fifth anniversary and “The Way We Worked” in 2012. The Good Old Days Threshing Show, held on the museum’s grounds every August, is still its key event. In good weather, the show draws as many as three thousand people—ten times the population of Hanley Falls.

Natalie Heneghan holds a BA in History from Macalester College.