Arts & Culture
MNopedia
This content is shared with MinnPost by MNopedia, the digital encyclopedia created by the Minnesota Historical Society and supported by the Legacy Amendment’s Arts and Cultural Heritage Fund.
Dec. 1, 2015 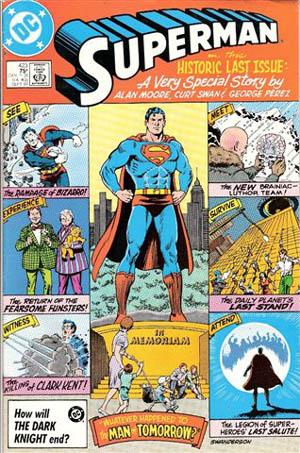 After 1986, Swan never drew a Superman story again. But he worked for DC Comics the rest of his life.

Two young men from Cleveland, writer Jerry Siegel and artist Joe Shuster, created the character of Superman in the 1930s. But it was Curt Swan, a Minnesota artist, who defined Superman’s look in comic books of the 1950s, 1960s, and 1970s.

Douglas Curtis Swan was born in Minneapolis to Leontine J. (Hansen) and John P. Swan on February 17, 1920. His father worked for the Chicago, Milwaukee, St. Paul and Pacific Railroad. In the 1930s, during the Great Depression, a teenaged Curt Swan had to go to work to help support his family. He held various jobs, including that of a clerk for the Haas Letter Delivery Service and a day laborer. But even at a young age, he realized he was happiest when he could spend hours drawing.

World War II gave him that opportunity. In October 1941, at age twenty-one, Swan enlisted in the U.S. Army National Guard. When the Japanese bombed Pearl Harbor that December, Swan’s military services was extended for the duration of the war. Many young men his age ended up on the battlefields of Europe and the Pacific. But Swan used his artistic talent for the U.S. military’s newspaper, Stars and Stripes, illustrating stories and drawing cartoons.

Swan married in the last year of the war. When the war ended, he and his bride, Helene, moved to New York City. There, Swan met with former Stars and Stripes writer Eddie (“France”) Herron, who had produced comic-book scripts before the war. On Herron’s advice, Swan sent samples of his art to DC Comics, which hired him in December 1945. His first published DC Comics drawings appeared in an early 1946 issue of Boy Commandos.

Mainstream and superhero comic books were at that time — and still are — created by a team. A writer scripts a story. A penciler takes the script and translates words into pictures. An inker adds detail to the penciled lines. Then the letterer and colorist add finishing touches. Early on, Swan decided he wanted to be a penciler.

He learned on the job. Swan loved to add extra detail to his characters and settings. But the fast pace of comic-book publishing forced him to speed up. He had to draw dozens of pages a month. In order to keep up, he began simplifying his style.

In the 1950s, Swan was asked to design covers for Superman comics. Occasionally he also penciled Superman stories. His big break came in 1954, when he became the artist on a new comic-book series, Jimmy Olsen. At last he was the primary penciler on a series and a Superman spinoff at that. From 1958 to 1961, he also labored on the daily Superman comic strip. Coincidentally, Swan took over the strip from another Minnesota-born artist, Wayne Boring.

By 1970, Swan was the principal artist on some of DC Comics’ biggest titles, Superman and Action Comics. For the next two decades, he determined the appearance and atmosphere of the Superman universe and its cast of characters, including the Man of Steel himself, Jimmy Olsen, Lois Lane, Lex Luthor, and Perry White.

After 1986, Swan never drew a Superman story again. But he worked for DC Comics the rest of his life. In all, he spent fifty-one years at DC Comics. He is probably the artist most often associated with Superman, and later Superman artists have referred to his art when creating their own version of the comic-book icon. Swan died on June 17, 1996, in Wilton, Connecticut.