Arts & Culture
MNopedia
This content is shared with MinnPost by MNopedia, the digital encyclopedia created by the Minnesota Historical Society and supported by the Legacy Amendment's Arts and Cultural Heritage Fund.
Dec. 22, 2015 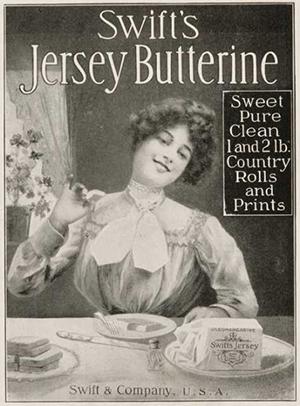 Courtesy of the Minnesota Historical Society
During the 1910s, oleo mixed with a small percentage of dairy butter — often called “butterine” — became increasingly common and popular.

During the late 1800s, dairy farmers in Minnesota and other states faced what they considered a serious and immediate threat to their livelihoods: the growing popularity of a butter substitute called oleomargarine. For nearly a century, the dairy industry and its legislative allies waged a series of campaigns to prohibit or limit the manufacture and sale of margarine. No state retained its anti-margarine laws longer than Minnesota.

Margarine’s origins dated back to 1867, when a French chemist named Hippolyte Mège-Mouriès—seeking a prize offered by Emperor Napoleon III — developed a process for turning beef tallow and milk into a spread that tasted like butter. Mège-Mouriès called his product oleomargarine. (It later became widely known simply as oleo and margarine.) In 1873, Mège-Mouriès’s oleomargarine manufacturing process received a U.S. patent. American oleo manufacturing began in earnest a few years later.

Margarine’s arrival in the United States coincided with the country’s shift from an agricultural to an industrial economy. Many farmers worried that products made in laboratories and factories would replace traditional agricultural goods. Oleomargarine, with its similarities to butter, seemed like a particularly ominous threat. Dairy organizations throughout the country began lobbying Congress and state legislatures to pass protective anti-margarine laws.

In 1885, Minnesota became one of the first states in the nation to prohibit the production and sale of oleo. Two years later, Governor Lucius Hubbard announced that sales of “oleomargarine and its kindred abominations” had virtually stopped in Minnesota. But a new federal law, enacted in 1886, recognized margarine as a legal product subject to taxes and regulation. Minnesota’s anti-oleo law was no longer valid. The battle over margarine entered a new, back-and-forth phase focusing on regulation and taxation.

In 1891, dairy organizations in the state helped convince the legislature to pass what was known as a “pink law.” Under the new law, oleo could now be legally manufactured and sold in Minnesota, but it had to be colored pink. Since few consumers relished the idea of slathering a pink, butter-like spread on their toast, the pink law effectively halted all sales of oleo in the state in the 1890s. But in 1898, the U.S. Supreme Court declared pink laws unconstitutional. Oleo was now legal in Minnesota. The skirmishes over how available it would be to consumers, however, were far from over.

The margarine debate in Minnesota and across the country began focusing on the distinctions between colored and uncolored oleo. Dairy producers argued that margarine in its natural state was an unappealing white, and that margarine producers should be prevented from artificially coloring their product a butter-like yellow. According to this view, yellow margarine was a fraud meant to trick consumers into thinking they were buying and eating butter. Makers of oleo countered that the manufacturing process often produced a yellow-tinted product. Strict labeling laws, they argued, made deception impossible.

Dairy producers scored a major victory in 1902, when the federal government enacted a new law imposing much higher taxes on yellow margarine than on white margarine. Three years later, Minnesota further strengthened the dairy industry’s position in the state by enacting one of the toughest anti-oleo laws in the nation: a prohibition on the manufacture and sale of any margarine “made or colored to imitate yellow butter.”

Consumer demand for oleo continued to grow, despite the many restrictions on its production and distribution. As a result, increasing numbers of Minnesotans began running afoul of the state’s anti-margarine laws. In 1908, the Hammond Packing Company of Minneapolis was found guilty of manufacturing illegal yellow oleo. The Minnesota Supreme Court later overturned its conviction. A few years later, a grocer named Ole Hanson was charged with illegally selling yellow margarine at his store in Mankato. He was acquitted when the Minnesota Supreme Court ruled that the state’s ban on yellow oleo was unconstitutional.

Repeated court setbacks failed to dissuade Minnesota’s anti-margarine crusaders. State legislators continued to tinker with the law in hopes of crafting restrictions that would stand up to judicial scrutiny. In 1913, they approved a revision that stated all oleo manufactured and sold in the state must be “fifty-five percent of white according to the methods and measurements used by the Bureau of Standards.” The fifty-five percent standard was, for all practical purposes, a creative way to re-impose the ban on yellow margarine without directly defying the state’s supreme court. The revised anti-margarine law remained on the books largely unchanged for the next several decades.

Undeterred, oleo producers continued to look for ways to move their product legally to market and increase consumer demand. During the 1910s, they started packaging white margarine with packets of artificial food coloring so that consumers could knead it in by hand. They also began experimenting with new ingredients to improve taste. Oleo mixed with a small percentage of dairy butter — often called “butterine” — became increasingly common and popular. And price, as always, worked in margarine’s favor. In 1916, the price of a pound of high-grade oleo averaged twenty-six cents in Minneapolis and St. Paul. The average price of a pound of high-grade butter was forty cents. Minnesotans responded by buying 1.5 million pounds of margarine a year.

Anti-margarine forces continued to hold sway in Minnesota for several decades after the battles of the late 1800s and early 1900s finally cooled down. Arguments that restrictions on oleo hurt budget-conscious Minnesotans failed to make much difference. If anything, the restrictions only grew tighter. In 1933, the state imposed a new ten-cent tax on white oleo, while maintaining the effective ban on yellow margarine. In 1945, it extended that tax to newer types of oleo made with vegetable oils.

In 1950, the federal government repealed its long-standing tax on margarine. With much of the margarine sold in the United States now being made with vegetable oil produced by American farmers, agriculture’s united front against oleo began to crumble. States started reassessing their anti-margarine laws. One by one, the state laws disappeared. Most states were quicker to drop their bans on yellow margarine than they were to give up the revenue produced by margarine taxes.

Minnesota, however, took its time. It wasn’t until 1963 that the state legislature finally voted to legalize yellow margarine. And even then, the opponents of oleo did not concede gracefully. A few weeks before the final vote on legalization, state inspectors engaged in a final crackdown on illicit margarine. Among the unlucky scofflaws was the owner of a Scandinavian restaurant in Minneapolis who was caught serving lutefisk with an illegal mixture of melted yellow oleo and butter.

Minnesota continued to tax oleo for another twelve years. By that time, it and North Dakota were the only states doing so. The oleo taxes in both states expired on the same day — July 1, 1975.

Yellow margarine was illegal in Minnesota until 1963