Arts & Culture
MNopedia
This content is shared with MinnPost by MNopedia, the digital encyclopedia created by the Minnesota Historical Society and supported by the Legacy Amendment’s Arts and Cultural Heritage Fund.
Jan. 5, 2016 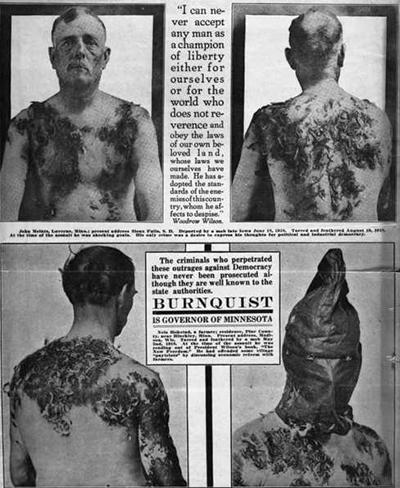 Courtesy of the Minnesota Historical Society
Men tarred and feathered in Minnesota during 1918 campaign by anti-Nonpartisan Leaguers, c.1918.

When the United States entered World War I in 1917, Germans were the single largest ethnic group in Minnesota. Nativism during this period was a “patriotic” attitude that saw recent immigrants — particularly those of German descent — as potentially traitorous. Many felt that because German Americans shared their heritage with the Kaiser and the German Empire, they would side with the enemy power. That many German Americans advocated neutrality until the U.S. declared war was further proof of disloyalty to nativists.

The most conspicuous nativist agency was the Minnesota Commission of Public Safety (MCPS). Created by the state legislature in April of 1917, the MCPS was a seven-person commission headed by Governor J. A. A. Burnquist. It was given near-dictatorial powers to support the war effort at home and root out disloyal elements. While much of the commission’s activity focused on attacking labor advocates and political dissenters in the Nonpartisan League and the Industrial Workers of the World, the MCPS kept a close watch on German Americans as well. There was, in fact, much cross-over between these two groups, since many German Americans were both socialists and pacifists.

The MCPS took drastic action in dealing with a gathering in New Ulm on July 25, 1917. The meeting was organized by Brown County Auditor Louis Vogel, Mayor Dr. Louis Fritsche, and city attorney Albert Pfaender. Its agenda was to discuss the constitutionality of the draft. The MCPS and its agents already suspected Pfaender and Fritsche of sedition. A month later, Burnquist had them both deposed.

Another victim of the July 25 rally was Adolph Ackermann, president of Dr. Martin Luther College. During the demonstration, he gave a speech questioning the government’s motive for entering the war. In response to his comments, the MCPS coerced the college to force Ackermann’s resignation.

Nativism sometimes served personal and business interests. After Fritsche was removed from office, the MCPS pressured the State Medical Society and the Brown–Redwood County Society to revoke the ex-mayor’s medical certification. Two doctors on the review panel who voted against Fritsche ran practices in Springfield, a town in keen business competition with New Ulm. Fritsche was eventually exonerated.

Another vested-interest case unfolded in Springfield, where mostly German American stakeholders proposed creating a new bank. The president of the existing State Bank of Springfield submitted the names of those stakeholders to the MCPS to investigate their loyalty.

Some members of the Catholic Church also stood to benefit from anti-German policies. Archbishop John Ireland had long promoted the “Americanization” of the Church. During the war, this attitude gained ground. The archbishop urged that English should be the only language of church liturgy — a move that alienated German Catholics and their clergy, who conducted mass in German. This division allowed many Irish Catholics to assume leadership positions at the expense of their German counterparts.

The German-language press was an obvious target. The MCPS kept a close eye on many of these publications. Albert Steinhauser, publisher of the New Ulm Post and the New Ulm Review, featured many German articles in his papers that criticized the war. Under pressure from the commission, he was arrested and expelled from the Minnesota State Editorial Association in 1918. Even more severe, federal authorities jailed Volkszeitung editor Frederick W. Bergmeier of St. Paul for the duration of the war.

Perhaps the most hotly debated nativist issue was the use of German in the classroom. Many schools, both public and parochial, used German as the primary language of instruction. While Minnesota did not ban this practice outright, the MCPS did urge school boards to make English the exclusive educational language, with the exception of foreign language courses.

The commission compiled a list of objectionable textbooks that could not be used for the teaching of German. Catholic parochial schools also faced strong pressure from religious leaders to abandon German. Both Archbishop Ireland and Stearns County Bishop Joseph Busch strongly pressed for the exclusive use of English in Catholic schools.

Teachers also suffered as a result of nativist activity. In Wabasha County, public school teacher Irene Bremer resigned and lost her teaching certificate after making alleged pro-German comments. She was ordered by the MCPS and a superintendent to attend a normal school and prove her loyalty in order to teach again.

German Minnesotans responded to nativism in different ways. While many spoke their minds and suffered, others kept quiet and out of sight. Some became vehement and vocal “patriots” or “100% Americans” in order to deflect suspicion. A few even spied on other Germans for the MCPS. The replacements for both Fritsche and Pfaender were themselves German Americans. Bishop Busch, the stalwart “Americanizer,” was of Austrian stock.

On February 25, 1918, the MCPS began registering unnaturalized aliens (non-natives to the United States) at its St. Paul headquarters. On April 1, in the same city, a statue personifying the nation of Germany called “Germania” was removed from the Germania Life Insurance Building, soon renamed the Guardian Life Insurance Company of America.

The MCPS and other officials both represented and sanctioned a general culture of fear and hostility against German Americans. Such antagonism manifested itself throughout society at large. Indeed, many of the investigations conducted by the commission were petitioned by private citizens. This created a climate of paranoia and violence. Fritsche and his family, after his disgrace, lived in fear of their well-being and lives; this was by no means unusual for victims of nativism. Nativist Minnesotans boycotted their German neighbors’ stores, vandalized their property, and called for them to resign from their jobs.

A particularly gruesome case of violence occurred in Luverne. On August 19, 1918, John Meints, a German American farmer suspected of disloyalty, was kidnapped by a large group of men and driven to the South Dakota border. Whipped, tarred, and feathered, he was told that if he returned to Minnesota, he would be hanged. Meints later sued thirty-two men for false imprisonment for $100,000. Though the court sided with the defendants, a 1922 settlement awarded him six thousand dollars.

When World War I ended, so did much of the MCPS’s justification. It was abolished by legislative act in 1919 and met for the last time in 1920. With the commission’s demise and the end of the war, anti-German nativism lost much of its momentum.

During World War I, Minnesota nativists waged an all out war on German culture in the state