Arts & Culture
MNopedia
This content is shared with MinnPost by MNopedia, the digital encyclopedia created by the Minnesota Historical Society and supported by the Legacy Amendment’s Arts and Cultural Heritage Fund.
Jan. 12, 2016 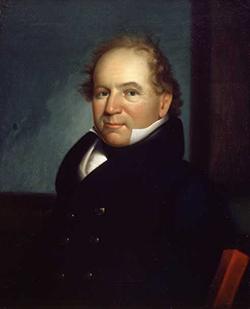 Bravery at the Battle of Tippecanoe and during the War of 1812 distinguished the military career of Colonel Josiah Snelling, but he is best known for commanding Fort Snelling in the 1820s. It was the first permanent U.S. government outpost in what would become the state of Minnesota.

Josiah Snelling was born in Boston in 1782. His family ran a successful baking business, but he built his career by enlisting in the military and working his way up. He first enlisted in the Massachusetts militia as a sergeant in 1803, and then joined the Fourth Infantry Regiment as a first lieutenant in 1809.

Snelling married Elizabeth Bell on August 29, 1804. She gave birth to William Joseph in December of the same year. Elizabeth died in 1810, at the age of twenty-two.

Snelling continued to rise through the ranks. As a captain, he led a decisive charge that was vital to General William Henry Harrison’s victory at Tippecanoe in 1811. He distinguished himself again during the War of 1812, when he was brevetted major for bravery at the battle of Brownstown. Also during the war, Snelling, then thirty, married fifteen-year-old Abigail Hunt on August 13, 1812, in Detroit.

The Snellings spent the years after the war stationed in Plattsburg, New York. There, Abigail gave birth to Henry Hunt on November 8, 1816. He was the second child of Josiah and Abigail; their first, Mary, had been born in 1813. They had three more children who survived past infancy: James, born in 1822; Marion, born in 1825; and Josiah, born in 1827.

A lieutenant colonel by 1818, Josiah Snelling was promoted to full colonel of the Fifth Infantry Regiment on June 1, 1819. He was ordered to the confluence of the Mississippi and St. Peters (now Minnesota) Rivers to replace Lieutenant Colonel Henry Leavenworth and establish a headquarters for the Fifth Infantry. After a year at the confluence, Leavenworth’s men had established only temporary quarters.

After his arrival in the fall of 1820, Snelling quickly broke ground on the first permanent barracks. With the help of engineer Lieutenant Robert McCabe, Snelling designed a diamond-shaped, limestone fort on the bluff above the rivers. This construction took five years for the enlisted men to complete.

By 1821, the post was given the official name of Fort St. Anthony. General Winfield Scott made an inspection in 1824 and recommended that it be renamed for its commander. In 1825, the name Fort Snelling became official.

Snelling’s command of the fort focused on survival. He could not always count on the long supply lines that supported it. His men spent most of their time farming and cutting timber, and Snelling was criticized by his subordinate officers for the lack of military drilling that took place.

As commandant, Snelling also collaborated with Indian Agent Lawrence Taliaferro to represent the U.S. government in meetings with the Dakota and Ojibwe, largely to settle disputes that could disrupt trade.

Snelling illegally utilized the labor of enslaved people in his household at the fort. He rented the labor of a man named William from Taliaferro, and purchased two women, Mary and Louisa, in 1827.

The colonel was not immune to the tensions that often ran high between officers stationed at the post. Although the articles of war forbade dueling, Snelling made it known that he would accept personal challenges from his subordinates. When Lieutenant David Hunter, who had a history of conflict with William Joseph, challenged him, Snelling had Hunter arrested for conduct unbecoming of an officer. Later, Snelling accepted the quarrelsome Lieutenant Joseph Baxley’s challenge, but Snelling’s heavy drinking prevented them from ever exchanging shots.

Snelling contracted chronic dysentery during the War of 1812, and by 1826, his health was failing. Both his illness and its treatment — typically opium and brandy — may have affected his judgment and command of his subordinates.

Snelling and his family left Fort Snelling in October of 1827, when he was ordered to Jefferson Barracks to testify in Hunter’s court martial. He then went to Washington, D.C., to answer for undocumented expenditures made on the army’s behalf. Snelling faced a possible court martial for embezzlement and for accepting Baxley’s duel challenge. He died in Washington on August 20, 1828, before the accusations against him could be investigated.

Sarah Shirey holds a B.A. in History from Loyola University Chicago. She has worked for the Minnesota Historical Society as an interpreter at Historic Fort Snelling and the Minnesota State Capitol. She has also served as a volunteer researcher and writer for MNopedia.

So who was this Snelling guy, anyway?