Arts & Culture
MNopedia
This content is shared with MinnPost by MNopedia, the digital encyclopedia created by the Minnesota Historical Society and supported by the Legacy Amendment’s Arts and Cultural Heritage Fund.
Feb. 2, 2016 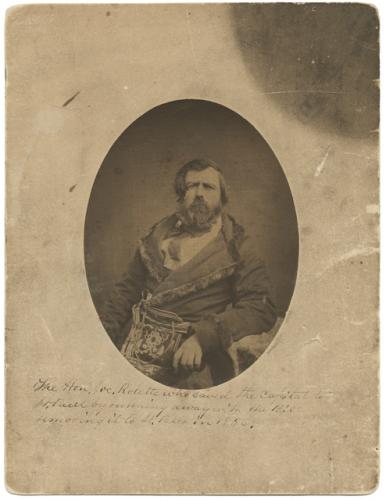 Courtesy of the Minnesota Historical Society
Joseph Rolette in the garb of a fur trader, c.1860.

Joseph Rolette was a fur trader and politician during Minnesota’s territorial period. A colorful character in his time, Rolette is remembered for the drastic action he took to prevent removal of Minnesota’s capital to St. Peter.

Rolette was born on October 23, 1820, in Prairie du Chien, Michigan Territory, in what is now Wisconsin. His parents were Jean Joseph Rolette and Jane Fisher. Rolette’s father was a prominent French Canadian fur trader who by the 1820s was employed by the American Fur Company. As a child, Rolette was taken to live in New York by some of his mother’s relatives. He was educated at a private school there under the protection of Ramsay Crooks, the president of the American Fur Company. In 1836, Rolette’s parents separated but did not divorce, since they were Catholic.

By 1840, Rolette had returned west and started working in the fur trade. He operated in the Red River Valley, conducting trade for his father’s partners, Henry Hastings Sibley and Ramsay Crooks. Rolette proved himself a valuable partner when he rebuilt a trading post at Pembina near the Canadian border in present-day North Dakota. He defended the post and was responsible for business conducted there.

In 1842, Rolette created a line of trade carts that ran on the Red River trails. The trails allowed for efficient trade and communication between Pembina and St. Paul. The system of Red River ox carts made the American trade in the region more competitive. They also diverted business from the rival Hudson’s Bay Company in British Canada. The commerce Rolette directed to St. Paul helped the city become the commercial hub of the region.

Rolette married a Métis woman from Pembina named Angélique Jerome in 1845. The marriage solidified his connection to the Pembina community. The couple had eleven children. In October, 1851, Rolette’s political career began when he was elected to represent Pembina in Minnesota’s territorial legislature. His first trip to the legislature took him eighteen days by dogsled. When he arrived, his dogs famously entered the capitol building with him. As a Democrat, Rolette was reelected to the territorial House three times and served until 1856. In January of 1856, he began serving on the Territorial Council and became the chair of the Enrolled Bills Committee.

It was as chair of this committee that Rolette made his most famous contribution to Minnesota history. In February of 1857, a bill to remove the capital of Minnesota to St. Peter passed the territorial legislature. The bill was sent to the Enrolled Bills Committee, and had to pass through Rolette before it could be signed by the governor. Rolette came into possession of the bill on or before February 28, 1857, a few days before the end of the legislative session.

Once he had the bill in hand, Rolette disappeared. The sergeant-at-arms of the council searched St. Paul for the missing chairman. Legislators waited for him to be found and endured a 123-hour session, during which many of them slept in the chamber. Rolette opposed removing the capital to St. Peter and seems to have been aided in his disappearance by some citizens of the city.

Many versions of this story exist. Some state that Rolette spent his time drinking and playing cards with friends in a hotel after depositing the bill in a bank safe. Others state that the hotel was actually a brothel.

The claim that Rolette’s actions “saved” the capital for St. Paul is untrue. In reality, the process of removal continued until a federal district judge ruled the removal act unconstitutional.

During the Civil War, Rolette was unable to obtain a military commission, and throughout the 1860s his fortune dwindled. He served as a postmaster at Pembina and as a United States customs officer. His health deteriorated and on May 16, 1871, he died in Pembina.