Arts & Culture
MNopedia
This content is shared with MinnPost by MNopedia, the digital encyclopedia created by the Minnesota Historical Society and supported by the Legacy Amendment's Arts and Cultural Heritage Fund.
March 29, 2016 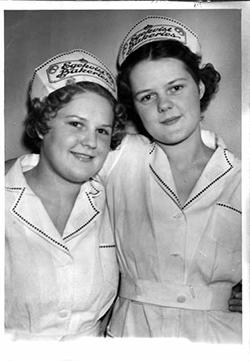 From 1906 to the 1960s, Danish-born brothers Valdemar and Soren Egekvist built a model of immigrant enterprise. They applied Old World skills in a New World economy. Their chain of Minneapolis bakery stores ultimately led to nationally distributed baked goods.

As partners in business, their name was their “brand.” But their family name wasn’t originally Egekvist. Valdemar was born after his parents, Ane Kathrine and Soren Andersen, had been married eight years. In his honor, the family adopted “oak twig” (Egekvist) as a new name, because oak trees take the longest to sprout twigs.

In Denmark, the Andersen/Egekvists were millers and bakers. Their specialty was pumpernickel. Teenaged Valdemar spent a three-year unpaid apprenticeship at a baking school, but was eager to emigrate. In 1904, he came to Tyler, a town populated almost entirely by Danes. In 1908, he had a bakery to call his own.

Soren joined him in 1914, after brief careers as a machinist and a millionaire’s chauffeur. Both brothers kept up with Danish baking traditions, importing special machinery so that they could make baked goods to European specifications.

Their business thrived on variety and close attention to location. In the 1930s, they offered ten different kinds of white bread, nine of wheat, and thirteen of rye. That is in addition to the dozens of sweet rolls, coffee cakes, tarts and “dainties and specialties” in the company catalogue. A 1947 news article estimated they offered 500 different items in a year.

There was plenty of competition among Twin Cities bakeries. For example, in south Minneapolis there were 116 bakeries in 1937. But the Egekvists’ twist on the “neighborhood shop” was to centralize the baking. They then delivered to their stores all over the city. They might open or relocate shops every year, following demographic patterns of settlement and public transit. The company’s first two locations were on the all-important, mostly Scandinavian streets of East Franklin and Cedar Avenues. Cedar was also known at the time as “Snoose Boulevard” for the snuff-using immigrants who frequented the area. 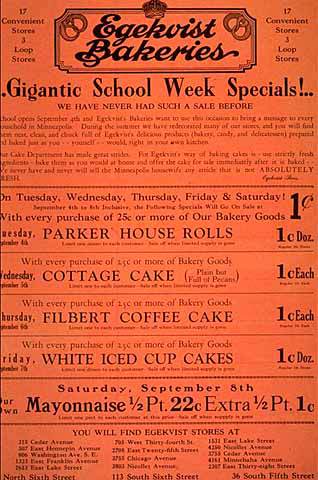 This “multiple unit retailing” strategy led the Egekvists to add in-supermarket racks of their products in 1948. In the larger stores of this postwar era, centralized retailing was dominant. A “branded” product within an all-purpose store was the way of the future. The pretzel-shaped, frosted Kringler pastry was a traditional European baker’s sign. The Egekvists paired it with a royal crown to create their distinctive trademark.

In the 1960s and 1970s, corporate consolidation was a national trend. Like many regional companies, after 1962 the Egekvist brand was bought and sold by a succession of larger and larger corporations. Products with the Egekvist name were sold into the 1990s, but the trademark is now defunct.

In Denmark, sweet rolls with fillings are called Vienerbrød, or “Vienna bread,” and many Americans use the simple term “danish.” Yet for decades in Minnesota, when shoppers looked for sigtebrød, spud bread, vortekage, or kavringer, they thought of Egekvist.

Phil Anderson is a Professor of Liberal Arts at the Minneapolis College of Art and Design. He teaches different histories of media, music and culture, and for many years was a freelance writer and critic for Minnesota publications.

Minnesotans of a certain age will remember the name ‘Egekvist’