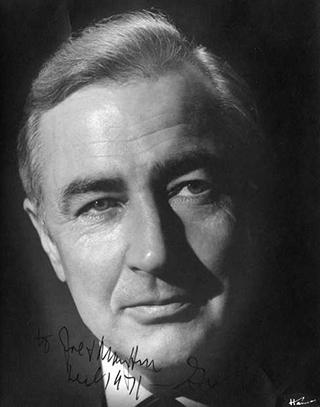 Senator Eugene McCarthy challenged President Lyndon Johnson for the 1968 Democratic nomination, mobilizing a youth crusade against U.S. intervention in Vietnam and changing the course of politics in Minnesota and the nation.

Eugene McCarthy was born in 1916 in the small central Minnesota community of Watkins. A scholarly boy and talented athlete, he attended nearby St. Johns University, embracing the Catholic social justice tradition he encountered there.

Returning from service as a code breaker for the Military Intelligence Division in 1946, McCarthy taught sociology and economics at St. Thomas University in St. Paul. He attracted a circle of young liberals and rose quickly in the Democratic Farmer Labor Party (DFL), winning election to Congress in 1948.

McCarthy distinguished himself in the House of Representatives. Nicknamed “the Needle” for his sharp wit, he was widely respected for his ability to articulate the heart of complex issues. By 1957, he helped organize a caucus of young liberals known as McCarthy’s Marauders. The organization and its set of legislative principles formed the basis of the influential Democratic Study Group.

In 1958, against the advice of many DFL Party insiders, McCarthy ran for the U.S. Senate, becoming the first Catholic ever elected to that position. Recognizing McCarthy’s legislative talents, the powerful Democratic majority leader, Lyndon Johnson, appointed him chair of the Special Committee on Unemployment Problems. The four-thousand-page report developed under McCarthy’s leadership became the blueprint for many of the domestic programs advocated by Presidents Kennedy and Johnson in the 1960s.

Elected to a second term in 1964, McCarthy joined the Senate’s Foreign Relations Committee. The war in Vietnam was continuing, with no end in sight. As the death toll mounted, he became increasingly critical of President Johnson’s continued escalation. When anti-war movement leaders sought a Democratic senator to do the unthinkable—challenge their party’s incumbent president — McCarthy was the only one willing to take up the call.

The first contest took place in the New Hampshire primary. Most experts expected President Johnson to defeat McCarthy in a landslide. Buoyed by an army of college-age volunteers, McCarthy received 42 percent of the vote. Convinced that he could not win re-election with a party divided by the war, Johnson shocked the nation when he announced that he would not run again.

McCarthy’s lonely challenge had sparked a movement—a “children’s crusade,” as the press referred to it. In his speeches, McCarthy mixed tough criticism of the administration’s war policies with poetry, philosophic musings, and sardonic wit. Some supporters looked for more passion and applause lines; others appreciated his unorthodox style as evidence of integrity.

With Johnson out of the race, two new candidates entered: Robert Kennedy, the heir to the legacy of his slain brother, John F. Kennedy, and Vice President Hubert Humphrey. With Humphrey refusing to break from the president’s war policies, Kennedy and McCarthy battled it out for leadership of the anti-war movement.

The decisive contest took place in California, where Kennedy’s passionate appeals to African American and working class voters proved decisive. His assassination, just minutes after his victory speech in a Los Angeles hotel, rocked the nation, splintered the anti-war movement, and made Humphrey’s nomination all but inevitable.

In early September, a badly fractured Democratic Party met in Chicago. The violent clashes between police and protestors in the street paralled the frustrations of delegates inside the convention. A movement that had begun with such hope just six months earlier in New Hampshire ended in defeat and disarray.

With Humphrey’s position on the war only slowly changing, McCarthy withheld his endorsement until the final days of the campaign. Humphrey narrowly lost to Richard Nixon.

The campaign of 1968 was a turning point for McCarthy. In opposing the president, McCarthy drew inspiration from Sir Thomas More, who chose principle over king and paid with his life. Emotionally exhausted, McCarthy withdrew for a time from politics, disappointing his followers by refusing to run for a third senate term in 1970.

He returned to writing, combining poetry with books on politics and public policy. Beginning in 1972, his maverick streak in full view, he ran a series of political campaigns, often as an independent or third party candidate. His wit and provocative intellect fully intact, he died of Parkinson’s disease in 2005.