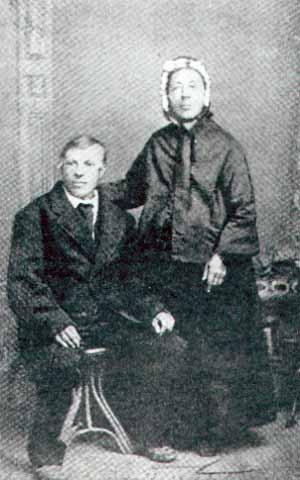 Wendelin Grimm was born October 18, 1818 in Kulsheim, Baden, Germany, to Valentine and Marie (Adelmann) Grimm. He grew up in a farm rich area of southern Germany, learning important crops and farming practices. In 1845, Grimm married Julianna Segner (born June 15, 1821) of Steinback, Baden, Germany. The Grimms chances to own a farm were limited by the land inheritance practices of the time. Farming and crop prices were under pressure, and their future in Germany looked grim. With a growing family to support, sons Frank and Joseph and daughter Ottilia, Wendelin and Julianna looked to America for their family’s future.

After landing in New York, the Grimm family chose to continue westward in search of good farmland. They reached Chaska about September 1, 1857. In 1859, a fourth child, Caroline was born. The same year, Grimm purchased 160 acres of land in Laketown Township (near Victoria) from John Neunsinger.

In 1872, Grimm purchased a second farm between Victoria and Chaska. When his oldest son Frank married Rosalia (Rosella) Pograbo, they took over the original farm, while the rest of the Grimms moved to the new one. On June 1, 1875, Joseph married Mary Agnes Browers, and eventually moved to Texas, back to Chaska, then to Tampa, Florida. Ottilia married Hubert Kelzer in 1889, and lived with her parents on the new farm, which has been passed down through the Kelzer family. Youngest daughter Caroline and husband William Glatzel settled a mile north of Chaska. Wendelin Grimm died December 8, 1890, followed by Julianna on October 28, 1897. Both are buried in the St. Victoria Cemetery, in Victoria.

Wendelin Grimm’ farming brought him fame. When the Grimms came to America, they packed a fifteen to twenty pound bag of “Lucern” or “Ewiger Klee” (everlasting clover). Grimm began planting this feed crop over the winter months, saving the seeds that survived the cold temperatures, and replanting them the following year. Over the next fifteen years, more seeds survived, though the winter of 1874-1875 was so harsh it nearly caused his whole crop to die out. Grimm alfalfa became winter hardy, grown year round to keep cattle and dairy cows well fed.

At first, Grimm only sold this crop to his neighbors, as they noticed how well fed his cows were. Elsewhere in Minnesota, farmers let animals graze on vacant land or open range. The Enclosure Act of 1871 changed this. Fences were built, and feed crops needed. By 1889, Carver County was producing nearly fifty percent of all alfalfa in the state. In the 1890s, the growth of the dairy industry in the “Golden Buckle of the Dairy Belt” led to even more alfalfa being grown. Farmers wanted the hardier Grimm alfalfa for its high yields, high protein content, ability to return nutrients to the soil, ability to crowd out weeds, and hardiness in cold climates.

Over time, local farmers like A.B. Lyman, researchers like Charles Brand, and University of Minnesota Agricultural Extension Station head Professor Willet Hays (later U.S. Assistant Secretary of Agriculture) brought national attention to Grimm alfalfa. Tests comparing it to other strains proved its better quality. A.B. Lyman grew so much of it, his farm became known as “Alfalfadale”. In 1916, the Grimm Alfalfa Growers Association began in North Dakota. By the 1930s, Grimm Alfalfa was the preferred variety in the United States. In the twenty-first century, Grimm Alfalfa is credited by the USDA as the source of all modern varieties of alfalfa grown on more than twenty-five million acres of farmland in the United States. It is valued at ten billion dollars annually.

In 1924, the Grimm Alfalfa Growers’ Association honored Wendelin Grimm’s achievement with a plaque on his original farm. In the 1950s, the farm became part of a conservation land reserve. In 1963, this land became the Carver Park Reserve. In 1974, the Grimm house and farm were designated on the National Register of Historic Places. In the twenty-first century, there are tours, living history, and agricultural practice demonstrations on the site.

Heidi Gould has a B.A. in Anthropology from the University of North Dakota and an M.A. in Museum Studies (focus in Museum Education) from Indiana University/Purdue University- Indianapolis (IUPUI). She has worked for the Science Museum of Minnesota, the Children's Museum of Indianapolis and the Eiteljorg Museum of American Indians and Western Art. She is currently employed at the Carver County Historical Society as Education and Volunteer Coordinator.