Arts & Culture
MNopedia
This content is shared with MinnPost by MNopedia, the digital encyclopedia created by the Minnesota Historical Society and supported by the Legacy Amendment’s Arts and Cultural Heritage Fund.
Dec. 2, 2016 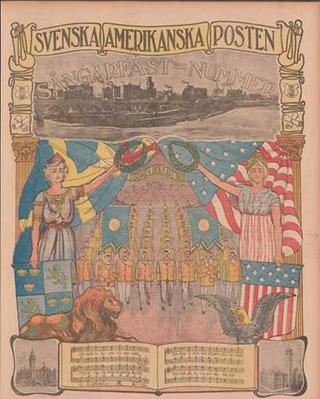 Courtesy of the Minnesota Historical Society
A color page of Svenska Amerikanska Posten from the “Sångarfäst=Nummer” edition (July 21, 1903).

Published in Minneapolis between 1885 and 1940, Svenska Amerikanska Posten (the Swedish American Post) was one of the largest and most popular Swedish-language newspapers in the United States. It catered to an urban, secular segment of the Swedish American community.

The first issue of Svenska Amerikanska Posten was published on March 9, 1885, by the Swedish-American Publishing Company. It was the fourth Swedish-language weekly in Minneapolis. The paper began as a mouthpiece of the temperance movement, but by the 1890s it became a more independent, liberal newspaper.

Similar to other Swedish American newspapers at the time, Svenska Amerikanska Posten reported on international, national, and local news. The paper’s first page reported general news about the United States and Minneapolis. The second featured editorials and a serialized novel; the third recounted news from Sweden; and the fourth was reserved for news about Swedes in Minneapolis and St. Paul. The paper struggled financially at first, due in part to a series of libel lawsuits filed in response to false editorials written by its controversial first editor, N. P. Lind.

Finances revived under the leadership and initiative of Swan J. Turnblad, who took over management in fall 1886. Turnblad secured more advertisements and subscriptions and moved the paper away from its prohibition- and temperance-focused content. In 1889, he became the largest shareholder of the paper’s publishing company. Turnblad’s brother Magnus was named editor-in-chief in 1890 and held that post for twelve years.

Swan Turnblad’s business acumen and drive to improve the paper’s content, circulation, and technology led Svenska Amerikanska Posten to great success. At the time, the paper was printed on a rotary press. By 1894, the type was set on a Mergenthaler machine—a first among the Swedish presses.

The paper’s circulation and size grew quickly as Turnblad introduced innovations and conducted experiments. These included one of the first cartoons in a Swedish-language paper (1901); the English-language children’s supplement Posten Junior (1902); and English editorials. In 1907, Turnblad introduced another technological advancement: a Duplex rotary press with a color attachment.

After twelve years as editor-in-chief, Swan Turnblad’s brother Magnus departed from the paper in 1902. In the following years, there was a large turnover in the paper’s staff.

1915 marked a banner year for Svenska Amerikanska Posten. The paper moved out of a rental space and into a building of its own, which was a symbol of the paper’s prosperity and success. It also reached a circulation of 56,000—the largest in the paper’s history.

The paper declined during World War I, primarily due to increased anti-immigrant sentiment and rising production costs. The number of immigrants to the United States also decreased. Turnblad decided to step down as publisher and sold the paper in October 1920. The new publisher, Magnus Martinson, ran the paper from 1920 to 1927. He started a monthly book review journal called Hemmet that was published from 1925 to 1927. After Martinson had driven the paper to the brink of bankruptcy, Turnblad was asked to return to work as manager and publisher by the paper’s board of directors.

In 1929, Turnblad included funds for the paper and its production plant in a donation to create the American Institute for Swedish Art, Literature, and Science, later known as the American Swedish Institute. Turnblad continued to lead the paper until his death, in 1933.

The Depression caused more problems for Svenska Amerikanska Posten, affecting both readership and affordability. In 1940, publication ended when Turnblad’s daughter, Lillian, sold the paper to Chicago’s Svenska Amerikanaren–Tribunen, the last of the large Swedish American newspapers.

Julia has a B.A. in history, American studies, and media studies from St. Olaf College, and was a MNopedia intern between September and December of 2016.

Jillian is a program associate in the Digital Collections Services department at the Minnesota Historical Society.

Of course one of the U.S.’s largest and most successful Swedish language newspapers was published in Minneapolis

By Julia Lavanger and Jillian Odland