Arts & Culture
MNopedia
This content is shared with MinnPost by MNopedia, the digital encyclopedia created by the Minnesota Historical Society and supported by the Legacy Amendment's Arts and Cultural Heritage Fund.
Dec. 13, 2016 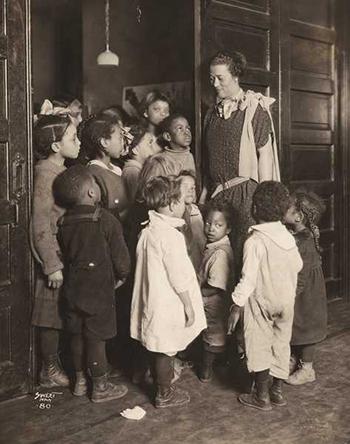 Founded in 1924, the Phyllis Wheatley House was the first settlement house to serve the social service needs of African Americans in Minneapolis. In the 1930s, it became a center of African American life at a time when racial segregation divided the city.

In the late 1910s, a growing number of young, single women were moving to large cities like Minneapolis, looking for work. Concerns for these women’s personal and moral safety moved many social services agencies to provide them with housing, recreational activities, and other assistance.

While there were many services for young, single white women, segregation prevented their African American counterparts from receiving the same help. In 1920, two social service agencies, the Council on Social Agencies and the Women’s Cooperative Alliance (WCA), noticed the lack of programs for young, single black women.

After considering opening a boarding house for these women, the agencies realized that all of Minneapolis’ African American citizens lacked services. The WCA decided to open the first settlement house for the city’s small, but growing, black community.

Named after Phyllis Wheatley, an eighteenth century enslaved woman who became a well-known poet, the Phyllis Wheatley House opened on October 17, 1924, in the old Talmud Torah Hebrew School at 808 Bassett Place. It was located in a mostly black neighborhood in North Minneapolis.

The Wheatley House’s primary goal was to provide social services and a community center for African Americans. Its programs focused on recreation, education, music, and theater. W. Gertrude Brown, an African American social worker from Dayton, Ohio, was hired as the house’s first head resident.

Under Brown’s direction, and with guidance from its board of directors (all white women), the Wheatley House quickly outgrew its location on Bassett Place In 1926, it began fundraising to build a new building.

On October 17, 1929, a newly constructed Wheatley House opened at 809 Aldrich Avenue North. This larger building provided not only new space for recreational and educational activities but also a library, day care, a medical clinic, and lodging.

By the late 1920s and early 1930s, the Wheatley House had become a center of African American life in Minneapolis and offered services that other settlement houses did not. It was a boarding house for black college students blocked by segregation from living in the University of Minnesota dorms. It housed visiting black luminaries, including Marian Anderson, W. E. B. DuBois, Langston Hughes, and Paul Robeson, who could not stay in Minneapolis hotels. It was a meeting space for black groups like the National Association for the Advancement of Colored People (NAACP) and the Brotherhood of Pullman Porters, who were not welcome at other places in the city.

The Wheatley House also fought for social reform. In spring 1940, it worked with the Urban League to prevent a revival showing of the 1915 movie The Birth of a Nation in Minneapolis. Board members successfully pushed for the appointment of Ethel Ray Nance, the city’s first black police woman. It provided many black children with amenities they might not have otherwise received, such as summer camp, nursery school, and organized sports. Many of these children later described the Wheatley House as a home away from home—a place where they could build self-confidence.

During the 1950s and 1960s, as the federal government began providing more social services, the need for settlement houses decreased. By 1965, planners discussed a merger between the three North Side settlement houses: Wheatley, Unity, and Wells Memorial. They aimed to cut operating costs and coordinate their services. In the end, the merger never occurred; the Wheatley House continued to operate independently.

Heidi Heller holds a B.A. in history from Augsburg College and is currently working on a master’s degree in information and library science from the University of Wisconsin-Milwaukee. She works as a library and archival assistant for the Stearns History Museum.