Arts & Culture
MNopedia
This content is shared with MinnPost by MNopedia, the digital encyclopedia created by the Minnesota Historical Society and supported by the Legacy Amendment’s Arts and Cultural Heritage Fund.
Dec. 20, 2016 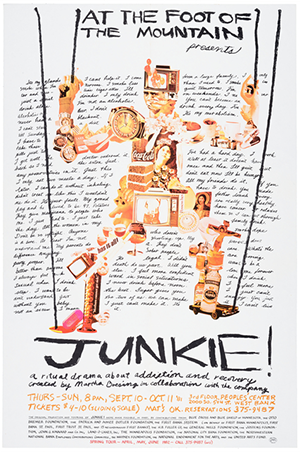 Courtesy of the Minnesota Historical Society
A playbill for At the Foot of the Mountain’s “Junkie!”

The women’s theater movement began in the early 1970s and continued until the mid–1980s. Echoing the second-wave feminism sweeping the country, it fostered the growth of more than 185 theaters, with an emphasis on women’s issues. One of these, At the Foot of the Mountain Theater in Minneapolis, made a lasting mark on the Twin Cities.

Many of the women who created these theaters were involved in the radical politics of the 1960s. They had walked in the Civil Rights and peace movements, lived in communes, and created theater events that led their audiences shouting and singing into the streets.

In the spring of 1976, a small group of actors, directors, and playwrights—lesbians, bisexuals, and straight women—met in a tiny Minneapolis apartment. They pledged to work together to transform At the Foot of the Mountain Theater, founded in 1974 by three women and three men, into a full-time, professional women’s company. They committed themselves to “honoring women’s feelings and nurturing women’s values as the source of health for our planet” and planned to produce plays by, for, and about women. They aimed to create an authentic art form from women’s experiences —a unique concept. The company described itself as a theater both “of protest” and “of celebration.”

Standing behind the banner of the second wave of the women’s movement, the theater’s founders believed that the personal is political. They shared stories from their lives and dreams for the future, then translated these testaments into movement, language, and song. This process gave an undercurrent of life to the acting style for which they became known: one that was documentary-like, with gripping realism. Committed to a nonhierarchical approach, the theater’s members worked on their plays collaboratively. They shared research duties, creating the ideas for the characters, improvising the scenes, and discussing the issues that formed the spine of the production.

As time went on, the theater’s members began to include the stories of people in the audience. They called on them to give testimony, often in the middle of a performance. They created a community of women with shared experiences who were no longer silent.

At the Foot of the Mountain moved into its permanent home in the Peoples’ Center, a multi-purpose community center, in 1979. There, the company enjoyed twelve years of success. It played to sold-out houses in the Twin Cities and earned national attention through touring productions and performances at theater festivals.

The company’s production budget, posted in the lobby, offered transparency to everyone, including the audience. A sliding scale of income-based ticket prices invited customers to choose a fair cost. An audience member who made less than $10,000 a year would pay five dollars for a ticket. Those with incomes of more than $40,000 paid fifteen dollars— a high price for avant garde theater in the 1970s. Most patrons were appreciative, supportive, and generous, and the theater never lost money.

The company’s members celebrated their political focus. An interest in the economics of power supported their organizational structure and underpinned many of their plays. For example, Raped (1976) looked at rape culture as the natural outcome of a capitalist system. Ashes, Ashes, We All Fall Down (1982) challenged Cold War policies of nuclear stockpiling. Antigone Too: Rights of Love and Defiance (1983) examined the contributions of North American women who were willing to commit civil disobedience for their beliefs. Las Gringas (1984) explicitly criticized the U.S. government’s policy in, and invasion of, Nicaragua.

Though the women’s theater movement produced a substantial body of women’s plays and rituals, it was short-lived. When At the Foot of the Mountain closed in 1991, it was the longest continuously operating women’s theater in the country. Women have since taken leadership roles in a majority of regional theaters.

Martha Boesing, a playwright, theater director, producer and performer, holds an M.A. in English literature from the University of Wisconsin. Among her many theater credits are the Minnesota Repertory Company, Moppet Players (later the Children’s Theatre), the Firehouse Theatre, Heart of the Beast Puppet Theatre in the Twin Cities. She was a founder of the Earth Family Theatre (Cambridge, Massachusetts, and Minneapolis), and worked at the Academy Theatre in Atlanta before returning to Minneapolis to co-found At the Foot of the Mountain Theater with her husband, Paul. She now lives in Oakland, California.

The short, successful life of Minneapolis’ At the Foot of the Mountain Theater