Arts & Culture
MNopedia
This content is shared with MinnPost by MNopedia, the digital encyclopedia created by the Minnesota Historical Society and supported by the Legacy Amendment’s Arts and Cultural Heritage Fund.
Feb. 13, 2017 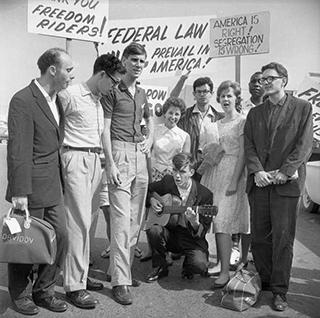 The Freedom Rides of 1961 began with thirteen riders traveling on two buses through the South. Their goal was to end race segregation in interstate bus travel. The Rides grew to over fifty journeys and other actions, and attracted 436 Riders; six of them were from Minnesota.

On June 11, 1961, six young Minnesotans took a Greyhound bus from Memphis to Jackson, Mississippi. All were white, but at the Jackson bus terminal they went straight to the waiting room marked “colored.” Police arrested them at the lunch counter inside on a charge of breach of peace. After staying in jail overnight, they were tried, convicted, fined, and sentenced to four months in jail.

They were Freedom Riders, part of the project led by the Congress of Racial Equality (CORE), the Student Non-Violent Coordinating Committee (SNCC), and the Southern Christian Leadership Conference (SCLC), to take nonviolent action against racial segregation in the South. The Freedom Rides had their origin in the Journey of Reconciliation led by CORE and Bayard Rustin in 1947. Rustin and company took a bus journey through the Upper South, disobeying Jim Crow laws and customs.

They started with an experiment: thirteen people traveling by bus from Washington, D.C. to New Orleans, May 4–17. In Alabama, that journey exploded, with the bus set afire, riders beaten, and mobs abetted by the local police. The violence did not produce the desired effect; instead, the Freedom Rides multiplied.

The Minnesota Freedom Riders were part of a second, expanded stage of the effort. Four were students at the University of Minnesota: Zev Aelony (the organizer and the one most deeply read in the theory and practice of non-violence), Claire O’Connor, Robert Baum, and Eugene Uphoff. Marvin Davidov, twenty-nine, was beginning a long career as an activist. The sixth Minnesotan was David Morton, whom Aelony called the university’s resident beatnik.

CORE had made Jackson, a crucial Southern state capital, a special target. Fourteen groups of Freedom Riders had preceded the Minnesotans to Jackson—nine by bus, five more by air and rail. All 104 of those Riders had been arrested. They were foot soldiers in a battle of attrition between Freedom Ride leadership and the State of Mississippi. The organizers hoped to overwhelm local law enforcement with numbers. In this case, the authorities answered not with violence but with process: trials, maximum sentences, jail terms, appeals bonds, and court dates.

After a few days in jail, the Minnesota men were transferred to the state penitentiary at Parchman, a prison famous for its harshness. They were held at first in maximum security, two to a six-by-nine cell, with no exercise, no visitors, and only Bibles to read. When it was hot, there was no ventilation; on cool nights the guards chilled them with fans. When they sang, the wardens took away their mattresses. Later, as more Riders were arrested, prison authorities moved them to dormitories.

O’Connor spent about two weeks in jail. She was then transferred to Parchman’s women’s section, where she endured verbal abuse and a body-cavity search. She was released on July 3, the Minnesota men on July 24. All appealed their convictions and posted appeal bonds to pursue the strategy of stressing the Mississippi justice system. To stress them back, the court in Jackson required all Riders (by now 186) to return for new trials—two a day, starting August 15. A long standoff seemed likely.

For the organizers, salvation of a sort came on September 21, 1961, when the Interstate Commerce Commission issued an order forbidding race discrimination on interstate buses and supporting facilities. This was victory; but it came from Washington, not Jackson. The Freedom Rides shifted focus to North Carolina (where Baum and Morton participated briefly) and ended in early December.

The Minnesotans got on with their lives and educations. Uphoff eventually became a physician, O’Connor a community organizer, Aelony a businessman, and Baum a University of Minnesota bus driver. Davidov continued working as a political activist. Morton, according to Davidov, became Minnesota’s first hippie.