Arts & Culture
MNopedia
This content is shared with MinnPost by MNopedia, the digital encyclopedia created by the Minnesota Historical Society and supported by the Legacy Amendment’s Arts and Cultural Heritage Fund.
March 27, 2017 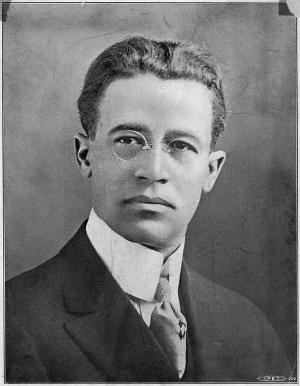 William T. Francis, Minnesota’s first African American diplomat, served as U.S. Minister and Consul to Liberia, West Africa, from 1927 until his death. He investigated and reported on Liberian government complicity in forced labor of Liberian men and died in Monrovia of yellow fever on July 15, 1929.

Born in 1869 in Indianapolis, William Trevane Francis came to St. Paul in 1887. He got a job with the Northern Pacific railway as a messenger, then a stenographer, then a clerk in the legal department. In 1901 he was named temporary chief clerk when a sudden vacancy appeared. Always ambitious, Francis enrolled in law school and got a law degree from St. Paul College of Law in 1904. He became the chief clerk in the railroad’s law department, making Francis one of the highest-ranking black employees of any Minnesota business. He practiced law for the Northern Pacific and also privately.

In private life Francis was an accomplished singer, acted in plays and musical productions (including the great “Cuba” pageant of 1898), and was a member of Pilgrim Baptist Church. In 1893 he married Nellie Griswold, another singer from Pilgrim Baptist. They often performed together.

In politics, Francis voted Republican. He ran for St. Paul city assembly in 1906 and the state legislature in 1912, losing badly both times. He admired Booker T. Washington and supported the mainstream civil rights organizations, often as an officer. He participated in the National Afro-American Council national meetings in St. Paul in 1902 and in Louisville in 1904. Though Francis faulted white Americans for the nation’s race problems, in public he took moderate positions and did not demand social equality.

In 1911 Francis lobbied President William Taft for appointment as U.S. Minister to Haiti. Though he enlisted plenty of local Republican support, the appointment went to another. When his friend and mentor Fredrick McGhee died in 1912, Francis left the Northern Pacific and took over McGhee’s St. Paul law practice. He operated a solo practice in personal injury, criminal defense, divorce, probate, and business law. When the film Birth of a Nation, admired for its artistry but deplored for its racism, came to St. Paul in 1915, Francis lobbied the city council to ban it. (In a compromise, some offensive scenes were cut.)

In 1920 Francis was appointed to the Minnesota Republican Central Committee, led the vote-for-Harding effort among black Republicans in the western half of the United States, and served as a presidential elector. In 1925 he and Nellie bought a house in an all-white neighborhood of St. Paul, inciting loud protests and cross burnings in their yard. They moved in just the same.

When the position of U.S. Minister to Liberia came open in 1926, Francis marshaled his many powerful Republican friends to advocate for him. On July 12, 1927, President Calvin Coolidge appointed Francis U.S. Minister and Consul to Liberia. The Francises arrived in Liberia a few months later, at the time when the Firestone Tire and Rubber Company was developing vast new rubber plantations there. The U.S. government considered Firestone’s rubber venture vital to national security and prosperity: both peace and war ran on rubber.

In 1928 Francis received an assignment from Secretary of State Henry Stimson to investigate rumors of Liberian official complicity in slavery and forced labor. Over the course of nine months, Francis conducted a confidential inquiry. He concluded that high government officials, including the president, vice president and postmaster general, had profited from supplying forced labor from Liberia to the Spanish cacao plantations on the island of Fernando Po (now Bioko Island). Thousands of young men had been taken from their villages for terms of labor service, with government officials receiving payment for each one. Many of the young men never returned.

Within days of submitting his report, Francis fell ill with yellow fever. After four weeks of intense suffering, he died in Monrovia, Liberia, on July 15, 1929. Nellie Francis returned to her city of birth, Nashville, Tennessee, where she lived until 1969. Both are buried at Greenwood Cemetery in Nashville.

Francis’s report helped force the government of Liberia to agree to a League of Nations investigation. After its publication, the president and vice president of Liberia were forced to resign.