Arts & Culture
MNopedia
This content is shared with MinnPost by MNopedia, the digital encyclopedia created by the Minnesota Historical Society and supported by the Legacy Amendment’s Arts and Cultural Heritage Fund.
March 20, 2017 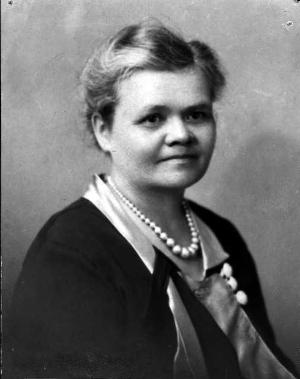 Susie Williamson Stageberg is known as the “Mother of the Farmer-Labor Party.” The Red Wing activist spent a lifetime fighting for unpopular political and social causes. She strongly opposed the merger of the Democratic and Farmer-Labor Parties in the 1940s.

Susie Williamson was born on January 30, 1877 to Ole and Kristi Williamson. She was born and grew up in Badger, Iowa near Fort Dodge. She attended Tobin College in Fort Dodge and taught at rural schools. Susie also worked as a reporter for the Fort Dodge Messenger.

At age twenty-one, Williamson married professor Olaf O. Stageberg. Olaf landed a job in Minnesota teaching at the Red Wing Seminary, and the Stagebergs moved there around 1910. Followers of Hans Hauge opened the seminary in 1879. Hauge was a forceful Norwegian lay preacher who challenged Lutheran church leaders.

Susie Stageberg made an impression at the tradition-bound Seminary. The church school began admitting women students in 1914, thanks largely to her efforts. The Stagebergs raised funds to improve educational programs.

Stageberg was active in her church and community. She supported the temperance movement and its attempt to limit alcohol use. Stageberg became president of Red Wing’s Women’s Christian Temperance Union. In 1918 Stageberg backed her husband’s campaign to become Minnesota’s governor. He ran on the ticket of the National Party, an anti-alcohol group, and lost.

Afterward, Stageberg focused on her own political career. She joined the Nonpartisan League (NPL) in 1920 when the Prohibition Party broke up. The socialist-leaning NPL worked to improve the lives of farmers. During World War I, critics attacked the group as anti-American. By joining the NPL, Stageberg showed that she was not afraid of being branded a political radical.

In the early 1920s, Fred A. Scherf of Red Wing hired Stageberg to edit his newspaper, The Organized Farmer. She used the weekly paper to criticize business and government policies that she felt harmed farmers. Stageberg also wrote a column, “As a Woman Sees It,” for the Minnesota Leader. She served as executive secretary of the Women’s Nonpartisan Clubs of Minnesota from 1922 to 1925.

In 1922, Stageberg gave a speech that earned her the title “Mother of the Farmer-Labor Party.” She and other NPL leaders teamed with members of the Minnesota Federation of Labor. They wanted to form a Farmer-Labor (F-L) Party. This party would unite farmer interests with labor interests. Stageberg’s speech at the important meeting created support for the political union.

The Farmer-Labor Party nominated Stageberg to run for Secretary of State in 1922, 1924, and 1928. She was unsuccessful. The F-L had little success with voters until the Great Depression. During the mid-1920s, their candidates usually finished ahead of Democrats but behind Republicans in statewide elections.

By 1944, Farmer-Labor and Democratic leaders were talking about uniting to combat Republican dominance in Minnesota. Stageberg was one of only two leaders who opposed the merger, and actively fought against it. She thought the move would weaken the socialist wing of the new party. F-L governor Elmer A. Benson went along with the alliance, but he later regretted it. He said Stageberg had been right. The Democratic-Farmer-Labor (DFL) party came into being in April 1944.

By 1950 Susie Stageberg was fed up with DFL leadership and resigned as Goodhue County party secretary. She claimed, “Wall Street monopolists and professional militarists” ran the DFL. The feisty seventy-three year-old wrote, “We were called ‘Red Bolsheviks’ and ‘Free Lovers’ in the twenties. We must dare to be called ‘Communists’ now.” That year she ran for lieutenant governor on the Progressive party ticket. She lost.