Arts & Culture
MNopedia
This content is shared with MinnPost by MNopedia, the digital encyclopedia created by the Minnesota Historical Society and supported by the Legacy Amendment’s Arts and Cultural Heritage Fund.
April 9, 2018 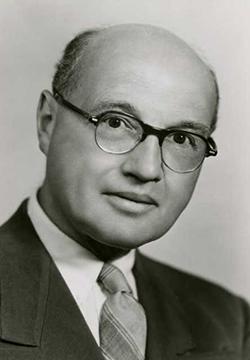 Izaak “Piet” Kolthoff was born in Almelo, the Netherlands, in 1894 and received a rigorous education there. He took an intense interest in chemistry at an early age and specialized in analytical chemistry (the science of identifying and measuring chemical compounds) at the University of Utrecht. He published his first scientific paper at age twenty-one and got his PhD at twenty-four.

In 1927 Dean Samuel Lind of the University of Minnesota’s Institute of Technology―himself a distinguished chemist―recruited Kolthoff to build an analytical chemistry program there. Kolthoff set about the task with determined energy. He wrote, he published, he taught, and he recruited a succession of graduate students who went on to important careers at major universities all over the United States. His work at Minnesota was part of an even bigger personal project―the modernization and elevation of analytical chemistry from what it had been, a collection of laboratory techniques, to a major branch of chemistry, equal in stature to biochemistry and the physical, organic, and inorganic branches.

During World War II the War Department recruited Kolthoff as part of a “second Manhattan Project” to meet the nation’s critical need for rubber. The Japanese controlled the world’s supply of natural rubber, and production of synthetic rubber amounted to only a few hundred tons a year. Kolthoff turned the University of Minnesota into a research center in that successful effort. By war’s end the United States produced some 920,000 tons a year, using a “cold rubber” recipe to which Kolthoff made vital contributions. The recipe permitted mass production of a rubber as good as or better than natural rubber, using less energy. America’s post-war rubber production was based on that recipe.

Kolthoff had an intense personal interest in an Allied victory in World War II. During the war he lost contact with his family, Jews trapped in the Nazi-controlled Netherlands. Only in 1945 did he learn the truth: almost all, including his mother, were murdered by the Nazis. Only a brother survived.

In politics, Kolthoff was a committed internationalist and believer in international cooperation and academic freedom. After the war he traveled extensively in the Soviet bloc and maintained relationships with scientists there. The FBI investigated him and in 1951 the House Committee on Un-American Activities named him―along with Paul Robeson, Albert Einstein, Leonard Bernstein, Linus Pauling, and many other distinguished citizens―a subversive for his association with six civil rights and world peace organizations. In response, Kolthoff wrote to the committee chair telling him the committee had missed three more organizations he belonged to. He briefly lost his security clearance but never his stature as a scholar or the support of the University of Minnesota.

In the mid-1950s Kolthoff undertook a project of daunting scope: a comprehensive treatise of modern analytical chemistry. The result, thirty volumes published over twenty-eight years, engaged 295 authors and ran to 17,000 pages. His Treatise on Analytical Chemistry cemented his reputation as the father of modern analytical chemistry. He had a motto: Theory guides, experiment decides.

Izaak Kolthoff never married, and from 1927 until shortly before his death he lived on the university’s Minneapolis campus, first in Coffman Union, later in Comstock Hall. He was an avid athlete in tennis, swimming, and horseback riding, and a fearsome bridge player.

Kolthoff received almost every major award in chemistry short of the Nobel Prize: the Nichols Medal (1949), the Fischer Award (1950), the Willard Gibbs Award (1964), and, in 1967, the Kolthoff Gold Medal Award in Analytical Chemistry. In 1972 the University named its new chemistry building on Northrup Mall Kolthoff Hall. In 2014 the American Chemical Association designated Kolthoff and modern analytical chemistry a national chemical landmark.

All about chemistry: The remarkable career of the University of Minnesota’s Izaak Kolthoff