Arts & Culture
MNopedia
This content is shared with MinnPost by MNopedia, the digital encyclopedia created by the Minnesota Historical Society and supported by the Legacy Amendment’s Arts and Cultural Heritage Fund.
April 2, 2018 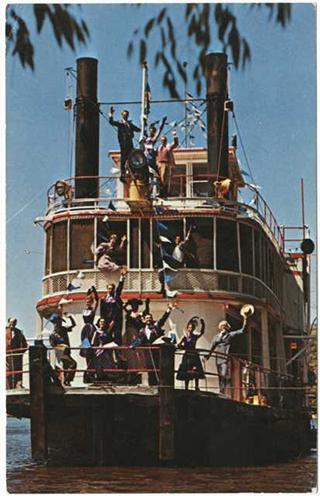 Courtesy of the Minnesota Historical Society
Minnesota Centennial Showboat and performers, 1965. Photograph by the University of Minnesota Photographic Laboratory.

University of Minnesota professor Frank M. “Doc” Whiting brought a unique type of theater entertainment to the Twin Cities with the opening of the Minnesota Centennial Showboat in 1958. For more than fifty years the showboat presented a variety of student theater productions, from melodrama to Shakespeare, in a floating venue on the Mississippi River.

In 1956, the Minnesota Centennial Commission began to plan for the 1958 state centennial celebration. Frank Whiting, director of the university’s theater program, saw an opportunity to realize his dream of a showboat theater on the Mississippi. He proposed a Minnesota Centennial Showboat. The commission agreed, and the search began for a suitable boat.

Finding a paddleboat wasn’t easy, and building one on an existing river barge proved too costly. In 1957, Whiting and the Centennial Commission’s Tom Swain learned that the US Army Corps of Engineers planned to retire the General John Newton, a 175-foot sternwheeler towboat built in 1899. Minnesota Senator Edward J. Thye helped to arrange its transfer to the university for just one dollar.

The paddleboat arrived in St. Paul on April 3, 1958. The university had less than three months to prepare it for the season opening on June 26. Students helped to recreate the atmosphere of an 1890s showboat by painting walls, sewing curtains, reupholstering old theater seats, building scenery, and sewing costumes.

The first season opened with a production of Augustin Daly’s 1867 melodrama Under the Gaslight. Miss Minnesota Diane Albers, assisted by Doc Whiting and Centennial Commission Chairman Peter Popovich, christened the boat by breaking a bottle of champagne across the bow. James S. Lombard of the commission’s arts committee cut the ribbon to open the gangplank. Mayor Joseph E. Dillon of St. Paul rang the ship’s original bell to invite the theater’s first patrons aboard.

In its early years, the showboat traveled up and down the river. It stopped for scheduled performances in Minneapolis, St. Paul, Stillwater, Hastings, Red Wing, Wabasha, and Winona. The student cast, numbering about fifteen, performed one or two plays each season. Each show featured vaudeville-style olios (lively song-and-dance numbers) between acts. In addition to performing, the actors cleaned the boat, greeted visitors, and took tickets, among other tasks.

1969 marked the last season the boat toured. Following that season, it made an appearance in the Swedish film The Emigrants before settling into a stationary mooring site on the river’s east bank, below the university campus.

In 1995, the ninety-six-year-old paddleboat moved to St. Paul for $2 million in needed repairs. Fire destroyed the boat on the evening of January 27, 2000, just months before its scheduled reopening on Harriet Island. Only the paddlewheel and burned-out hull remained.

University theater professor C. Lance Brockman led a campaign to obtain a new showboat. In December 2000, the university agreed to a partnership with the City of St. Paul, the St. Paul Riverfront Development Corporation, and the Padelford Packet Boat Company to build a new showboat. Construction began the following spring in Greenville, Mississippi.

Christened the Frank M. Whiting, the new Minnesota Centennial Showboat arrived at Harriet Island on April 17, 2002. It opened on July 4 with a production of Dr. Jekyll and Mr. Hyde.

The Minnesota Centennial Showboat exposed students to a unique type of theater. Student actors embraced the over-the-top style of melodrama. Designers and student crews met the challenges presented by a small performance space. Audiences joined the fun by booing and hissing at the villain and applauding the hero.

The showboat program earned the Tourism Partner of the Year Award from the St. Paul Convention and Visitors Bureau in 2004. The Padelford Packet Boat Company joined the university’s Department of Theatre Arts & Dance to create the C. Lance Brockman Showboat Scholarship later that year.

The final curtain came down on the Minnesota Centennial Showboat at the end of the 2016 summer season. The university’s fifteen-year agreement with the City of St. Paul expired, and the university cut the program for budget reasons. Fittingly, the final season featured a revival of Under the Gaslight.

The university sold the boat to the City of St. Paul for one dollar. As of 2018, future plans for the showboat are pending a new management agreement.