Arts & Culture
MNopedia
This content is shared with MinnPost by MNopedia, the digital encyclopedia created by the Minnesota Historical Society and supported by the Legacy Amendment’s Arts and Cultural Heritage Fund.
April 23, 2018

In the fall of 1925, a series of six signs advertising Burma-Shave, a new brushless shaving cream, appeared for the first time along highway 65 from Minneapolis to Albert Lea and on highway 61 to Red Wing. The signs began an advertising phenomenon using clever rhyming jingles that lasted into the 1960s, including: “Your shaving brush / has had its day, / so why not / shave the modern way / with Burma-Shave?”

In the early 1900s, Robert Odell, a Minneapolis attorney, was seeking a second source of income. He decided to manufacture an aromatic liniment, which he named Burma-Vita. He chose “Burma,” which was the source of the liniment’s ingredients (cassia, camphor, and cajeput), and vita, which is Latin for life. Odell promoted it as a remedy for aches and pains, burns, wounds and sores, skin irritations and rashes, and other ailments.

In 1925, the Burma-Vita company was in dire financial straits. Robert’s son, Clinton, had the idea to develop a brushless shaving product for men from the liniment. This new product would eliminate the need for a shaving brush, which often became moldy and smelly when stored in a shaving kit. Burma-Shave was born after months of experimentation by Carl Noren, a Minneapolis chemist. In 1926, a newspaper advertisement encouraged enlightened young men to use Burma-Shave to shorten the time they spent on shaving. A half-pound jar cost fifty cents, and a big tube was thirty-five cents.

Sales of the new product were slow until Allan Odell, Clinton’s son, decided to take advantage of the increase in car ownership and travel. He convinced his father to invest 200 dollars to create signs to advertise Burma-Shave along the roadside. One line of a non-rhyming jingle was painted on each of six boards, which were spaced one hundred feet apart on the roadside. By 1927, business increased to $68,000 in one year. By the late 1930s, Burma-Shave became the second-highest-selling brushless shaving cream in the US and was in 17 percent of medicine cabinets.

Soon shorter, rhyming jingles appeared on the signs that motorists could more easily read as they passed by. Many of the jingles were early public service announcements—“Drive / with care. / Be alive / when you/ arrive. / Burma-Shave.” Eventually, the signs were installed in forty-five states, and over 6,000 sets were installed in thirty-three years. 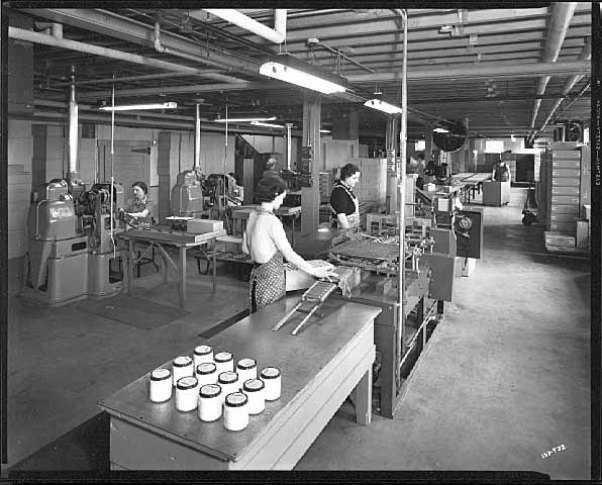 Courtesy of the Minnesota Historical Society
Women working on the assembly line inside the Burma-Vita Company, 2318 Chestnut Avenue West, Minneapolis. Photograph by Norton & Peel, May 9, 1941.

Initially, the Burma-Vita company was located at 2533 Hennepin Avenue in Minneapolis. In 1926, the company leased a building at 2005 East Lake Street in Minneapolis. With 17,000 square feet and four stories, the building accommodated modern machinery used to mix the shaving cream and to fill and label jars and tubes. Projected production was two tons per day. In 1940, the company moved once again to 2318 West Chestnut Avenue in Minneapolis. It never employed more than thirty-five employees, who worked in either sign or shaving-cream production.

In the early years, Allan and Clinton Odell wrote most of the product’s jingles. In 1930, they realized their jingle-writing creativity was limited, so they created a yearly, national jingle-writing contest. In 1951, prizes ranged from two to 100 dollars.

Contest rules required that the jingle words fit on a series of six signs, and the last sign had to read Burma-Shave. Each jingle had to rhyme and fit into one of six categories—Safe Driving; Humor; Brushless; Economy; Tough Beards, Tender Skin; and Avoid Substitutes. The top or bottom flap of a Burma-Shave carton had to be included with the submission. Over 50,000 entries were received in some years. The Odells were careful not to use potentially offensive jingles.

During World War II, gasoline and tire shortages limited sign maintenance, and sales dropped since there were fewer vehicles on roadways. With the beginning of the interstate highway system in the 1950s, the signs lost their advertising effectiveness since they had to be installed farther from roads. At the same time, driving speeds increased, making signs harder to read. New laws regulating highway billboards and changing times led to the eventual demise of the signs, and thus declining sales. In 1963, the Burma-Vita company was sold to Philip Morris, which began removing the signs. In 1966, the manufacturing operations moved to New Jersey and production discontinued soon after.

Mary Laine is a volunteer for the Minnesota Historical Society. She has master’s degrees in horticulture and medical technology and is a blood-bank specialist. She has been a history buff ever since she took a Minnesota history class in grade school.