Arts & Culture
MNopedia
This content is shared with MinnPost by MNopedia, the digital encyclopedia created by the Minnesota Historical Society and supported by the Legacy Amendment’s Arts and Cultural Heritage Fund.
June 18, 2018 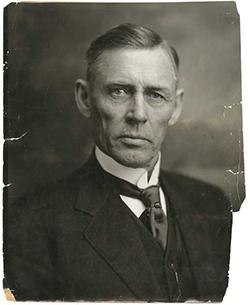 Courtesy of the Minnesota Historical Society
Charles A. Lindbergh Sr. ca. 1918, the year in which he ran for governor as the Nonpartisan League’s nominee.

Charles August (C. A.) Lindbergh, father of the aviator Charles Augustus Lindbergh, was a Little Falls lawyer who represented Minnesota’s Sixth District in the United States Congress for five terms. He was a leader of the progressive wing of the Republican Party and opposed the United States’ entry into World War I. As the nominee of the Nonpartisan League, he waged an unsuccessful campaign to unseat Governor Joseph Burnquist in the bitterly fought 1918 gubernatorial Republican primary.

A few months after Lindbergh was born in Sweden in 1859, his parents immigrated to Minnesota, where they settled near Melrose in Stearns County. His father, a former member of the Swedish parliament and a liberal reformer, held several local offices in Melrose and helped organize the town’s first school. Young C. A. Lindbergh attended this school and, later, a nearby preparatory school.

In 1881, Lindbergh entered the law school at the University of Michigan. When he graduated in 1883, he set up a law practice in Little Falls. He soon had an impressive list of commercial clients, including local banks and Frederick Weyerhaeuser’s nearby lumber operations.

In 1887, Lindbergh married Mary LaFond. The couple had three daughters, one of whom died in infancy. In 1898, Mary died after unsuccessful surgery; in 1901, Lindbergh married Evangeline Lodge Land, with whom he had one son: Charles Augustus, the future aviator. The Lindberghs then built a large home on the Mississippi River. When that house burned down in 1905, they built a smaller home (designated a National Historic Landmark in 1976). At about that time, the Lindberghs separated, although they remained close and never divorced.

Except for one term as Morrison County Attorney, Lindbergh did not seek public office until 1906, when he campaigned for the Republican nomination for Sixth District Congressman. Identifying himself as a progressive, he beat the incumbent and went on to win the seat in the general election. He successfully held his seat in the 1908, 1910, 1912, and 1914 elections. In Congress, he sided with the “insurgent,” or progressive, Republicans against the “stand pat,” business-oriented faction. He was best known as a critic of the “money trust,” the big Wall Street financiers led by J. P. Morgan, and as a reformer who sought to bring banking under democratic control.

When World War I broke out in 1914, Lindbergh vocally opposed United States involvement. He argued that only the bankers and other “war profiteers” would benefit from a war with Germany. In 1916 he supported the Gore–McLemore resolution, which responded to German submarine warfare by urging Americans to avoid booking passage on the armed vessels of belligerent nations.

In 1916, Lindbergh chose not to defend his House seat in order to pursue an unsuccessful run for senator. Shortly before his term ended in March 1917, he was part of a small minority that voted against arming US merchant vessels. After the US declared war on Germany, he published Why Is Your Country at War — a book in which he blamed the “inner circle” of the most wealthy for pushing the nation into the conflict.

The legislature created the Minnesota Commission of Public Safety (MCPS) in April to govern the state for the duration of the war. It included Governor Burnquist, the attorney general, and five other men, mainly conservative business leaders. John F. McGee emerged as the dominant force, and under his leadership, the commission demanded “100 percent loyalty” and classified any criticism as treasonous.

Meanwhile, the Nonpartisan League began a major drive to elect its candidates in the 1918 elections. Lindbergh became the league’s candidate in the Republican primary against Governor Burnquist. The MCPS branded the NPL as “disloyal” and encouraged local Home Guard units and county sheriffs to disrupt the Lindbergh campaign. Lindbergh was hung in effigy, barred from speaking, pelted with rotten eggs, shot at, and briefly jailed. Although Lindbergh carried thirty counties, Burnquist won, with 199,326 votes to Lindbergh’s 150,626.

Greg Gaut is emeritus faculty at Saint Mary’s University in Winona, where he taught European and Russian history. Since 2012, he has worked as a historic preservation consultant. He and his wife, Marsha Neff, have contributed several articles to Minnesota History, two of which won the David Gebhard Award for the best article on Minnesota’s built environment.

Before his aviator son made the Lindbergh name famous, Charles A. Lindbergh, Sr. was a prominent Minnesota politician