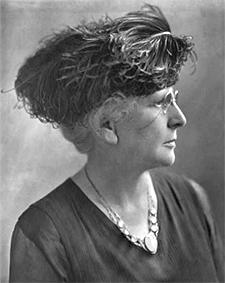 Clara Hampson Ueland was born in 1860 in Akron, Ohio. In 1869, she moved to Minnesota with her family, eventually settling in Minneapolis. She worked there as a schoolteacher before marrying Andreas Ueland, a prominent Norwegian American lawyer, in 1885. The two went on to have eight children, including writer Brenda Ueland. Many of the Ueland children shared their mother’s dedication to gender equality and activism.

Ueland spent much of the 1880s and 1890s raising her children, but her interest in feminism and community advocacy was apparent throughout. In 1892, she campaigned for women to serve on the Minneapolis School Board and established several free kindergartens in the city. She also displayed her feminist beliefs at home, breaking gender norms by teaching her sons to do housework and encouraging her daughters to go to college.

As women’s organizations gained momentum around the turn of the twentieth century, Ueland became serious about the suffrage movement. Her interest was piqued by a Minneapolis suffrage convention in 1901. Soon after, Ueland joined two organizations in support of the cause. She even went on to help found the Woman’s Club of Minneapolis, but left in 1912 to focus her energy on women’s voting rights.

Ueland’s determination and leadership skills quickly pulled her from the periphery to the center of Minnesota’s suffrage movement. In 1913, she founded the Equal Suffrage Organization of Minneapolis, notable for its male as well as female members. The following year, she organized a suffrage parade in Minneapolis with a turnout of nearly 2,000 marchers. Its success propelled her to her most significant leadership role as the president of the Minnesota Woman Suffrage Association (MWSA).

As MWSA president, Ueland launched a whirlwind effort to gain support for women’s suffrage. Her leadership style was relatively conservative, and she prized order and restraint over the more radical methods of other organizations. She prioritized outreach outside of the Twin Cities, mailing regular “Dear Suffragist” letters to suffrage leaders statewide and visiting outlying towns to give speeches. Ueland also organized a group of women to call directly on policy makers for change. Praising her leadership, a fellow suffragist referred to her as “the Moses who is leading Minnesota to the promised land.”

Ueland’s efforts finally paid off in 1919 when the nineteenth amendment was passed by Congress. She celebrated with almost fifty other Minnesotan women at a 1920 victory convention in Chicago. She attended the first national congress of the League of Women Voters on the same trip, and soon assumed leadership of the League’s Minnesota branch.

Although Ueland retired from the presidential position soon afterwards, she continued to work closely with the League as head of its legislative council. Ueland had always been quick to note that her suffrage work focused not only on increased rights for women, but also on the good women could do with their votes. She stuck to these words. As leader of a 1922 campaign to pass a child labor amendment, Ueland pushed through repeated failures in an attempt to secure protections for children. She also worked with the League to elect women into office, support workers and mothers, and promote peace between nations.

Ueland remained an activist until the day she died in 1927. After a day of campaigning for stricter child labor laws at the State Capitol in St. Paul, she was hit by a truck near her home. She died almost immediately, her death prompting many to remember the strides she had made for women’s rights. The following year, a plaque was installed in her honor at the Capitol.

Elizabeth Loetscher is a student at Macalester College, where she studies English. She was a MNopedia intern in 2018. For more information on this topic, check out the original entry on MNopedia.

Elizabeth Loetscher is a student at Macalester College, where she studies English. She was a MNopedia intern in 2018.