Arts & Culture
MNopedia
This content is shared with MinnPost by MNopedia, the digital encyclopedia created by the Minnesota Historical Society and supported by the Legacy Amendment’s Arts and Cultural Heritage Fund.
Aug. 27, 2018 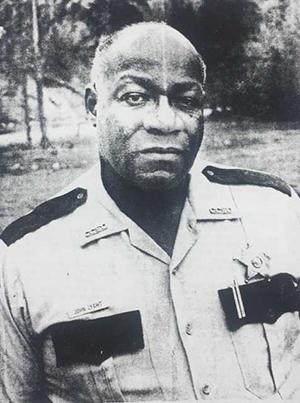 John Lyght, Minnesota’s first African American sheriff, faced different challenges than his constituents as one of the only African Americans in Cook County. A reputation for fairness, however, won him multiple re-elections with wide support between 1972 and 1994.

In 1913, growing tired of giving his whole paycheck to a West Pennsylvania coal mine’s company store, John’s father, Hosey, moved with his wife, Stella, and their children to one of the few remaining Homestead Act properties in Minnesota. The site of their future home included 160 forested acres and a small hunting shack, just inland from the town of Lutsen, on Lake Superior.

Many in Lutsen related to the situation Hosey and Stella faced as young “homesteaders” unused to the isolation and harsh winters of Northern Minnesota. Nevertheless, the family faced intolerance; many in the county had never seen an African American person before. While hunting without a license was common, John’s older brother Norman later recalled that his father seemed to be the only one ever arrested for it. When some of his neighbors threatened to torch his new house, Hosey told them that he would be waiting at home, armed, if they tried. They never did.

In 1925, Hosey used savings from working on road construction crews and in lumber camps to open a fishing resort aptly named “Northern Lights.” The business was successful, and the Lyghts met many African American families from Duluth and the Twin Cities coming for the North’s only African-American-owned resort. Through their success, the Lyghts became a respected family in the county. Hosey became a member of the Cook County school board only a few years after fighting for his children to be allowed to ride the same school bus as white children.

John spent his childhood years working at Northern Lights, serving as a fishing guide, and cleaning the cabins. When the Great Depression pushed vacations out of reach for most, extra money was needed to help the family of fifteen survive. John worked odd jobs in Duluth when he was only twelve; his older brothers and father found work through New Deal public works agencies.

When his father died in 1944, John left high school to help support his family, as the resort business had folded. He spent a year in the Air Force and then joined his brothers to start Lyght Brothers, a trucking company. John regretted not finishing high school and furthered his education through correspondence courses.

John eventually left Lyght Brothers to become the caretaker of a private resort, spending the “off seasons” driving school buses, hauling lumber, and even selling lift tickets and serving as a bouncer for dances at the Lutsen Resort. It was through this last gig that Lyght chanced upon a career in law enforcement. The Cook County Sheriff’s Department did not have the resources to deal with the dances and hired Lyght as a part-time deputy in 1968. When the sheriff retired in 1972, John was chosen out of six candidates to replace him.

Lyght later noted that the main challenges he faced as sheriff stemmed from the isolation of his county’s permanent residents. Like his parents, many of the county’s families had chosen to live in Cook County because it offered more freedom than heavily populated areas; they were used to resolving disputes without law enforcement. This frontier mentality was exacerbated by a lack of funding; John had only one deputy to help him oversee almost 1,500 square miles for his first term.

In spite of limited resources, John quickly made his mark on the county through his reputation for being firm yet fair in his work and genuinely concerned for the well-being of his constituents. Steve Elam, a retired police officer in Silver Bay, recalled an occasion when John picked up someone his office had arrested from Cook County: “The kid told John that he was going to plead guilty because…John didn’t arrest people who weren’t guilty.”

While Lyght secured re-election after re-election through strong relationships with the people of Cook County, he always thought his department could improve. Starting in the early 1980s, he advocated for an increased budget with the county board to bring on more officers and a dispatcher.

Sam Meshbesher is assistant editor of MNopedia at the Minnesota Historical Society. He has a bachelor’s degree in history from St. Olaf College.