The thing about caucuses is you really have to be there. Or at least you did, under old Iowa caucus rules that required caucusgoers to show up in person at their local precincts at 7 p.m. on one specific night in the dead of winter in order to have their presidential preference count.

The hassle of that is one reason caucuses have fallen out of favor with many states, including Minnesota, which switched away from a caucus to a presidential primary after the 2016 election.

But not Iowa. Still, this year, the Iowa Democratic Party made it easier to participate from beyond Iowa’s borders, putting on 96 satellite caucuses around the country and the world in order to allow members of the Iowa diaspora to caucus without physically being in the state.

Some were as near as Cedar Rapids, in eastern Iowa, where Coe College students from other parts of the Iowa could go instead of trekking home. Others are spread across the U.S. and even around the world. Iowans in France, the Republic of Georgia and Scotland could caucus from far-flung satellite locations. Two were held — one in St. Paul and one in Northfield — a little closer to home, in Minnesota.

Your own private Iowa

In the minutes before the caucus was slated to start at 7 p.m., the Iowans trickled in. They sorted themselves according to the candidates they supported; names printed and taped on the walls.

Will Myers, of Des Moines, one of a small number of Amy Klobuchar supporters in attendance, said he caucused for Bernie Sanders at his first caucus in 2016. This year, Klobuchar was his first choice.

Catherine Collins, a sophomore at Macalester College, was relieved to learn of a satellite caucus close to campus. She said she has the roughly five-hour drive home to Iowa City and back down to a science, but it wouldn’t have been feasible on a Monday night on top of school.

She said she went back and forth on whether to support Bernie Sanders or Elizabeth Warren,  but ultimately settled on Warren.

“I’m far left, but I’m not quite that far left,” she said of her choice. When it comes to specifics, Collins said she appreciates Warren’s economic policies, like her anti-corruption plan, and the candidate’s plan for child care, which she wrote a school paper on last year.

Pete Buttigieg supporter Eric Romano showed up to the St. Paul Iowa caucus wearing a shirt that said “Give Pete a Chance.” He and his boyfriend recently moved to Minnesota from Iowa City and hadn’t changed their voter registration yet.

Romano said he saw each of the candidates speak at rallies or stump speeches while living in Iowa. But he decided on Buttigieg last fall.

“They’re all great, but when you connect with a person, you connect,” he said. “The way Pete communicates with his audience, he’s so smart, intellectual, just compassionate and wants to do better for the people.”

When it came time to get started, caucus leader Ben Popken, a University of Minnesota student from Ames, and an Andrew Yang supporter, read a statement from Iowa Democratic Party Chair Troy Price.

Laughter erupted from the group — many, if not most of them college students — when Price’s statement sought donations in the amount of $46 in honor of the 46th president they were caucusing to elect this year.

Under Iowa caucus rules, candidates must have the support of 15 percent of attendees in order to be considered viable and win delegates.

Only Buttigieg, Klobuchar, Sanders, Warren and Yang had any first-choice supporters at the St. Paul caucus Monday, but Buttigieg, with four supporters, and Klobuchar, with two, were knocked out when they didn’t meet the threshold for viability. Because they didn’t reach 15 percent, Buttigieg and Klobuchar’s supporters were allowed to cross the room to join another group or combine to make one of their candidates viable, a process called realignment.

With Klobuchar out of the running, Myers found his way to the Sanders group. “He’s always been my second choice,” he said after the caucus. “It’s really rare that you see a leader like that who’s always been committed to the same things over time.” 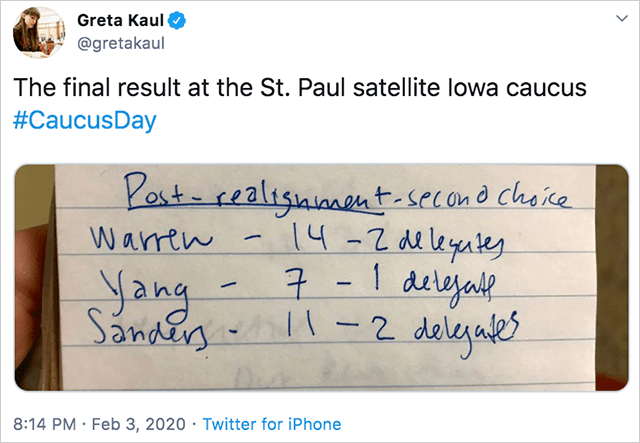 When all was said and done, Warren had 14 supporters, Sanders had 11 and Yang had seven of the 32 attendees: that’s two delegate equivalents for Warren and Sanders each and one for Yang. Those numbers will figure into the real delegate count in the presidential nominating process in Iowa and beyond.