In 1998, when John Keller joined the St. Paul-based Immigrant Law Center of Minnesota (ILCM) as an immigration attorney, he would often drive to Worthington, where hundreds of low-income immigrants and refugees depended on the organization’s free legal services.

“We would do workshops, answer a bunch of questions, do in-takes and represent whoever we could help,” said Keller.

Then one day in 2006, a year after he was named ILMC’s executive director, federal immigration agents raided a meatpacking plant in the southern Minnesota city, picking up more than 200 workers — an incident that frightened foreign-born residents in the area.

To effectively respond to the raids, Keller needed to hire a full-time attorney, increase staff presence in the city and take on more legal cases to help detainees and their families. But doing so without a physical location in the city proved difficult for Keller and his team.

So in 2009, the organization opened its first satellite office in Worthington, a city that has rapidly diversified over the last two decades, largely because of immigrant population growth.

Six years later, ILCM opened an office in Moorhead and then, in 2016, a third one in Austin — cities that have also seen an influx of immigrants and refugees, many of whom face substantial challenges in starting a new life in a foreign land.

Yet ILCM is hardly alone in its efforts to expand services for immigrant and refugee services to Greater Minnesota. Over the last several years, several Twin Cities-based nonprofit organizations have also branched out to serve foreign-born residents in various cities and towns across Minnesota. Those organizations include the African Development Center (ADC), which took its services to Willmar and Rochester 2011 and the Karen Organization of Minnesota (KOM), which created an office in Marshall in 2014.

Now another Twin Cities-based nonprofit, Ka Joog, which serves Somali-American youth, is planning to open a satellite office in St. Cloud, where the organization will create projects that are aimed at connecting immigrants to meaningful jobs and enhancing tolerance and understanding between white residents and black refugees in Central Minnesota.

“We see members of the immigrant community moving from the Twin Cities into communities in Greater Minnesota,” said Mohamed Farah, co-founder and executive director of Ka Joog. “We have to change the way that we serve these communities; we have to go with them and serve them wherever they are.”

Minnesota is now home to more than 450,000 foreign-born residents — or about 8 percent of the state’s population — many of whom escaped violence and economic turmoil in East-Africa, Southeast Asia, Central America and other parts of the world.

For nearly three decades, the state’s immigrant and refugee communities have been concentrated in certain neighborhoods in Minneapolis and St. Paul or in nearby suburbs. And taken together, foreign-born residents in the Twin Cities metro area still make up 80 percent of the state’s immigrant community, according to a 2016 report by Minnesota Compass, a research project of the Wilder Foundation.

Yet a growing number of immigrants and refugees have come to call Greater Minnesota home, especially in towns like Marshall, Worthington, Owatonna, Faribault, Willmar and St. Cloud. In fact, as Wilder Foundation Execuitve Director Paul Mattessich told the Star Tribune, 14 percent of Somali, 30 percent of Mexican and 34 percent of Korean immigrants live in Greater Minnesota. 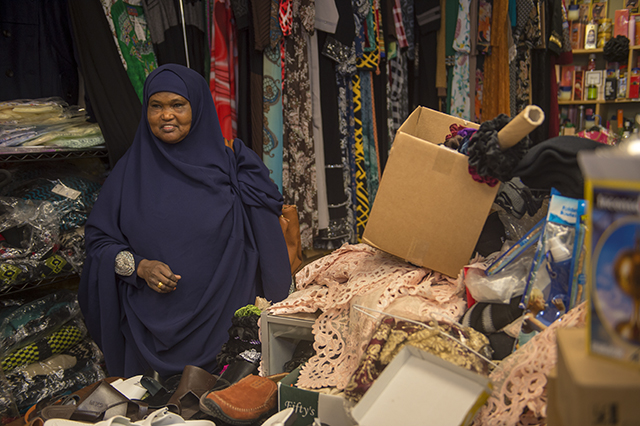 MinnPost photo by Craig Lassig
Sofia Ahmed in her shop, Guled Merchandise, in Willmar, one of the businesses that has received a loan from the African Development Center.

Though there’s little hard data to quantify the exact reasons, nonprofit leaders working in these communities often hear three rationales among those who move there: access to low-skill jobs, affordable housing and the desire to live in a place similar to where they left. “A lot of our immigrant and refugee folks come from smaller towns and rural communities,” said the ILCM’s Keller. “It’s not true in everyone’s case, but there’s a little bit more comfort sometimes for people to live in places that aren’t as crazy as the Twin Cities.”

Looking beyond the metro

That growth has also created a demand for services in Greater Minnesota, especially those that benefit low-income immigrants and refugees. One of the services ILCM provides, for instance, is advocacy. The center partners with state and local government agencies as well as community leaders and labor unions to help shape policies that support immigrant and refugee communities.

ILCM also holds regular educational sessions for immigrants, elected officials, law enforcement and others, updating participants about pending changes in immigration policies and educating them about their rights.

In addition, the organization provides low-income immigrants with in-person consultation, legal representation and culturally appropriate information. ILCM not only offers those services to residents who live in Worthington, Moorhead and Austin — where the organization has offices — but it also gets those services to a number of residents in other parts of Greater Minnesota, including Willmar, St. James, Marshall, Mankato, Owatonna and Albert Lea.

Today, ILCM’s clients in the region make up 25-30 percent of the 4,500 clients the organization services annually — a number that Keller says will only grow in the years to come. “We know how life-changing getting access to understanding the law and legal representation to move through the law is,” Keller said. “We really want to try to make it as fair as possible for people to access our services, and not be disadvantaged by the fact that they live outside of the metro area.”

Like ILCM, the Minneapolis-based African Development Center has also opened satellite offices in Willmar and Rochester to assist foreign-born residents across Greater Minnesota. “Those are the areas that we were going back and forth like crazy,” said ADC Executive Director Nasibu Savera. “Then we realized that the two offices should be able to provide our services to other areas,” such as St. Cloud, Marshall, Owatonna and Faribault.

ADC provides several programs for immigrant and refugees, including classes to help first-time homebuyers navigate the banking system and improve their credit. The organization also lends entrepreneurs money to start and maintain businesses. In 2017 alone, ADC offered financial counseling and homestretch workshops to more than 250 immigrant homebuyers and entrepreneurs in Greater Minnesota. In that same year, the organization financed 17 small businesses, giving out $330,000 in loans.

Like ADC, the Karen Organization of Minnesota, which was established in St. Paul a decade ago, also recently branched out to Greater Minnesota, mostly to work with Burmese immigrants and refugees.

The need to expand its services became apparent around 2010 when KOM leaders noticed that more and more refugees — most of them men — from the Twin Cities were traveling to Marshall for jobs at the meatpacking companies and then traveling back their family for the weekend. “They would drive down to Marshall, rent an apartment together for the week while they worked and then drive back home over the weekend,” said KOM Co-executive Director Alexis Walstad. “That’s not the ideal situation for anyone, not for the families or the city, which of course wants to see people move there.” 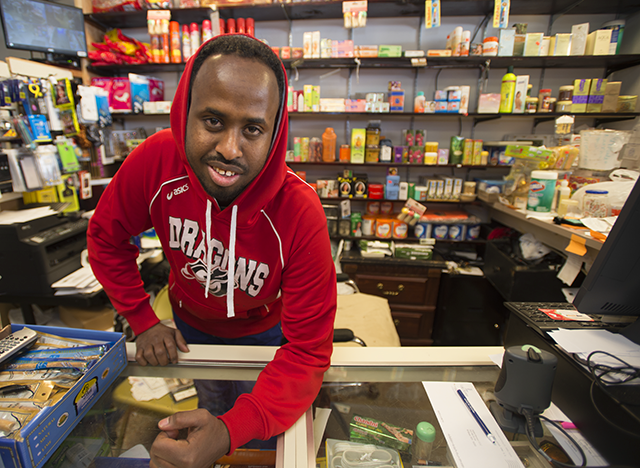 MinnPost photo by Craig Lassig
Abdiweli Yusuf received a loan from the African Development Center to expand his grocery store in Willmar.

One of the main reasons the men were making the arduous commute to and from Marshall was because there wasn’t an established Karen community there, and they wanted to keep their family in the Twin Cities, where they could find social services tailored to their children and wives.

So in 2014, KOM opened an office in Marshall in the hopes of helping to establish a community there, creating programs that would connect Karen to housing opportunities, English language schools, employment training programs, citizenship classes and other services. Now the organization also connects newcomers to housing assistance, health care and food support, while at the same time helping them to become financially independent and encouraging them to obtain green cards and become citizens.

Today, more than 650 Karen people call Marshall home, and at least a dozen of them have purchased homes through KOM’s partnership with the Southwest Minnesota Housing Partnership. “People are seeing Marshall as more of a long-term location,” Walstad said. “And city leaders are starting to understand more about the Karen population and how they can make the city a welcoming place.”

The leaders of Ka Joog are hoping to replicated such successes. For the last several years — like those at the ILCM, ADC and KOM before them — they have been traveling back and forth to several cities in Greater Minnesota, taking the organization’s art and cultural programs to Moorhead, Worthington, Rochester, Faribault, Willmar and St. Cloud “to build relationship and trust” among Somalis and other communities there.

In a few months, Ka Joog will have a permanent space in St. Cloud to connect young Somalis to employment opportunities and engage other residents through plays, spoken word performances and community events.