In recent years, Said Garaad has seen an increasing number of Somali-Americans in Minnesota who are choosing careers in education.

Most of those joining the field are young people who grew up in Minnesota and received their first taste of education in urban classrooms filled with immigrants and refugees learning the English language, said Garaad, School Success Program Assistant at Minneapolis Public Schools.

“These educators know what it means to learn in urban schools,” noted Garaad, who has been working with Minneapolis Public Schools for more than 10 years. “They’re now coming back to work in the same school system they left some years ago.”

Many are getting their licenses in teaching, while others are becoming school counselors and social workers, explained Garaad, who is currently pursuing his master’s degree in school counseling at the University of Wisconsin-River Falls. He said that he’s also aware of other Somali-Americans who are attending education programs in universities throughout Minnesota, training to join the 69,529 licensed staff in the state’s education system.

The number of Somalis resettling in Minnesota has more than tripled in recent years, according to various reports, and as a result, school districts are seeing streams of Somali students. While many of these students — whose parents immigrated to the United States in the early 1990s and 2000s — are American-born, others are coming from refugee camps in Kenya and Ethiopia.

Abdirashid Saney, a counselor at Higher Ground Academy in St. Paul, has one explanation for the reason more Somali-Americans are joining the education work force: the demand in Minnesota for licensed teachers who are also competent in the Somali culture.

“Three or four years ago, there were a few Somalis with licenses in the entire state,” said Saney, adding that most of them were foreign-educated teachers. “These days, more are seeking and earning professional licenses required in the education field.”

While some Somali-Americans — like Garaad and Saney — pursue their education programs without the support of special programs, many are taking advantage of innovations aimed at diversifying the teacher work force in Minnesota.

Those initiatives include the Collaborative Urban Educator (CUE), a decade-long funding stream that the Minnesota Legislature appropriated to produce more teachers of color, in hopes of closing the widening achievement gap between the state’s white students and students of color.

“Closing the achievement gap is a major and persistent challenge in public education today,” stated signers of a document [PDF] in the Minnesota Legislative Reference Library. “Education experts agree that increasing the diversity of the teaching ranks improves student achievement in many settings because it provides students with teachers who can better empathize with their backgrounds and life experiences.”

Augsburg College is one of several institutions in Minnesota that have received funding to address the scarcity of teachers of color. Three years ago, Augsburg established the East African Student to Teacher (EAST) program to graduate and license K-12 teachers of East African origin.

The state allocated the EAST program $395,000 — which comes from the K-12 budget — to train students in its program, who receive a 100 percent tuition waver. 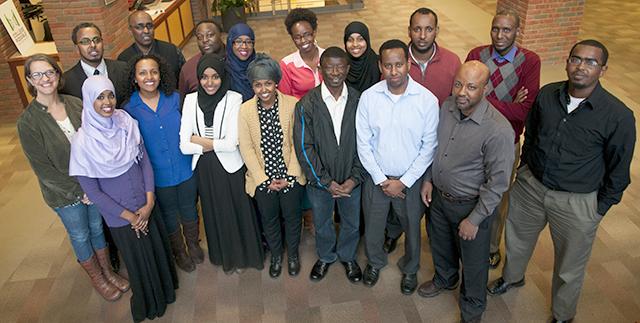 “Typically, becoming a professional teacher has been available only to people who have money and the means to get the license,” said Audrey Lensmire, an assistant professor at Augsburg and director of the EAST program. Today, Lensmire added, that opportunity is distributed to those who traditionally served as aides and translators in school districts across the state.

“Having the license to become a teacher legitimatizes the work that many, many, many immigrants have been doing,” she said.

Salah Ali, an EAST program student who’s doing his master’s in secondary math, knows nearly a dozen Somali-Americans who are pursing careers in education at Augsburg, and many more at Hamline University and the University of Minnesota.

“A lot of us are in the education field right now,” said Ali, who’s projected to graduate in 2017. “Many are doing social studies and ESL programs and counseling licenses.”

Ali added that he’s not doing it for money, but for passion and for the students, a sentiment and Garaad and Saney echoed.

Currently, the EAST program is training 19 students, many of them Somali-American. Since its birth, the program has graduated and licensed four student teachers. Nearly a dozen others are expected to graduate next year.

Abdiasis Hirsi and Maristella Omanyo, alumni of the EAST program, were hired recently as teachers in Minneapolis and Eden Prairie schools.

Minneapolis Residency Program (MRP), another program aimed at increasing teacher diversity, was launched in June in partnership with Minneapolis Public Schools, the Minneapolis Federation of Teachers and the University of Minnesota.

The program has recruited 25 students exclusively from the ranks of MPS employees for the yearlong training that would let them become licensed teachers for elementary education. Though MRP isn’t targeting specific cultural groups, 40 percent of this year’s cohort speak languages other than English, said Molly Sullivan, of Minneapolis Public Schools.

The students in the program get a yearlong co-teaching experience and intensive summer courses at the U of M, which offers the candidates a reduced fee for the program. In addition, MPS allocated $1.2 million to benefit the candidates, with each receiving nearly $25,000 in their yearlong journey to become teachers.

“For one reason or another, there has been a barrier in their life to experiencing or enrolling at a teacher-licensing program,” Sullivan said. “So this partnership came together to try and remove those barriers.”

Courtesy of MPS
Minneapolis Residency Program student teachers at the University of Minnesota.

Other local institutions with longstanding programs to diversify the teacher work force include the University of St. Thomas, Concordia University, Hamline University and Metro State University.

Abdirahman Mukhtar, chair of the Somali Parent Advisory Council, applauded the Somali-Americans for choosing careers in education, a field that has seen a significant decline in enrollment at teacher training programs in recent years.

“The first Somali professionals in Minnesota were teachers,” Mukhtar said. “They were our role models. This new wave of young teachers will be role models for the young generation of Somali-Americans.”