Asma Jama, the woman who was attacked recently for speaking Swahili, had a change of heart Sunday afternoon during a solidarity gathering in her support.

After the Oct. 30 attack at the Coon Rapids Applebee’s that left her with a deep gash in her lower lip and cuts across her face, Jama said she felt unwanted and unsafe in Minnesota, a place she’s called home for 15 years.

But when scores of Minnesotans — including Coon Rapids city officials and social-justice leaders from the Twin Cities — assembled Sunday at the Coon Rapids Center in her support, she said she was reminded that not all Minnesotans are like Jodie Burchard-Risch, the 43-year-old woman who allegedly smashed Jama’s face with a beer mug.

On the night of the attack, Jama was chatting in Swahili with her two cousins and four nieces in the restaurant, sitting near Burchard-Risch and her husband. “This is America,” Jama said Burchard-Risch told her and her family. “Speak English.”

Jama, who escaped from the Somali civil war in the early 1990s, came of age in Kenya, and speaks English, Swahili and Somali. She said she turned to the couple and asked, “Why should I speak in English? I’m speaking to my family and I can speak in any language I want.”

According to Jama, Burchard-Risch, of Ramsey, got angry and started yelling: “She told us to go back home,” said Jama.

When Jama turned around, she said, Burchard-Risch attacked her with a beer mug. Jama suffered deep cuts on her nose, left eyebrow and lower lip, which required 17 stitches.

“I’m so touched by all this love,” Jama said of the crowd at the center on Sunday. “It restored my faith in humanity. I didn’t know people cared. People care about strangers like me.” 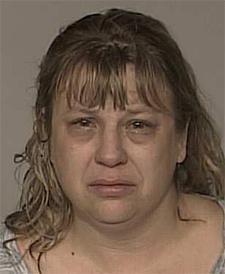 Natalie Ringsmuth, who drove from Waite Park with her family for the event, said she’s fighting a similar battle of hate and intolerance in the St. Cloud area.

“Muslims and Christians can get along together,” said Ringsmuth, founder of #UniteCloud, an organization that promotes peace and understanding among communities. “We’re a global nation at this point. We have to do better.”

Last week, the Minnesota chapter of the Council on American-Islamic Relations (CAIR-MN) called for hate-crime charges again Burchard-Risch, who was charged on last Monday in Anoka County District Court with third-degree assault.

“This is something we’ve been noticing across the United States,” said CAIR-MN Executive Director Jaylani Hussein of the incident.

He added: “We believe a lot of it has to do with an organized effort across the United States by right-wing groups who have now taken on spreading lies about Islam and Muslims.”

MinnPost photo by Ibrahim Hirsi
Scores of people gathered at the Coon Rapids Center to support Asma Jama on Sunday.

Monique Cullars-Doty, an organizer with Black Lives Matter St. Paul, said her group will continue to stand in solidarity with Jama and will work with Coon Rapids leaders to create an inclusive city.

“You just cannot abuse and bring your old ways into this new day,” Cullars-Doty said. “It’s a new day. We’re opening up a new chapter in Coon Rapids, where we can come together … to make sure that all are welcome in this community.”