The immigration rhetoric may have overshadowed the news in recent months, but a group of refugees in St. Paul say they have a different concern: surviving the Minnesota winter.

Seven newly arrived refugees from Asia, Africa and the Mideast recently huddled in a cultural orientation class in the International Institute of Minnesota to learn winter survival skills.

“What is this?” asked Stacy Dietrich, the class instructor.

“What is this?” Dietrich asked the class again, pointing at her feet.

After six years of a refugee life in Egypt, Adan boarded an airline to Minnesota three months ago, loading her bags with hijabs, flip-flops and everything else for the warm climate she’s always known.

“Egypt is sometimes cold,” although it isn’t cold enough for a coat, noted Aden, who also speaks fluent French, Somali and Arabic. “There’s no snow there.”

For many in the class, this year is their first winter in the United States — and to explain the meaning of these winter words can be a challenge, said Dietrich, who has been teaching immigrant and refugee students for four years.

Some of the first people refugees meet when they arrive in the state are workers at the institute who provide them with resettlement services, including citizenship and language classes as well as employment training and cultural orientation.

Within a day or two in the United States, most of these refugees end up in Dietrich’s class to start learning the English language and the American culture. “In their first few weeks, the students are nervous,” she said. “They seem a bit scared.”

Dietrich added: “If you’re here for only a couple of days, it’s terrifying. Someone is talking to you. And maybe even the topics that are been talked about can be scary.”

In the Dec. 4 class, those topics included the dangers of frostbite, winter storms and driving or walking on slippery roads. “This weather is dangerous even for the buses,” Dietrich told some of the students who take the public transportation.

After a few months in the U.S., she said, the refugees begin to open up and get comfortable with her and with their classmates. “They’re more confident with me,” she said. “They’re having fun. They’re laughing. [The class] gives them more of a social setting. It gives them enrichment.”

She added: “They’re more able to learn when they are relaxed. When you have tension and nervousness, or you’re scared of something, it’s hard to learn.”

‘They’re excited to be here’

Like many Americans, Dietrich has been following the immigration debate and the anti-Muslim rhetoric that has sprung up in the wake of the Paris and San Bernardino attacks. Last week, Donald Trump, the Republican front-runner in the presidential contest, called for an end to all Muslims coming in to the United States.

Likewise, some Minnesota lawmakers and residents have recently demanded a halt to President Barack Obama’s plan to admit 10,000 refugees from Syria in the next 12 months. “It’s coming from a place of fear,” Dietrich said of the concerns of those opposed to refugees. “People are nervous about new people coming to the United States.”

She added: “The people [refugees] I interact with are the perfect embodiment of what America is. They’re excited to be here, they’re leaving something horrible and painful to be here to be safe.” 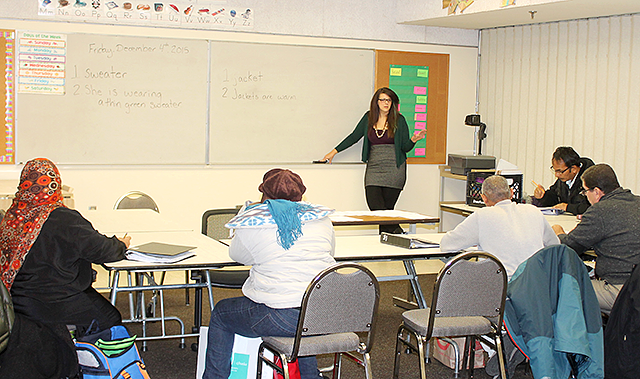 Palestine-native Walid Hussen, who came to the United States nine months ago, said his priority is to learn the English language. He and his wife, Hayat, were eager to share their response with the class when Dietrich asked the class to spell “Snow.”

“In Palestine, we speak little English,” he explained. “But now, we study English every day. We are doing homework every day, too.”

The winter words are difficult, said Adan, the refugee from Somalia, who wanted to write the translation of each English word she had learned in class in Somali. But when she attempted to translate “snow,” she could not: “No word for snow in Somali,” she explained. The closest word for “snow” is “baraf,” which means ice.

From frostbite to snow: Refugees learn new words — and how to survive Minnesota winters