Waheid Siraach sees it this way: Terrorism problems should be dealt with overseas to keep radicalization and recruitment in Minnesota at bay.

That conviction led the Metro Transit detective sergeant to take a yearlong leave of absence from his job in order to train Somali police forces in the capital Mogadishu — and to promote public safety in his native country.

“I believe that if Somalia is not safe, nowhere is actually safe,” said Siraach, who in 2013 became the first Somali-American sergeant anywhere in the United States. “What happens over there can come to us and assault us here. So, if we can take care of the problems there, we don’t have to deal with it over here.”

Somalia has seen more than two decades of violence and anarchy that gave way to streams of local and foreign fighters of al Shabaab, an al Qaeda linked group who controlled parts of the war-ravaged East African country.

Eight years ago, al Shabaab lured more than 20 Somali-Americans from Minnesota, getting them to fight against the fragile Somali government, guarded by troops from the African Union. This then-unprecedented recruitment shocked the Somali community here and sparked an alarm in the U.S. intelligence agencies.

Though al Shabaab fighters have been swept out of their strongholds in Mogadishu and other parts of the country, they’re still capable of carrying out deadly, sporadic attacks on government personnel and their supporters.

Mindful of these conditions in the country he left at 13, Siraach answered the call to train more than 100 men and women in uniform through a program funded by the U.S. Department of State’s Bureau of International Narcotics and Law Enforcement Affairs (INL).

“Mogadishu isn’t Minneapolis or St. Paul, where you can just drive around and pull over vehicles and rely on back-ups,” explained Siraach, also a chairman for the Somali-American Police Association. “This is a war-torn country.”

He added: “So I didn’t know what I was getting myself into. But I was determined and committed in going back and assisting the country in any way I could.”

U.S. for police reform in Somalia

The project that sent Siraach to Somalia is part of a $1.9 million initiative of the INL to support police reform in the country, according to the U.S. Department of State. It’s designed to improve the capacity of the Somali National Police Force to prevent and effectively respond to violence. 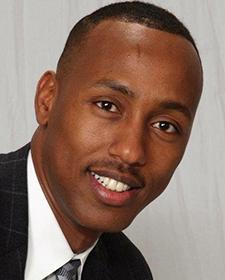 For the last 25 years, Siraach noted, Somalia didn’t have a functioning criminal investigation department.  But as the country emerges from the ruins of the civil war that erupted in 1991, the current administration is trying to rebuild the institution.

Some of the subjects that Siraach covered included lessons on investigating crimes, preparing cases and taking those cases to the attorney general’s office. Siraach said the trainees were motivated and eagerly absorbed the eight-year policing experience that Siraach honed on the streets of the Twin Cities.

“I was really impressed how dedicated and committed were the young people that we trained,” he added. “They really wanted to help themselves and their countries.”

‘You cannot break our spirit’

In the last four years, hundreds of Somali-Americans from Minnesota and other parts of the country have returned to Somalia to participate in the rebuilding process of the country.

Many have gone back to serve in the federal or regional governments, Siraach noted. Some have established businesses — including Western-style restaurants, transportation system and construction companies — while others have taken jobs with international development organizations or in the private sector.

“There wasn’t a day that I didn’t run into somebody from the Twin Cities or somebody with an American accent,” Siraach noted. Many of them are people with advanced degrees. They are coming back from all over the world to take part of the new reconstruction of Somalia.”

As the country’s federal administration and its citizens try to bring back the country’s better days, al-Shabaab remnants in Mogadishu continue to respond with their signature attacks on the people leading efforts to rebuild Somalia.

Last month, the group attacked a hotel in Mogadishu and killed at least 13 people, including a top military commander, a parliamentarian and a journalist. This was part of a series of assaults on hotels often occupied by diplomats and government personnel.

In fact, on July 26, Siraach survived a deadly attack on Jazeera Palace Hotel, where he lived most of his time in Mogadishu. Fifteen people were killed in the assault, which was carried out by a suicide bomber who stormed into the hotel in a vehicle loaded with explosives, according to news reports.

Siraach returned to the hotel a few days after it was repaired. “What amazes me the most is that in just a matter of days, everywhere that the attackers destroyed were rebuilt and businesses went on as usual,” Siraach said.

He added: “That’s saying: ‘Yes, you can destroy buildings, you can take lives, but you cannot break our spirit. We’re here for the long haul.’”

Leading a delegation to Minnesota

Marking the end of the yearlong project in Mogadishu, Siraach recently led a delegation of senior police officers to Minneapolis in an effort to establish a relationship between law enforcement in Minnesota and Somalia.

Siraach said he hopes the new relationship will build a bridge between Somalia and Minnesota law enforcement and will encourage collaboration on terror-related issues.

“We have a lot of problems that affect both Somalia and Minnesota,” he noted. “Young people are recruited from Minnesota to Somalia to commit acts of terrorism.” 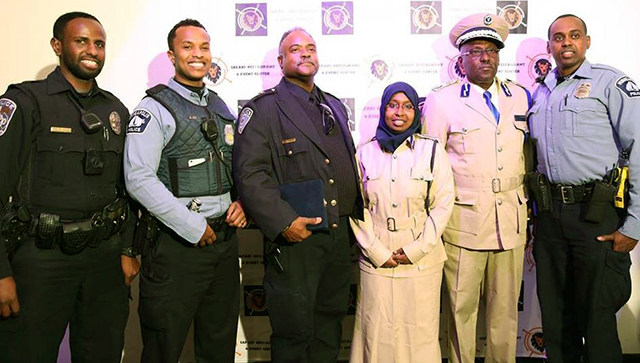 Courtesy of Waheid Siraach
A delegation of senior police officers from Somalia visited Minnesota in an effort to establish a relationship between law enforcement in Minnesota and Somalia.

Among them was Metro Transit Chief John Harrington, who also visited Somalia in August for weeklong talks on public safety and building a relationship with the Somali police force.