For more than two decades, thousands of people have turned to the Hmong Cultural Center in St. Paul to learn about the history and culture of the Hmong-American community.

The center has provided visitors with educational and multicultural classes that chronicle the history of the Hmong as well as the trials and triumphs they’ve experienced as they make their mark in the Twin Cities.

Recently, the Hmong Cultural Center has added a new exhibit to its already expanding cultural and art collections. The 10 large panels detail the community’s demographics, political and cultural diversity, and contributions in photos and words.

“The primary audience is the broader community,” said Mark Pfeifer, the center’s director of programs and development. “We want to provide a place where your average person who doesn’t know much about Hmong can come in and see some exhibits to learn more about the growing Hmong community here in Minnesota.”

What’s different about this exhibit, Pfeifer explained, is that it will stay permanently on the walls, unlike similar projects featured at other historic and cultural centers.

One of the elements in the exhibit includes a large black and white photo — shot in the early 1980s — of three Hmong children outside St. Paul’s Liberty Plaza. Enveloped in winter gear, they’re seen building an igloo out of snow as the Minnesota State Capitol towers behind them.

“We really like this picture,” Pfeifer noted, adding that the Liberty Plaza is among the places that housed the first waves of the Hmong community in Minnesota. “It’s in this neighborhood. It’s probably about four blocks down Western Avenue.”

Another slide features Dang Her and his family, the first Hmong to settle in Minnesota 40 years ago. Shoua Moua, his wife, and son Touvi accompanied him on the journey to the U.S.

Escaping persecutions and political conflicts that ravaged their homeland in Laos, the Hmong began to stream into Minnesota in 1975 as refugees. Today, according to Pfeifer, the state is home to about 80,000 Hmong — with the highest concentration in St. Paul.

The exhibit — Hmong Minnesota: Yesterday and Today — takes people on a journey through Hmong history in Minnesota as it highlights the struggle they face and the impact they’ve made on their adopted Minnesota home.

One panel underscores discrimination and adjustment issues that the community encountered in the early stage of their arrival in Minnesota. It also explains how they’ve reacted to these challenges: through civic engagement and activism.

Today, the community has several public officials in the Twin Cities, thriving businesses and professionals working in health, science and education fields. 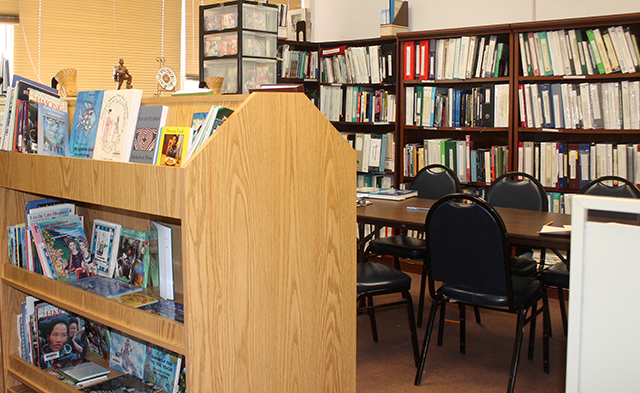 MinnPost photo by Ibrahim Hirsi
The Hmong Cultural Center library has one of the largest collections of Hmong books and scholarly articles in the world.

The launch of the show comes at a time when the Hmong Cultural Center is expanding its educational and cultural programs. Its library project has one of the largest collections of Hmong books and scholarly articles in the world — and is the biggest in the U.S., Pfeifer noted.

He added that the Hmong Cultural Center, founded in 1992, has had an expansion of books in the last six months. The center has purchased new Hmong language books and scholarly articles.

Over the years, Pfeifer said, the center has received visitors from other states and even from other countries using library facilities for research as well as educational and cultural development.

The center, located on University Avenue, has also expanded its offering of English and citizenship classes to new refugees and immigrants from Southeast Asia, East Africa and other parts of the world.

The center offers a Hmong 101 course aimed at non-Hmong and the younger Hmong generation looking to learn the basics of the history and culture of the Hmong. The center also offers year-round courses on traditional Hmong dance and music.

“A lot of what’s on these panels is tied to our curriculum,” Pfeifer said. “We have a curriculum related to the Hmong culture and history that we want to help people learn more about the community.”

For Blia Me Lor, a 28-year-old mother of three, the Hmong Cultural Center is a treasure that preserves the culture, language and history of the Hmong people. Lor, who left a Laos refugee camp 14 years ago for the U.S., said she often brings her boys — American-born and age 7, 9 and 10 — to the center.

“This place reminds me of my home country,” said Lor, a student at the center. “It’s good for the kids, too.”

The “Hmong Minnesota: Yesterday and Today” exhibit was funded in part by the Minnesota Historical Society.

‘Hmong Minnesota: Yesterday and Today’ will be a permanent exhibit at the Hmong Cultural Center