Until last Monday, when the Muslim holy month of Ramadan began, Capitol Café in Minneapolis was a flourishing social hub, a destination for hundreds of East African customers.

The Seward neighborhood café served as more than just a place to go for light food and drinks: It was a home base for conversations about politics, sports and important issues affecting the community. Indeed, customers said it felt like a bar — without alcohol.

Since Ramadan began on June 6, however, the shop hasn’t been the same. These days, it stands nearly deserted, though the four flat-screen TVs in the café still buzz with local and international news.

That’s because most of the shop’s regular customers, most of them men, are Muslims who are observing Ramadan, a month filled with intense nightly prayers and dawn-to-dusk fasting — where even a single sip of water is enough to invalidate one’s fast.

“This place is dead during Ramadan,” Burhan Elmi, owner and operator of the café, said last Thursday. “It’s 2 p.m. now, and only one American customer came to buy a sandwich.”

It’s a familiar scenario for the many coffee shops and restaurants across Minnesota that depend on Muslim customers these days, when traffic, and profits, will be a fraction what they would normally be — a situation that also raises an obvious question: How do such businesses survive during Ramadan?

The story behind Ramadan

Muslims consider Ramadan the most sacred month of the year. It’s marked with nightly prayers, fasting and giving to commemorate the first revelation of the Quran to the Prophet Muhammad.

Fasting during Ramadan is one of the Five Pillars of Islam, the acts of worship central to the religion: reciting the Islamic profession of faith; praying five times a day; paying charity tax to benefit the poor and needy; fasting during Ramadan; and performing Hajj, the pilgrimage to Mecca.

(There are a few exceptions. Young children; the elderly; travelers; people with medical conditions and women who are pregnant, breastfeeding or menstruating are not expected to fast.) 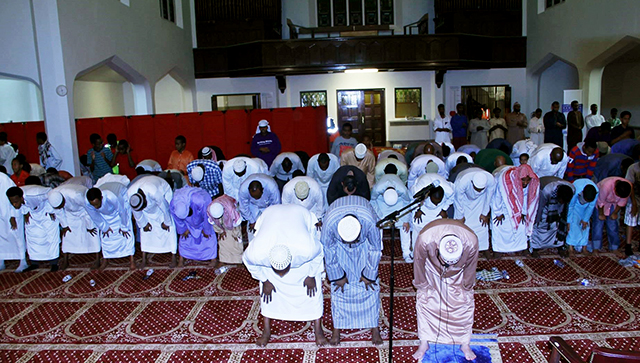 During Ramadan, it’s not just food and drink that observers refrain from. They’re also to avoid other activities during the day — from smoking and chewing gum to sex.

But this year, Ramadan happens to fall during the hottest and longest days of the year. That means the estimated 150,000 Muslims in Minnesota stay hungry for 18 hours each day, while juggling several special Ramadan activities during short nights. For example, observant Muslims first eat iftar, the traditional nightly feasts, after sundown; attend mosque for especial prayers through midnight; and then rise for 3 a.m. breakfast — known as suhoor — to help them get through the day.

Many of Minnesota’s Muslim immigrants, especially those who lived in Islamic countries, are used to seeing restaurants shut down during Ramadan. In fact, some countries in the Middle East — including Saudi Arabia and the United Arab Emirates — make it a crime to serve food or drink in public during the day during in Ramadan.

But others stay open. Capitol Café and Safari Restaurant, for example, continue their services with reduced hours. For the second week in a row, Elmi has opened Capitol Café at 11 a.m., four hours after the usual 7:30 a.m. opening time. He chose to keep the doors open hoping to generate income to help pay the bills to maintain the shop. But from his experience in the past nine days, those payments will likely come out of his own pocket this month.

“There is no way I can pay for rent and the bills from [the shop] this month,” he noted. “No one is coming to get something. I will have to dig into my savings to pay the bills.” 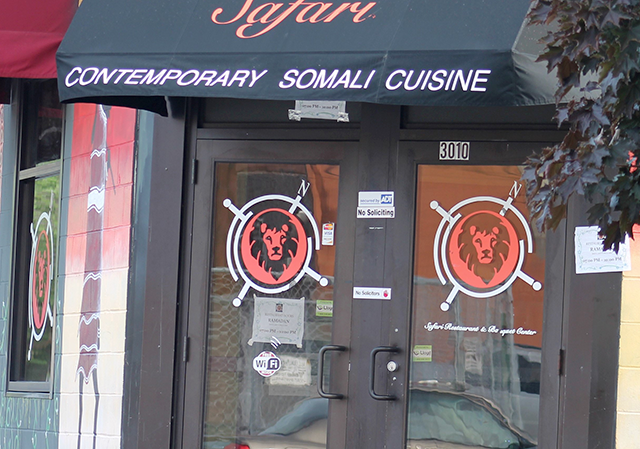 MinnPost photo by Ibrahim Hirsi
The signs on the doors of the Safari restaurant in Minneapolis show business hours from 7 p.m. to 10 p.m.

Last week, Elmi had to let go all his four employees for the month because he wasn’t able to pay them. Subsequently, his role as a manager has already shifted from overseeing operations to working in the kitchen.

On a recent Thursday afternoon, Elmi was flipping pancakes on a frying pan, though he had no idea whether anybody was going to show up to order them. “I’m just being hopeful now,” noted Elmi, whose Capitol Café is located in the Seward neighborhood. “In this area, there are a lot of older Muslims and non-Muslim customers who are not fasting. I’m hoping someone will stop by.”

Elmi added that he’s also working to attract more non-Muslim customers, who would maintain the shop in the many Ramadan months to come. “If you just plan on closing your business every Ramadan, you can’t survive,” he said. “I need to bring other communities. It’s the only solution.”

Though fasting is most associated with Ramadan, food plays a significant role in celebrating the month. Observers break their fasting with dates, milk and water — following by big meals including rice, bread, chicken and lamb as well as lots of fruit and vegetables.

And in contrast to small businesses, some larger restaurants in the Twin Cities — including Minneapolis’s Holy Land, Marina Grill and Deli, Safari Restaurant and Marhaba Mediterranean Grill — actually expand their services during the month, offering iftar.

Though they still face slower traffic during the day, such restaurants see an increased number of customers at night. Safari Restaurant, for example, serves a buffet for about 200 people at sundown. It also makes available take-away orders for families and second-shift workers who come to the restaurant prior to sunset.

Others, such as Marhaba Mediterranean Grill and Marina Grill and Deli, set up tents in the parking lots to accommodate more Ramadan observant customers who come to the restaurant to break their fast. Mohamed Shehata, who’s owned and operated Marhaba Mediterranean Grill for the past four years, said he had to hire five more employees for the month. 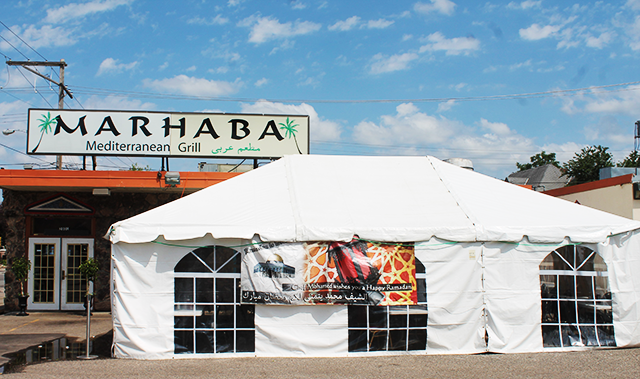 MinnPost photo by Ibrahim Hirsi
Marhaba Mediterranean Grill, in south Minneapolis, is one of a few halal restaurants that manages to thrive during Ramadan.

Ahmed Tharwat, a regular at the Marhaba, noted that the restaurant is more than just a business. “It’s a cultural center,” he said. “People come here together, socialize and exchange ideas.”

Shehata and Tharwat, both Egyptian natives, added that the Ramadan they had experienced in their native country was very different from that of Minnesota. “In Egypt, everybody celebrates Ramadan,” Tharwat explained. “When you go on the streets, you would find people celebrating with food and prayers all night.”

On July 7, Muslims will mark the end of Ramadan with Eid al-Fitr, a holiday celebrating the completion of Ramadan.

It will also mark the day when the eating habits of Ramadan observers return to normal. “I can’t wait to see it full again,” said Burhan Elmi of his Capitol Café. “This is a difficult time for businesses in general, and it will certainly help to have people coming to the place.”