On a recent Saturday morning, Igor Fridman walked into the Booth Manor senior apartments in Minneapolis to see his 90-year-old grandmother, who has lived in the affordable housing complex near Loring Park for more than two decades.

In the building’s lobby, some residents chatted by the elevators, some gathered around a table, while others talked with their loved ones through Skype.

It was, in other words, an utterly unremarkable scene, except for one detail: Everyone was speaking Russian.

That’s because the majority of the residents in the complex are immigrants from the former Soviet Union. “This place feels like home,” said Basya Fridman, who emigrated from Moldova in the early 1990s. “I like it a lot.”

The Fridman family came to Minnesota after the Soviet Union collapsed in 1991, eventually settling in St. Louis Park, where a large portion of the Twin Cities’ Russian-speaking population lived.

“There was a really good sense of community where you could go outside and everyone spoke Russian,” said Igor Fridman, who came to the U.S. in 1993 speaking no English.

By the end of the decade, the community gradually dispersed, as much of the Russian-speaking community established new lives in various cities and suburbs cities across Minnesota — including Minneapolis, Plymouth, Golden Valley, Hopkins, Anoka and Blaine.

The Russian-speaking community is considered one of the oldest immigrant groups in Minnesota. In fact, many of them began streaming into Minnesota during the 19th century, though it can be more complicated to pinpoint the community’s arrival compared to other immigrant groups. That’s because Russian speakers came to the U.S. in different waves over an extended period of time, said Vladimir von Tsurikov, who heads The Museum of Russian Art in south Minneapolis.

They also chose to come to the United States under myriad different circumstances. Some came for economic reasons; others escaped religious persecution.

Most recent Russian speakers have come to Minnesota in one of several different waves: One group arrived in the 1970s, another in the 1980s, and a large group came after the Soviet Union collapsed in 1991. (Yet another group arrived in the 2000s, often to join family members already here or to work at one of the state’s medical facilities or multinational corporations.)

Many in the earlier groups were Russian Jews who escaped discrimination and religious persecution, said Anatoly Liberman, a renowned linguistics scholar and longtime professor at University of Minnesota.

Liberman didn’t consider Israel an option because he wouldn’t have found a job in his chosen career. “I didn’t know Hebrew,” he noted. “And I knew English very well, which was a tremendous advantage, which I didn’t want to lose.” 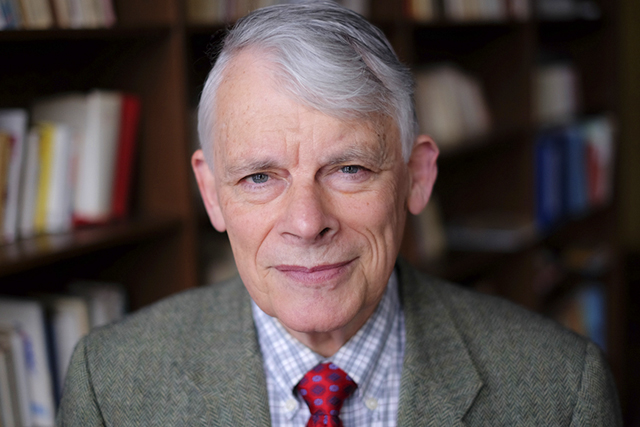 So Liberman chose to make the U.S. home instead. In 1975, after waiting out the vetting process in Italy, where hundreds of immigrants from Russia were screened before their arrival in the U.S., he learned about a teaching position that had opened at the University of Minnesota.

He spent a year as a visiting professor at the U, an opportunity he describes as “tremendous luck,” and a year later was promoted to teach permanently.

Today, tens of thousands of Russian speakers call Minnesota home. But the actual number of the population is impossible to pin down: Estimates from community leaders put it at 60,000, a number far larger than the Minnesota State Demographic Center’s estimate, which counts 43,000 residents who claim Russian ancestry in Minnesota. And the most recent census report indicates there are 14,000 people in the state who were born in Russia.

Whatever the number, many members of the community came to Minnesota highly educated and with significant job experience. “I don’t think there was anyone without any formal education,” Liberman said.

As a result, the Russian-speaking community is one of the most affluent immigrant communities in Minnesota. Many live in the west-metro cities, holding engineering and technology jobs at major companies, including Medtronic, Boston Scientific and St. Jude Medical.

In the decades that Russian immigrants and others from the former Soviet Union have lived in Minnesota, the community has planted roots in its adopted home: They’ve established Russian-speaking churches, charter and private schools, newspapers, businesses and even a museum.

In 2012, the community center established a K-6 charter school, Nasha Shkola, in Minnetonka. The school focuses on the Russian language and culture to help the children of immigrants preserve their culture and language. 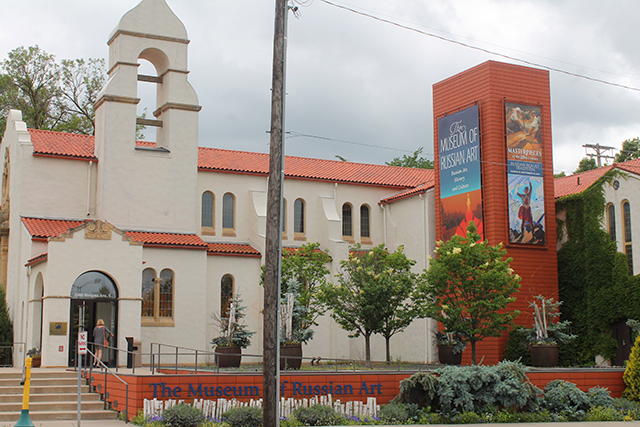 MinnPost photo by Ibrahim Hirsi
The Museum of Russian Art, located in south Minneapolis, was founded by an American art dealer and collector to preserve the culture and history of Russia.

The community has also several Russian newspapers, dozens of churches and synagogues as well as restaurants, pharmacies and grocery shops across Minnesota.

Local Russian newspapers are the main sources of information for immigrants like Basya Fridman, who closely follows local and international news. She explained that she reads everything from crime stories in the Twin Cities metro area to articles about politics in Russia.

Likewise, The Museum of Russian Art was opened in 2002 to accentuate the art, culture and history of Russia. Each year, the member-supported nonprofit organizes between six and eight exhibits to educate its diverse museum-goers about Russian art and culture.

“We’re showing an exhibition of a Ukrainian-American artist who came here in the 1950s … and made Minneapolis his home,” said Tsurikov. “For us, this was a specific interest precisely because it’s such a Minnesotan story because of the immigrant and refugee communities.”

One of the pressing challenges that the Russian-speaking immigrants grapple with, Meerovich explained, is the rising drug abuse, especially among young people. What makes this even harder for parents and community leaders is that it’s the first time they’re dealing with such an issue. “The culture disconnect is tough for a lot of families to take,” Igor Fridman said. “Kids come here, learn the American culture and maybe experiment with drugs. They kind of change their behavior.”

“Their parents don’t get it,” he continued. “So they react strongly … because they have a tough time absorbing that experience.”

Yet Russian parents are often reluctant to seek help, Meerovich said. Like most immigrant communities, Russian parents don’t share their personal issues with people outside their immediate family, so they think: “It’s my problem, my family issues, and I keep my mouth shut, and I’m not going to share it with anyone because it’s shame,” he said.

Meerovich spoke of two parents who lost their 17-year-old son to an overdose last year. The mother is Russian-born; the father, an American.

“The Russian mom doesn’t want to speak about this at all,” he noted. “It’s too shameful for her. The American dad speaks about it at events, talks to newspapers and TV shows. He’s our spokesperson of this issue in order to help another family to prevent future drug deaths.” 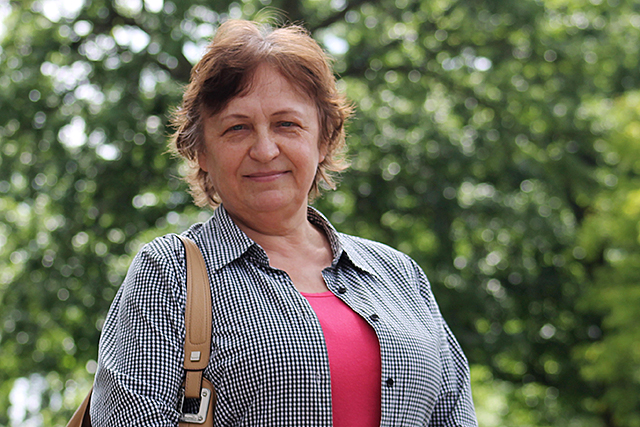 MinnPost photo by Ibrahim Hirsi
Ludmila Doiakulich, who was born Ukraine and grew up in Russia, is among the latest wave of immigrants from the Soviet Union who came to Minnesota in the 2000s.

Of course, drug use isn’t the only problem the community faces. Those who came in the 1990s and 2000s as adults are often culturally isolated, even if they’re economically stable, said Igor Fridman. Unlike the Hmong and Somalis, who have tight-knit communities concentrated in specific neighborhoods in the Twin Cities, Russian-speaking immigrants tend to be scattered across various cities in the metro area, and therefore don’t have a location that gives them a defined sense of community. “When people lived in St. Louis Park, they felt like they were part of a community,” he added. “And then everyone slowly got jobs. People moved to the suburbs and bought houses.”

Ludmila Doiakulich, a 57-year-old Ukrainian-born woman who grew up in Russia, agrees with the sentiment. Doiakulich, who works at Booth Manor senior housing as a personal care assistant, came to Minnesota 15 years ago with her seven children. “It’s very hard for older people,” she said. “That makes life a little difficult. But it’s very easy for young people.”

Over the past several decades, immigrants and refugees from East Africa, Southeast Asia and Mexico have emerged and become active in politics. The Hmong community in the Twin Cities, for example, has seen several Hmong politicians elected to positions in state and local government while the Hispanic and Somali communities continue to get more deeply engaged in electoral politics in the Twin Cities, St. Cloud and Mankato.

Such activism have made immigrant communities of color — and their priorities — more visible among lawmakers as well as local and state officials.

Meerovich would like to see that same level of attention paid to his Russian-speaking community. Indeed, he uses any opportunity he can get to introduce the plight of refugees and immigrants from Russia and the former Soviet countries to local foundation leaders and state officials.

Meerovich’s message is that the Russian-speaking community faces many of the same challenges and needs as immigrants from African, Asia and Latin America. “I need to educate foundations that we have the same problems as the Somali community, Latino community and Hmong community,” he said. “Our community needs help as well.”

Through his Slavic center, which currently serves older people and young children, Meerovich said he hopes to expand services for teens and young adults in his community who struggle with chemical dependency.

As Igor Fridman notes, though, many Russians remain grateful to the U.S. government, thankful for the opportunity to live in the United States. As his grandmother, Basya Fridman, says of her life in Minnesota. “I never faced any challenges here. I’m happy with what I have: to live in America, to be around my family.”