Growing up in north Minneapolis, Fue Lee didn’t live the typical lifestyle of an American kid: At a young age, he was representing his parents, who didn’t speak English, at meetings with public housing and welfare officials.

He also took them to medical appointments and translated letters received from Hennepin County social services. “I was basically their parent,” Lee noted, “just because I had the language skills.”

Those responsibilities led Lee, who has lived on the north side for more than two decades, to take notice of the economic and racial disparities people like his parents have faced in Minnesota.

Which is how, on a cold winter day seven months ago, he ended up standing before a group of people in a community event center in north Minneapolis, announcing his candidacy for a seat in the state House. “Today, less than 6 out of 10 students of color graduate on time,” he said. “Most of the people who are incarcerated are people of color and racial and ethnic minorities.”

After months-long campaign, Lee won the DFL primary for the seat representing Minneapolis’ House District 59A. To secure that victory, Lee, who was born in a refugee camp Thailand and emigrated to the United States in 1992, had to defeat Rep. Joe Mullery, a veteran politician who represented north Minneapolis for more than 20 years and was backed by some of Minnesota’s best know politicians, including Congressman Keith Ellison and Gov. Mark Dayton.

Now, if, as expected, Lee prevails in the general election, the 24-year-old Carleton College graduate will become the first Hmong-American to represent Minneapolis at the Capitol. Yet the victory would do more than mark a bit of history; it also punctuates the growing political power of Hmong-Americans in Minneapolis — a community that has largely been overshadowed by its larger and more politically active counterpart in St. Paul.

According to the Minnesota History Center, 260,000 Hmong currently live in the United States. Of those, more than 66,000 have made Minnesota their home — with a large number of those living in St. Paul, site of the state’s largest Hmong-American community.

In Minneapolis, the Hmong community is far smaller than it is in St. Paul, but it is also highly concentrated. Of the nearly 7,000 Hmong-Americans who live in the city, 6,000 live on the north side. Today, more than 16 percent of the north side population identifies as Asian or Pacific Islander — most of them Hmong — compared to 6 percent for the city overall, according to Craig Helmstetter, a senior researcher and project director at Wilder Foundation. 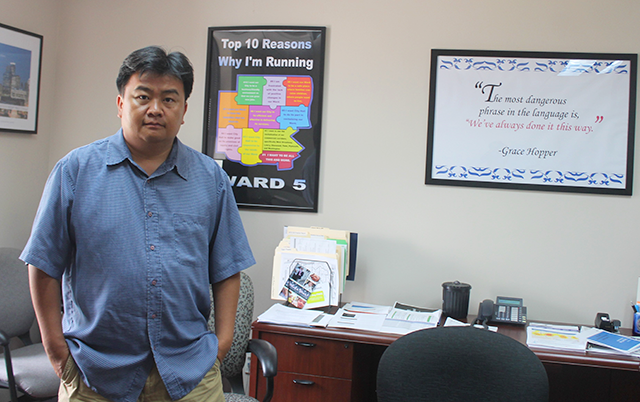 MinnPost photo by Ibrahim Hirsi
Council Member Blong Yang is the first Hmong-American elected to a public office in Minneapolis.

Among the main factors that attract the community to north Minneapolis is the area’s housing affordability and its diversity. “Sometimes people talk about the dynamics between African-Americans, Hmong people and others,” in north Minneapolis, said Minneapolis Council Member Blong Yang, who represents most of the north side. “In a lot of ways, we’re very similar; and that’s why we can live together.”

On a recent Saturday morning, the Hmong-owned Good Deal Oriental Food on Lowry Avenue had a steady traffic flow of Hmong, African-American and white customers. “I like it here a lot,” said Fue Yang, a Good Deal employee who moved to north Minneapolis from Eau Claire for the job and the sense of community the north side offers. “I have many Hmong friends that I get to spend time with. You couldn’t get that from where I was born.”

Though many Hmong-Americans continue to make their mark in north Minneapolis, the community has faced their share of challenges, including cultural and language barriers that make it difficult for some to fully participate in American society, or access the services designed to help them do so. “They don’t know [the various] government levels and what government can do to help them,” said Blong Yang. “It’s kind of like they live in a vacuum without understanding what’s there for them.”

Other concerns are those shared by many residents in north Minneapolis: access to goods and services widely available in other parts of the city; violent crime; and safe and quality public schools for their kids. “You ask what these families want,” Yang said. “They just want two things: they want that their kids are safe. They want their kids to receive a good education.”

For too long, though, not enough Hmong-American organizations or activists stood up to address community issues, said Yang. “You have some folks who are very quiet, almost passive and let things happen,” he said. “That sort of attitude has allowed for things to just kind of pass our community by for so long.”

That’s begun to change. In 2013, Yang became the first Hmong-American to serve on the Minneapolis City Council, replacing Don Samuels, who ran for Minneapolis mayor that year before being elected to the Minneapolis school board in 2014.

Yang’s campaign inspired many young Hmong-Americans to get involved in politics — including Lee, who works for Secretary of State Steve Simon’s office. Fresh out of Carleton, Lee wanted to help change the politics affecting north Minneapolis, so he joined Yang’s campaign team, helping to organize voters. The long days he spent on the campaign trail with other activists and organizers that year inspired him to want a career in public office himself. 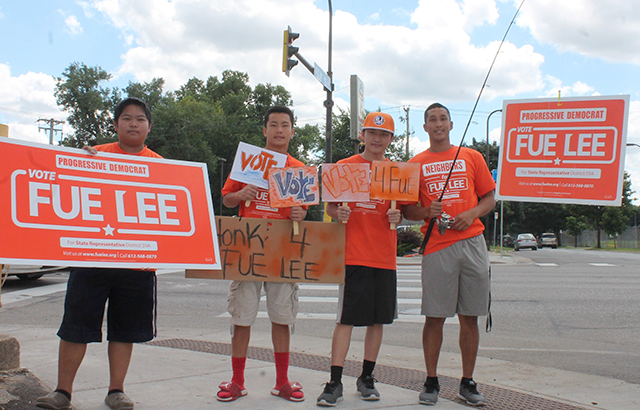 So in January of this year, Lee announced his candidacy. Over the next six months he dedicated 40 hours a week to the campaign, phone banking and door-knocking to introduce himself to the constituencies in the district. “I was cautiously optimistic,” he said of his chance of winning. “We knew that we had a good number if we had everybody who said they’d support me come out.”

Lee now faces Republican candidate Jessica Newville in the general election in November, and is expected to win in the heavily Democratic district. At the Capitol, he hopes to work on improving education, public safety and community-police relations, among other things.

“The most important thing for us is to go to the state Capitol with an open mind and see how we can work with everyone regardless of our political affiliation,” Lee added. “At the end of the day, our neighbors are the ones suffering, and we really need to do whatever we can to help everyone.”