WILLMAR, Minn. – When I was a grade-school student here in the 1970s and early ’80s, I went to Lafayette Elementary School, a midcentury brick building on the city’s north side, an older neighborhood of tree-shaded streets and modest homes.

Lafayette eventually closed as the district moved away from neighborhood schools in favor of more centralized ones, becoming a day care for a time after being sold. A few years ago, it took on another incarnation when a group of Somalis bought it for use as the Islamic Society of Willmar, a gathering place and mosque for the city’s Muslim community.

While Somalis have been living here for more than two decades now, long enough that their presence is no longer a novelty but rather part of the fabric of this west-central Minnesota town, the mosque has given them what they have long sought: a permanent, spacious place of worship. “It’s been very good for us,” the imam of the mosque, Aden Hassan, told me.

So after visiting the Islamic society and walking around my old neighborhood, I had to wonder: Can this old building give Muslims living here a stronger sense of place?

‘The doors are always open’

With sizable Latino and Somali populations, Willmar has been a laboratory for ethnic relations, further ahead of the curve than other rural towns and suburbs that haven’t experienced much demographic change. Yet tensions sometimes flare.

In January, a widely circulated Facebook post, later traced to a rural Minnesota woman, claimed that Willmar “is going to be totally taken over by Muslims” (a comment she attributed to a Willmar couple that had spoken to a friend of hers in Arizona). Part of the proof, the post claimed, was that a former public school had been turned into a mosque.

The West Central Tribune, the daily paper that covers this part of the state, responded in an editorial, noting that there was nothing unusual about an old school being re-imagined for a different purpose. Moreover, the paper retorted, “Much of the current criticism of Muslim immigrants in west central Minnesota and America is based upon fear, ignorance and, for some, just plain bigotry.” (Gov. Mark Dayton lauded the paper for its position in a letter to the editor, and the Star Tribune republished the paper’s editorial).

That was on my mind on the hot July day when I visited, arriving just as people were scattering to their cars after afternoon prayers. The first man I approached, an older man in a long gown, walked right by me, saying his English was “not too good.” Several younger men – seeing my notebook or camera bag, I guessed – steered me toward another young man, a member of the society’s board of directors named Jamal Hamud.

Hamud was wearing a white kufi (a traditional African cap) and a white T-shirt promoting the state of Utah, where he had gone to college. He and his wife had lived in Willmar for about 10 years in a kind of limbo – part of the community, to be sure, yet somewhat set apart. He hoped the mosque might help to change that, though at this stage its outreach was mostly informal. “We tell people that they are always welcome to come in. The doors are always open,” he said. “I think that will help over time.”

Earlier this summer, Hassan, the imam, invited non-Muslim residents to the mosque for an evening meal during Ramadan, a monthlong Islamic observance that includes daily fasting. More recently, he appeared before the city’s Human Rights Commission to talk about the mosque – even to answer pointed questions about his sermons and any potential for radicalization.

Off the beaten path

Willmar’s north side is bordered by railroad tracks to the south and a lake to the north and east. It’s quiet, with little traffic (except on summer nights when stock cars race at the nearby track). Yet it’s a grittier neighborhood than I remember, now home to many immigrant and refugee families that are just starting out. (Somali teenagers now play soccer across the street from the mosque, on the field where I played youth baseball).

Andrew Plowman, who represents the neighborhood on the City Council, said he found the Islamic society, along with some developing Somali businesses in Willmar, to be “good steps toward assimilation.” And he welcomed any conversation the society might generate, acknowledging the anxieties people have about the dramatic change in town. 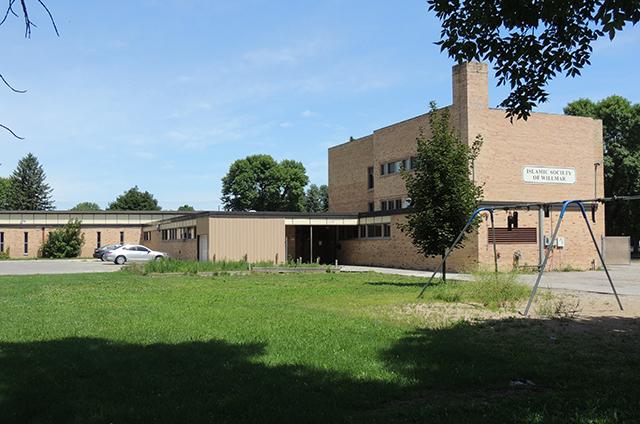 “Yeah, it’s an old school,” he said, “but more and more people are coming to realize what it is.”

A few days after my initial visit to the mosque, I sat at the breakfast counter at Frieda’s Café, a popular breakfast-and-lunch stop in the city’s downtown business district. The patrons were all white, at least when I was there (though, the owner told me, Somalis eat there once in a while). Meanwhile, Bihi Restaurant, a Somali café just around the corner, was filling up with its mostly East African clientele.

Jonathan Olmscheid, a business consultant who was sitting next to me, said he had met several Somalis through a Chamber of Commerce group that studied Willmar’s ethnic heritage and toured Somali businesses. He was also married to an elementary school teacher who was well versed in Willmar’s cultural dynamics, having taught a diverse range of students.

So on a few of his drives through the north side to the racetrack (he’s a stock car driver), he had taken time to drive by the mosque and have a look. “Otherwise,” he said, “I don’t think I would have ever gone by it.”

Out of tragedy, a sense of community

For many years, Somalis —who make up about 1,000 of Willmar’s 20,000 residents, according to Census figures — worshipped at a makeshift mosque in the city’s downtown, across the street from Bethel Lutheran Church, putting that ELCA congregation in close proximity to one of the larger Muslim communities in rural Minnesota.

Some of Bethel’s congregants have taught English classes for Somalis, while others have taken walking tours of Somali businesses located just a few blocks away. As the Rev. Jon Dahl told me, part of being Christian was “trying to get to know them and discovering some of the similarities they have with our faith. And as we discover differences, to hopefully develop a mutual respect for those.”

In June, two Somali boys, 10-year-old Idris Hussein and 11-year-old Ahmed Hashi, both elementary students in town, drowned in Foot Lake near the entrance to the Kandiyohi County Fairgrounds – just blocks from the mosque. Following Islamic custom, Somalis buried the boys quickly, just a day after their deaths, in a cemetery near the shores of the lake.

A Bethel member, Jared Wosmek, who works as a police officer in Willmar, arranged a walk, over Facebook, in memory of the boys. A few days later, about 250 people, mostly white Willmar residents, gathered outside the church and walked to the mosque, a dozen blocks away, and then on to the site at the lake where the boys had drowned. At one point, the mother of one of the drowned boys joined the marchers.

I asked Hamud, the young Somali man I met at the mosque, about the walk.

“It was moving. It was breathtaking,” he said, simply. “We were really appreciative of that.”

Can an aging building in Willmar help rural Muslims find a sense of place?