On a recent Sunday afternoon, 16-year-old Stephany Carmona stood alongside her father, Ricardo, manning a booth at the Mexican Independence Day celebration in Minneapolis. Both wore T-shirts with a message: “Minnesota says Dump Trump.”

Like many Latino voters, the Carmonas have been frustrated by harsh statements from Republican presidential candidate Donald Trump, who dubbed Mexican undocumented immigrants like Ricardo as “rapists” and “criminals” — and called for mass deportations and the construction of a large border wall.

“I don’t think Trump is doing the best for us,” Stephany said, fighting back tears. “He’s just saying, ‘Oh Hispanics are bad. They’re making this country bad.’ But in reality, we’re here to make a better future for our families and for ourselves.”

That’s why Stephany and Ricardo showed up at the event on Lake Street earlier this month, to educate people about the electoral process and register them to vote. They were among several volunteers for the Minnesota Rights Action Committee (MIRAc), a group that works with immigrant communities on legalization and equality for undocumented Minnesotans — and just one of the organizations that are attempting to use Trump’s anti-immigrant rhetoric to mobilize Hispanic voters in Minnesota this year.

“It’s very important,” said Ricardo Carmona, who left Mexico for Minnesota 16 years ago. “I’m not eligible to vote, but helping people vote is a way for us to say, ‘That’s what we want, that’s right for us.’”

Though many Latino leaders in Minnesota have noted the community’s enthusiasm to voting in this year’s elections, some of those voters face unique challenges, says Luz Francisco, a community specialist with the City of Minneapolis.

Many immigrants who become U.S. citizens are unfamiliar with the voting process, she said, or they struggle with English and so they don’t know the candidates and where they stand on important issues. “Some people have advanced understanding about the elections,” she explained. “Others don’t have a clue about what elections are. They need to get the information about voting: how to get registered and where they need to go in order to vote.”

In recent decades, the number of immigrant communities in Minnesota has increased — with the Hispanic population being one the largest: The state has now more than 275,000 Latino residents, according to a recent report by the Pew Research Center. Of those, 96,000 (or 35 percent) are currently eligible to vote. 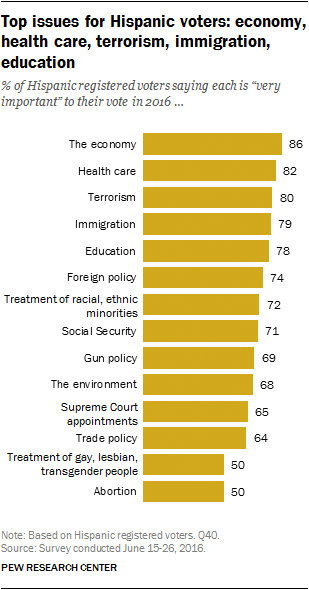 Though immigration policy is a top priority for many Latino-Americans, Tyler Moroles, an interim co-chair with the Minnesota Latino DFL Caucus, said that other issues of importance include economics, health care and employment opportunities. “Latinos are not just interested the issues of immigration,” he noted. “Eighteen percent of Latinos in America are undocumented, but the rest are citizens.”

Another report from the Pew Research Center amplifies Moroles’ sentiment. It found that 86 percent of Hispanic voters nationwide say that economy is a key factor in their decision to vote, followed by health care, terrorism and immigration.

At the Independence Day celebration, Ricardo Carmona was among nine volunteers with MIRAc helping potential voters learn about their rights and responsibilities. “We’re inviting everybody to come over here and get some information [about voting],” he said. “Everybody has the right to vote if they’re here legally. We need to let them know that their vote is going to help the people who can’t vote. They’re our voice.”

Heidi Romanish, a MIRAc founding member, said such efforts are a bit of a change for the group. “This is the first time we’re being more proactive about registering voters,” Romanish noted. “Normally that hasn’t been one of our activities. We believe that the power lies within the people organizing together — but not as much with the politicians.”

Members of the Minnesota Latino DFL Caucus were also at the event.  “We’re here because we can’t afford to stay on the sidelines anymore,” said Moroles, the interim co-chair of the Latino DFL Caucus. “We need to register any voter and take any opportunity we can to mobilize the Latino community to combat the xenophobia and nativism that’s rampant within our country and Minnesota.” 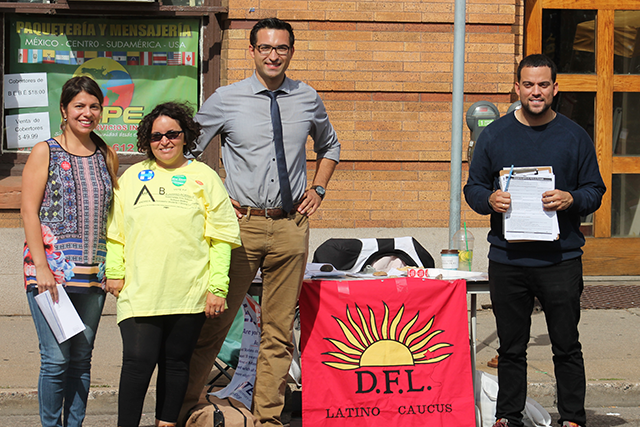 In addition to mobilizing the community and registering voters, Moroles said, the group has been fundraising for Latino candidates and helping to shape the DFL’s agenda. Like other Latino groups, the caucus has also been reaching out to the estimated 18,000-45,000 undocumented Latino immigrants who live and work in Minnesota.

“We’re making it clear that if you’re undocumented, you can still be involved,” he said. “A lot of people say, ‘Oh, I’m undocumented. I don’t want to be even near anything that has to do with voting.’ But they should know now that it’s essential that we mobilize and get them even more involved and that’s why we’re volunteering — lit dropping, understanding and learning about what the Latino policies are.”

‘Let’s not just think about presidents’

The city of Minneapolis is also working with the city’s largest immigrant groups — Latinos, Somalis and Hmong — to educate new Americans about the voting process. Since May, Luz Francisco has reached out to thousands of immigrants through a dozen local organizations, as well as by door-knocking and attending meetings and community events. The training she offered included informing people about elections, voting requirements and ballot stations.

She talks to voters about issues that are most important to them. “We are not just helping them vote,” Francisco said. “But we want to know the reasons why they’re voting.” 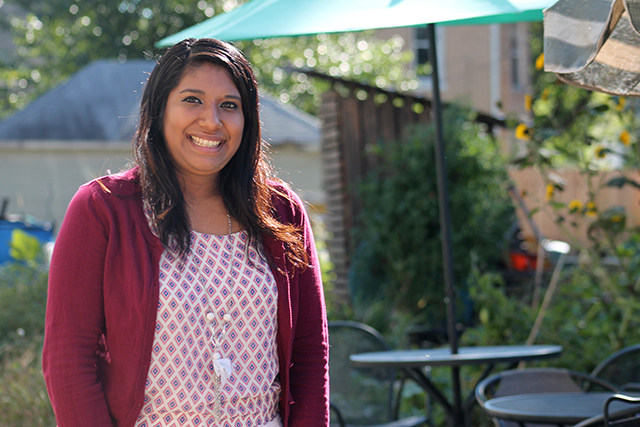 MinnPost photo by Ibrahim Hirsi
Luz Francisco, a community specialist with the city of Minneapolis, has registered thousands of Latino voters since May.

Francisco said she then makes sure that voters know their city and state representatives and how the decisions made at the Capitol and City Hall impact their day-to-day experiences. “Those are the people who are going to influence, to make the changes here,” she tells them. “When it comes to elections, let’s not just think about the president. Let’s think about what’s going to be a change for us in Minnesota.”