Each year around this time, student groups at the University of Minnesota promote their mission with panel paintings on the busy Washington Avenue Bridge, which connects the east and west banks of the Twin Cities campus.

This year’s “Paint the Bridge” event was completed on Friday. But one message from the university’s College Republican student group that read in part “Build the Wall,” sparked an uproar on social media and a protest.

On Friday evening, Minneapolis-based NAVIGATE MN — a nonprofit organization that advocates for undocumented immigrant students — posted the image on its Facebook page, saying that it “echoes the anti-Mexican, anti-immigrant racist rhetoric” of Donald Trump, the Republican presidential candidate.

On Saturday afternoon, the group led more than 150 immigration activists and student groups to the bridge in protest of the controversial painting, which also drew criticism from University of Minnesota President Eric Kaler and state Sen. Kari Dziedzic.

“This political campaign is turning people against one another and is using the tool of dehumanizing other human beings for political gain,” said Emilia Gonzalez Avalos, of NAVIGATE MN, at the protest. “Your free speech hurts … and marginalizes people. There [should be] a line.”

Protesters gathered around the panel painting, which was later overwritten with the words “Stop White Supremacy” — an act of vandalism that many protesters condemned. “I don’t like vandalism,” Dziedzic said. “They have their free speech, and we have our free speech. But I think we can reach out and we can be louder.”

She added: “As the granddaughter of Polish immigrants and Irish immigrants, I think we need to be building bridges … not walls. That’s kind of what America is. This is where people have opportunities. We don’t care what your background is, and we don’t care where you came from. We all came from some place else.” 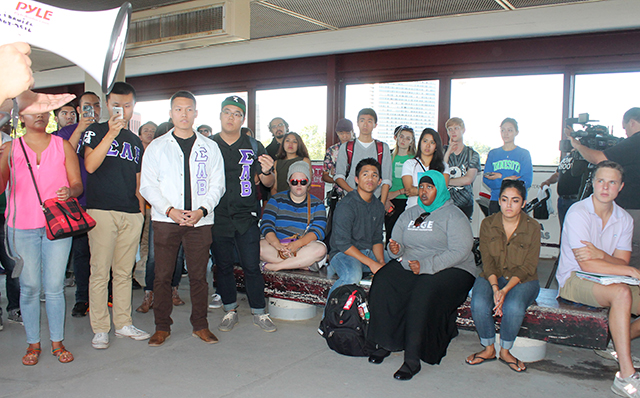 MinnPost photo by Ibrahim Hirsi
On Saturday afternoon, more than 150 immigration activists and student groups gathered in protest of the controversial painting.

In a statement released on Saturday, the president of the Republican student group, Madison Faupel, responded to both the allegation and the vandalism. “We have received comments on the painting, falsely accusing us of being racist, xenophobic and anti-immigrant,” she said. “Our party’s nominee supports building a wall on the Mexican border to stop the flow of illegal immigrants into this country. We understand that some students may disagree with this policy position. However, free speech is at the center of a functioning democracy, and the action taken against our panels runs contrary to free speech.”

Kaler, the U of M president, also sent a statement to the students and faculty members prior to the Saturday protest. “The University of Minnesota supports a campus climate that welcomes all members of our community and our values of equity and diversity,” he said, “but that also ensures the free flow of ideas, even those that are offensive to some.”

He added: “People in our community may disagree with the sentiment expressed. However, while the University values free speech, the subsequent vandalism of the panel is not the way to advance a conversation.” 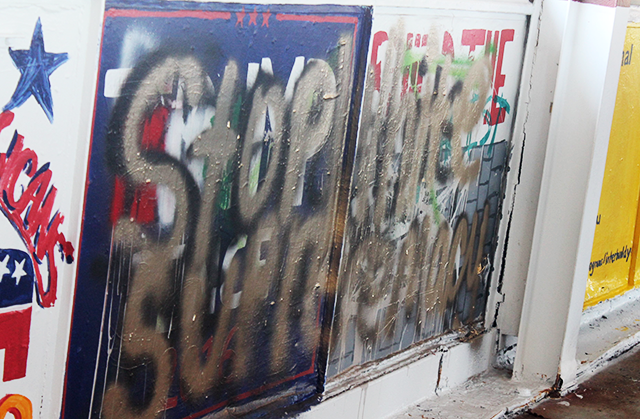 MinnPost photo by Ibrahim Hirsi
University of Minnesota President Eric Kaler: “While the University values free speech, the subsequent vandalism of the panel is not the way to advance a conversation.”

‘Build the Wall’ mural at University of Minnesota sparks protest