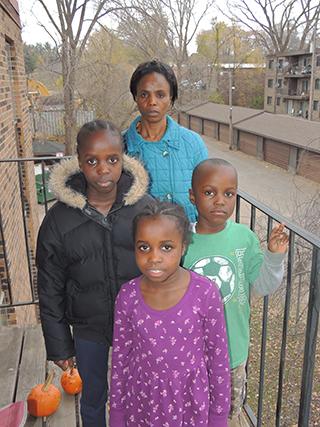 MinnPost photo by Gregg Aamot
Amina Marundu, in back, and her children – 11-year-old Jamila Dauda, 8-year-old Muhammedi Dauda and 9-year-old Salufa Dauda (back-to-front), on the deck of their apartment in St. Paul.

In August, when Dauda Bushiri, Amina Marundu and their three children, Muslim refugees from the Congo, arrived on a flight at Minneapolis-St. Paul International Airport, 20 Episcopalians were there to greet them.

Indeed, the congregants from St. John the Evangelist Episcopal Church had already arranged for the family to move into an apartment off of Larpenteur Avenue on the northeast side of St. Paul.  And within days, the church group got the children signed up for school – the two girls at the Saint Paul Music Academy and the boy at Murray Middle School.

“There is so much to do – in terms of transportation, or getting documents translated, or getting clothing for the family or arranging for the Internet,” said David Borton, a church member who cochairs the committee that is helping to resettle the family.

St. John the Evangelist, which sits on a corner near Summit Avenue in St. Paul, is one of several churches that have partnered with the Minnesota Council of Churches in co-sponsoring refugee families. With guidance from the MCC – an ecumenical Christian organization – individual congregations are paired with a single family and spend about four months helping that family get settled.

So far this year, according to the state Department of Human Services, about 2,500 international refugees have arrived in Minnesota from more than two dozen countries.  Of those, about 1,100 are from Somalia and about 550 are from Burma (also known as Myanmar). Just a handful are from the Democratic Republic of Congo (formerly known as Zaire), a politically unstable country in central Africa.

The Minnesota Council of Churches has matched a dozen churches with refugee families over the past year and is adding about one co-sponsoring church each month, according to Ben Walen, a division director for refugee services for the MCC.

Many churches are eager to help, he said.

“I think there has been a rejuvenation of sorts in the last year or two, given the worldwide attention that has been given to refugees,” Walen said.  (While much of that focus has been on refugees from the civil war in Syria, just 21 Syrian refugees have come to Minnesota this year, according to Department of Human Services statistics). 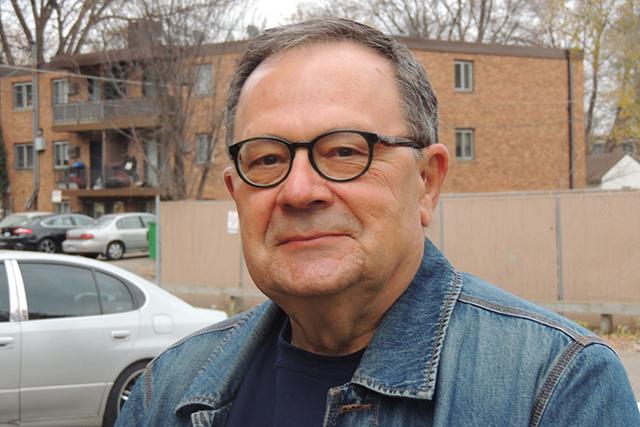 Refugees receive a federal stipend of about $1,000 apiece when they arrive in the United States, Walen said. The MCC provides families with some additional cash and follows that up with money for food and other necessities; co-sponsoring churches are free to offer financial help, as well, but largely focus on the kind of day-to-day support that can help a family feel secure.

To emphasize self-sufficiency, the church support tapers over the four months, ending with a closing ceremony.

“What churches can also do is build those relationships that can last longer,” Walen said.  “They can extend a welcome to Minnesota in a more lengthy fashion so that people can really engage with a community. Churches are well-suited to offer that kind of welcome.” 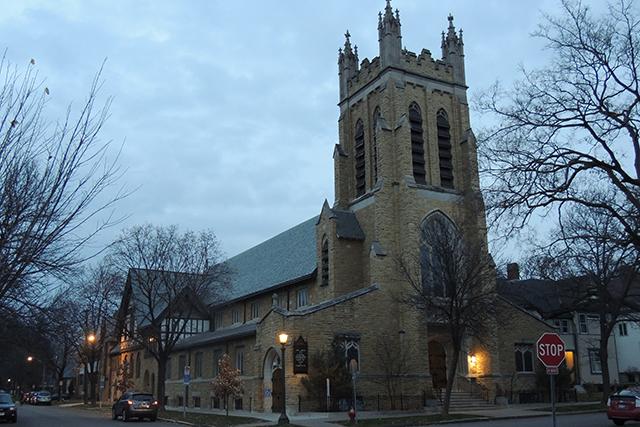 MinnPost photo by Gregg Aamot
St. John the Evangelist Episcopal Church, which is located near Summit Avenue in St. Paul.

On a recent November afternoon at the Congolese family’s apartment, the oldest child, 11-year-old Jamila, talked about her favorite subject, math, and how she couldn’t wait to see snow for the first time. (In a sign of cultural differences, Marundu, the mother, declined to discuss the family’s life in Minnesota without the presence of her husband, who was at his custodial job at G.O. Fresh).

With the help of an interpreter – a Congolese student from Macalester College – Borton asked Marundu how things were going and looked over some documents that had arrived in the mail.  He hugged all of the children.

The refugees have met with a few groups at St. John the Evangelist, cultural exchanges that have proved to be enriching.  Of the experience, Borton said: “It really bonds and brings people in the church together.”