Eight years ago, when Fatimah Hussein started working at Minneapolis’ Brian Coyle Center, she often saw teenage boys playing basketball in the gym, while girls at the center passed the time roaming in the library room or the computer lab.

The reason, she said, was because the girls — almost all of whom came from Somali or Oromo backgrounds — felt they didn’t have a place in sports. “Any girl who goes to the gym was questioned because it was a place where boys were being boys,” which defied the community’s cultural norms discouraging opposite genders from mixing together, said Hussein, now a social worker with Ramsey County.

In response, Hussein eventually established a program, Girls Initiative in Recreation and Leisurely Sports (GIRLS), to provide young women in the Cedar-Riverside neighborhood with an opportunity to be active in a “culturally-appropriate” setting, which included securing a five-hour slot on Sundays and Wednesdays at the Brian Coyle Center for the girls to have the court to themselves.

But it wasn’t long before Hussein realized that the players wanted more. They found the games at Brian Coyle isolating, and began to ask about how they could participate in competitive games with and against other players — while still preserving their culture. “Muslim girls want to play sports,” Hussein said. “They want to do what other girls are doing. But there are barriers.”

Now, that simple idea has blossomed into a company called Asiya, a local startup created to design sportswear for Muslim women across the United States.

The Cedar-Riverside neighborhood houses the largest Somali and Oromo communities in the United States — predominantly Muslim groups whose women and girls cover their whole body when in the presence of men they aren’t related to.

For this reason, young women from the community are often reluctant to play sports and risk showing their hair, legs and arms during games. Which didn’t mean they weren’t interested in playing. When Hussein created the GIRLS program, she says, she found dozens of teams — ranging from third-grade through high school aged girls — interested in basketball and other sports.

In order to participate while still observing their community’s cultural norms, many girls wore their long skirts and long sleeved shirts and headscarves while playing, which made play uncomfortable — and difficult. “We’ve often heard from Muslim girls that the flowing headscarves and dresses they traditionally wear are a barrier to participating in sports and fitness activities,” wrote Chelsey Thul, a lecturer at the University of Minnesota’s School of Kinesiology, in a 2015 blog entry about her volunteer service with GIRLS. “The girls find themselves spending more time trying to hold their skirts or scarves in place than they do actually playing.” 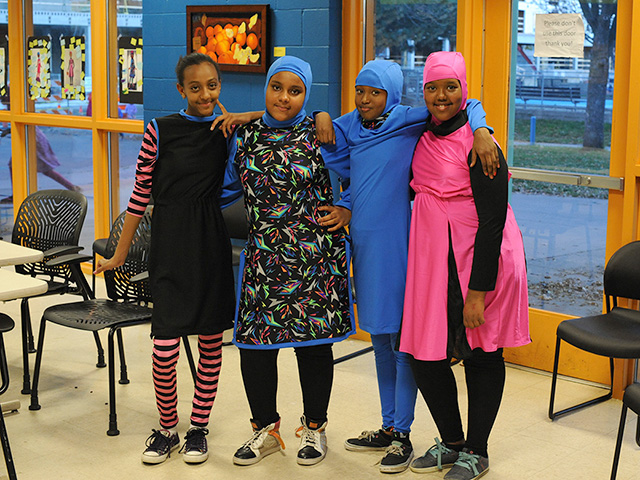 Courtesy of GIRLS
With support from U of M’s College of Design and the Minnesota Agricultural Experiment Station, the GIRLS program designed sportswear for Muslim girls in Minneapolis.

She added: “This got me thinking, ‘What if we could work with the girls to co-design athletic wear and uniforms that provided freedom of movement while allowing them to remain covered up?’”

The question sparked the idea to design culturally appropriate sportswear for East African girls, including athletic pants, knee-length skirts and unique headscarves. With the help of a $120,000-grant from the Minnesota Agricultural Experiment Station, the project ultimately involved the GIRLS program, University of Minnesota’s College of Design and a host of volunteer athletes and parents from the community.

“The girls sat down with students from the College of Design, who helped translate their ideas into practical designs,” Thul wrote. “We then held a community gallery walk event where the girls, their parents and community members could provide feedback about the concept designs and vote for their favorites.”

A company is born

When the project ended last year, Hussein decided to improve the design and expand the sportswear to Muslim women athletes across the United States and the rest of the world by creating a new company: Asiya.

The startup is currently working with a Minneapolis-based designer to create the company’s offerings, which now include three kinds of hijabs: One that covers only the hair (for those who are OK with showing their neck); one that covers the head and neck; and another that’s a little looser, covering both the head and neck.

In September, Asiya received $65,000 in grants from the Minnesota Cup’s entrepreneurship idea competition, which Hussein said the company will use to market and manufacture its goods. And two weeks ago, Asiya launched a Kickstarter campaign that has already raised more than $23,000 of the company’s $25,000 goal to use for further design and production efforts. By early next year, Asiya plans to have its products available through its website. For now, however, shoppers can pre-order items through the Kickstarter campaign site.

Given that Asiya has only just gotten off the ground, co-founders Hussein and Jamie Glover say they’re still figuring out the details of the company operations. But they know that Asiya will not have a physical location. “Outside of our website, we anticipate selling through some specialty retailers, targeted shopping centers and other places where people might be looking for this kind of active wear,” said Glover, a longtime marketing professional and current MBA student at the Carlson School of Management.

“We’re now just exploring getting feedback from people,” she said. “We are excited about a few different options of doing custom sports uniforms of different kinds of sports, including soccer and basketball. But we’ve also received a lot of requests for general active wear and also for swimwear.”

In fact, over the past several months, some Fortune-500-companies have contacted Asiya’s founders to talk about designing clothes for their female Muslim employees working in assembly lines. “General Mills contacted us,” Hussein said. “That’s really more than what we expected. Now, we know that we can help a lot of women who are working in assembly lines and are doing janitorial work.” 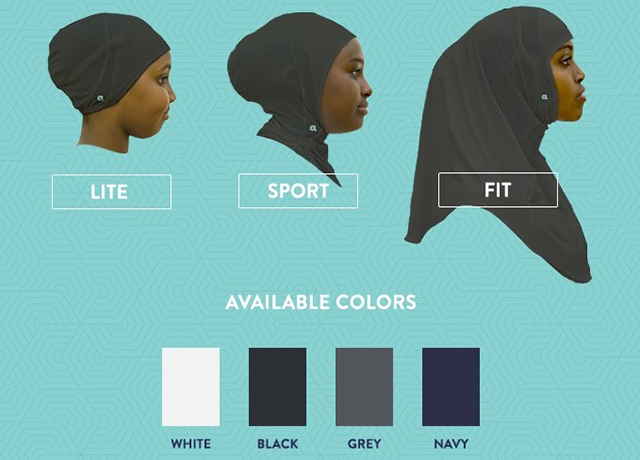 Courtesy of Asiya
Asiya is currently working with a Minneapolis-based designer, who has created different styles and colors of sportswear for Muslim-American girls across the country.

Yet the founders remain focused on sports, for the simple reason that they believe it provides a real boost to young women. Hussein cited a 2014 report, “Making the Connection: Women, Sport and Leadership,” which revealed that 94 percent of female executives played sports in grade school and in college — and are more likely to hire women who participated in sports programs.

Another report, published two years ago in The Atlantic, also echoed a similar sentiment. Authors Katty Kay and Claire Shipman wrote that “girls who play team sports are more likely to graduate from college, find a job, and be employed in male-dominated industries.”

That was the experience of Glover. “Sports has been critical in developing leadership skills that have transferred to my career and my self-confidence and my ability to really prosper after sports have ended,” she said. “So, I’m really passionate about just helping more girls have those opportunities and to be on teams and to build those skills to set them up for future success.”

Hussein, who says she knows of a number of Muslim women who are breadwinners of their households, noted that — through Asiya — she also wants to inspire young Muslim girls to get involved in sports at a younger age.

“When girls are playing, the way they smile and the way they build relationships with one another just makes me happy,” she added. “Asiya is about encouraging young girls to be proud of who they are — and to say to them, ‘Your religion and your clothes should not prevent you from being physically active.’”