In recent months, one common theme has wended its way through various reports about the presidential election: that Republican candidate Donald Trump’s anti-immigration and anti-Muslim rhetoric could potentially drive record numbers of new Americans to the polls on Election Day.

And it’s true that in Minnesota and nationwide, activists have spent months organizing citizens from those communities to register to vote in hopes of defeating Trump, who has proposed the construction of a wall along the U.S.-Mexico border; the mass deportation of undocumented immigrants; and the banning of Muslim refugees from entering the United States.

If they do show up at the polls, those voters in Minnesota can expect a bit of a helping hand, as state and local election officials have been working since the beginning of this year to attract more bilingual election judges to work at polling places, and specifically to work with voters from East Africa, Southeast Asia and Latin America, which make up some of the largest immigrant communities in the state.

In Minneapolis, the city has hired more than 100 employees to help with the primary and general elections, said Anissa Hollingshead, a communications and outreach manager with the city government. Those positions include community specialists, absentee ballot assistants and voting equipment technicians.

Dursitu Agamso, who has been employed with the city of Minneapolis as an election specialist since June, is one of many who have served at the city’s polling stations, greeting voters and assisting them fill out ballots.

While many new American voters are well-educated and well-informed about the electoral process, there are also many who will be voting for the first time — or who are struggling with reading and speaking English. “Since they don’t speak English and can’t read what’s on the ballot, I read for them,” said Agamso. “When I read, they recognize the name. They heard the names in the media and from campaign workers. They say, ‘Where is his name or her name?’ I tell them, ‘It’s here.’ Then they say, ‘Can you circle that name for me?’”

The city has also worked on recruiting up to 2,500 more people to staff polling stations across the city on Election Day as election judges — especially those who are fluent in a second language, including Spanish, Somali, Hmong, Oromo, Lao and Vietnamese. 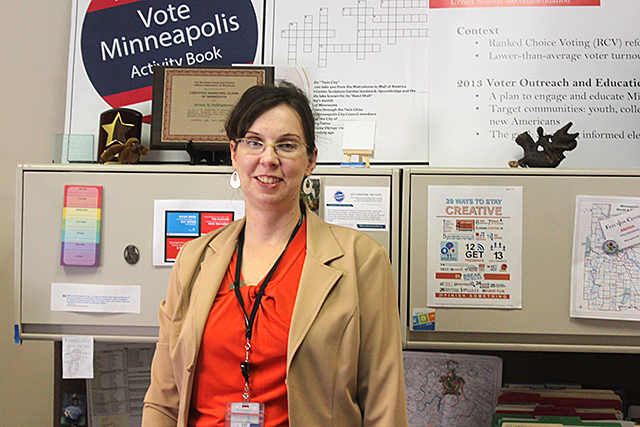 MinnPost photo by Ibrahim Hirsi
Anissa Hollingshead, a communications and outreach manager with the city of Minneapolis, says bilingual election judges have become more in demand in recent election seasons.

But it’s not only Minneapolis where election judges are in demand. Minnesota Secretary of State Steve Simon has been active in recent months in recruiting and providing resources for voters all over the state whose English isn’t their first language. “There is a huge demand for bilingual election judges … and Minnesota must meet that demand,” Simon stated in a statement. “I encourage Minnesotans to consider applying and taking part in this civic opportunity.”

In addition to hiring bilingual elections judges, earlier this year the secretary of state’s office announced “the largest collection of foreign language voter resources ever” would be made available to voters. Those resources include voter information in over a dozen foreign languages, including: Amharic, Chinese, Hmong, Khmer, Lao, Oromo, Russian, Somali, Spanish, Vietnamese and Karen.

While the ballots are only printed in English, this is hardly the first time that Minnesota has provided election materials in foreign languages. The first began to provide voting information in languages other than English in 1896, when the state made voting instructions available in German, Finnish, Polish, Bohemian, French and Swedish.

“As the son of an immigrant, I know how important it is to provide our new Americans with voter resources in their native language,” Simon noted in the statement. “We should do everything we can to provide eligible voters with the information they need to vote, and this is an important step in that direction.”